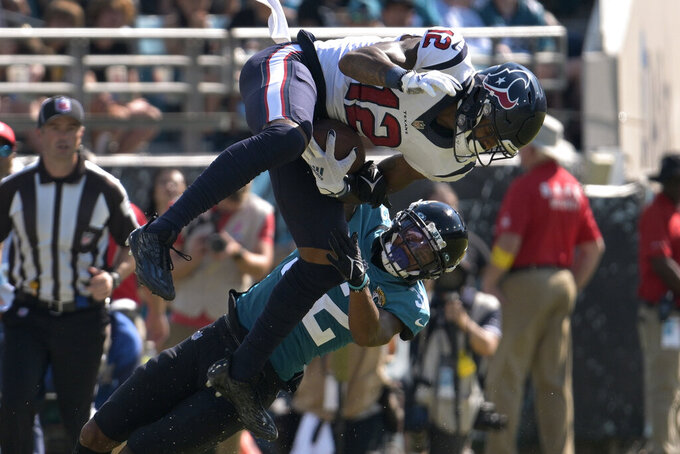 JACKSONVILLE, Fla. (AP) — Dameon Pierce initially got hit behind the line of scrimmage. He slipped Rayshawn Jenkins' tackle and then six or seven more on his way to a 20-yard gain that was more impressive than the rookie's 75-yard touchdown run a week earlier.

And he could be a handful for Jacksonville for years to come.

Pierce ran for 99 yards and a touchdown, a score set up by his determined fourth-quarter scamper through half of Jacksonville's defense, and the Texans beat the Jaguars 13-6 on Sunday to extend their winning streak in the series to nine.

“Go country boy, go," Pierce said, recalling his thoughts at the time. "I was trying to get to that touchdown. I know I had them big boys coming, eventually. They were going to run behind me at some point. So I was just trying to fight to get in the end zone.”

Houston (1-3-1) picked up its first win of the season — first under coach Lovie Smith — and fifth straight in Jacksonville despite finishing with 248 yards. The Jaguars (2-3) managed 422 yards but had a turnover and two field goals in three trips inside the 20-yard line.

The Texans got a huge assist from the top pick in April’s NFL draft. Jaguars linebacker Travon Walker slung quarterback Davis Mills to the ground after whistles stopped a third-and-20 play. Walker was going to be flagged for a neutral-zone infraction and penalized 5 yards. But his inexcusable mistake gave Houston 15 yards and an automatic first down.

“He's a smart kid; he knows what he did," veteran Jaguars linebacker Foye Oluokun said. "I'm not going to beat him down him for it. We all hold each other accountable. I'm not going to be mad at him for playing hard. I don't want to take that edge off him. Just play smart in that situation.”

Walker said he unaware the whistle had blown.

“Just playing ball,” Walker said. “Very disappointed in myself but, you know, moving on to next week.”

Pierce took it from there. The former Florida standout who played collegiately about 75 miles west of Jacksonville made the Jaguars look silly on his longest run of the day. He slipped through Jenkins' hands and then eluded Oluokun, Tyson Campbell, Darius Williams, Shaquill Griffin, Andre Cisco and Devin Lloyd before Dawuane Smoot finally got a hold of his right ankle.

Pierce even escaped Smoot's grasp before Campbell and Cisco finally brought him down just shy of the goal line. Pierce scored up the middle two plays later, putting the Texans up 13-6 in an otherwise ugly game that up to that point featured four field goals, eight punts and 10 penalties.

“It’s fitting that he would, when we needed a play like that, he would be the one that showed up," Smith said. "It's late in the game. Somebody’s got to make a play and (there’s) no such thing as fatigue. I can talk about Dameon Pierce quite a bit. You know, I just believe in the guy.”

It's hard to fully believe in Trevor Lawrence after the last two weeks.

Jacksonville's second-year starter, coming off a five-turnover game at Philadelphia, completed 25 of 47 passes for 286 yards and two interceptions. Rookie rookie Derek Stingley Jr. picked off Lawrence's pass in the end zone to end the opening drive of the second half — a huge turning point in the game.

“At the end of the day, we've got to finish games,” Lawrence said. “It hurts. ... It's frustrating, but we're going to get better. We can't panic. We're a good football team and we believe that. We just got to play like it. We didn't play like one today. We played bad.”

The halftime presentation was the highlight of the franchise’s “Legends Weekend.” Nearly 100 former players were on hand to see Boselli honored. The team also released a 40-minute documentary titled “71,” which chronicles Boselli’s life and playing career. Boselli wore his gold Hall of Fame jacket during the ceremony and was flanked by his bronze Hall of Fame bust.

Jaguars LG Ben Bartch and LB K’Lavon Chaisson left the game with knee injuries. … Both teams played without one of their best defensive linemen: Houston was without Jon Greenard; Jacksonville was without Foley Fatukasi.

Jaguars: Play at Tennessee, where Jacksonville has lost eight straight.