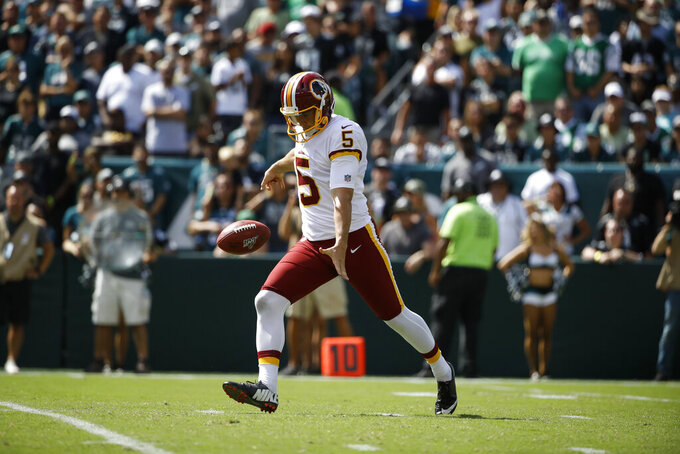 FILE - In this Sept. 8, 2019, file photo, Washington Redskins punter Tress Way is shown during an NFL football game, in Philadelphia. A popular Redskins podcast is trying to send Washington punter Tress Way to the Pro Bowl. Way leads all NFC punters in net yards and has pinned opponents inside the 20-yard line 24 times this season. (AP Photo/Matt Rourke, File)

ASHBURN, Va. (AP) — Tress Way has punted the Washington Redskins out of plenty of trouble this season.

Now, a popular podcast is trying to pave his way to the Pro Bowl.

Way is the central figure of a campaign by the “Redskins Talk” podcast to send one of Washington's most valuable players to the Pro Bowl in January. He leads the NFL in yards per punt and is tops among qualifying NFC punters in net yards this season.

“We're No. 1 in net and No. 1 in gross,” said long snapper Nick Sundberg, who inspired the push to get Way to Orlando. “I think he's deserved it for a couple years.”

Way has pinned an opponent inside its 20-yard line 50 times the past two years and booted it into the end zone for a touchback just twice in 145 attempts over that time. The Redskins are 3-10, but Way more than anyone is doing his job at an All-Pro level, and the franchise hasn't had a All-Pro selection in two decades.

Whether Way ends that dubious distinction during Dan Snyder's ownership remains to be seen. But Sundberg hoped the podcast's platform could pull in a few votes for the 29-year-old at the top of his game.

"He's easy to root for, and the numbers back up he should go to the Pro Bowl, so it's like, why not try to help?" said J.P. Finlay, one of the hosts of the NBC Sports Washington podcast. “It's kind of just a fun thing. I don't think we would ever advocate for a player to make the Pro Bowl, but being the punter and being such a good-spirited dude, it's just a little different.”

Way didn't become one of the Redskins' top players overnight. Former special teams coach Ben Kotwica challenged Way to improve his pooch-punting game, and the result has been plenty of perfectly placed punts.

But Way was quick to credit first-year special teams coach Nate Kaczor and Washington's coverage units for his numbers being so impressive.

“There's been some awesome punts and putting them in the corner and making returners have a tough time, but there has been some times where I have out-kicked the coverage, been right down the middle of the field and our guys just swarm on to these really good returners and have completely flipped the field,” Way said. “These guys have bailed me out of some trouble."

Fan voting ends this week and makes up a third of the total for the Pro Bowl. Players and coaches make their selections Friday.

Way referred to Sundberg as his “hype man," but Finlay said part of this is also a nod to the 32-year veteran who could get a Pro Bowl trip out of it.

“If I was fortunate enough to go, I would love to try and lobby so that Nick could come with me,” Way said. “Because Nick's played 10 years here with the Redskins alone and obviously is one of the best in the league and never had the chance to go.”