Pressure building on Saints, Raiders as they meet in Week 8 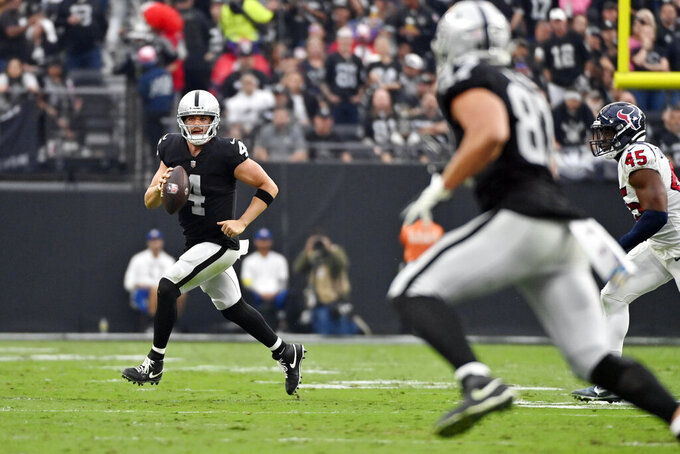 NEW ORLEANS (AP) — Saints coach Dennis Allen had little to say this week about his personal history with New Orleans' next opponent.

After all, the Raiders have seen many changes — including relocation from Oakland to Las Vegas — since Allen's firing four games into the 2014 season.

Meanwhile, Allen's current team has lost five of six and is increasingly desperate for better results, regardless of who's on the opposite sideline this Sunday in the Superdome.

“We need to get a win," Allen said when his time with the Raiders was brought up. “That's really what our focus is.”

When Allen took his first head coaching job in Oakland in 2012, the Raiders were in transition. Owner Mark Davis was taking over for his late father, Al, and made Reggie McKenzie the club's new general manager.

By contrast, the Saints had posted five straight winning records when former coach Sean Payton retired last offseason and was replaced by Allen, who'd been his defensive coordinator since late in the 2015 campaign.

Allen also had won a Super Bowl in New Orleans as a secondary coach in 2009, so he's had plenty of experience working under Saints general manager Mickey Loomis and alongside a number of former Payton assistants who've been retained.

But while Allen's second chance came in a more stable situation, the winning part has again proved difficult.

The good news for the Saints (2-5) is they remain just one game out of first place in the NFC South, a division in which every team as a losing record. That fact was not lost on Saints running back and offensive captain Alvin Kamara, who spoke to the team after last week's mistake-filled loss at Arizona.

“We got to get our swag back — and what better time?” Kamara said. “Everything we want is still in front of us. I think it's just realizing what we are, what we want to be and being there.”

The stakes are arguably higher for the Raiders (2-4), who are coming off a victory over Houston, but still trail Kansas City by 2 1/2 games in the AFC West and are 1 1/2 games out of the wild-card picture.

Like Allen, the Raiders' Josh McDaniels is in the first season of his second stint as a head coach and has endured some excruciating losses this season. The Raiders' four losses each have come by six or fewer points.

Likewise, four of the Saints' losses have come by eight or fewer points and their worst loss came by 10 points (against Tampa Bay) in a game that was tied until the middle of the fourth quarter.

“So, very similar to us, they’ve been in a lot of close games,” McDaniels said. “And playing down there on the road in this stadium is always a big challenge. It’s going to be noisy. That’s always an added burden when you go in there.”

The Raiders' offense has gotten a big jolt in recent weeks from the play of running back Josh Jacobs. He has rushed for 441 yards and six TDs the last three games — the best stretch of his career.

This is just the eighth time since the merger a back has run for at least 140 yards and a score in three straight games. Last week, seven of Jacobs' carries went for at least 10 yards.

Allen decided to stick with Andy Dalton at QB for a fifth straight week — even though season-opening starter Jameis Winston was deemed healthy enough to return from back and ankle injuries.

The Saints have averaged 31 points per game during Dalton's four starts, but also have gone 1-3 in that span.

“It’s hard to see all the things we’ve done well because we haven’t won,” Dalton said. “We’ve been really balanced offensively. We've been able to run the ball well. We've been effective on third downs. We've been able to score. ... We've got to find ways to turn the positives into wins.”

Raiders quarterback Derek Carr was drafted by the Raiders during Allen's final year with the club. Allen made Carr his starter that year but was fired following an 0-4 start. Carr says he still keeps in touch with Allen.

“He’s a brilliant mind, really smart, cerebral, can break down an offense, can really put pressure on quarterbacks,” Carr said. “I had a great relationship with him. We had open communication for the short time that we had, and I’ll never forget it. He gave me my chance in this league, and I’ve told him 100 times and I’ll tell him 100 more times how thankful I am."

The Saints point to their own mistakes when identifying what has cost them most in their five losses. New Orleans leads the NFL with 16 lost turnovers and has an NFL-worst turnover differential of minus-10.

While plenty of blame falls on offensive blunders, defensive players and coaches have lamented their own lack of forced turnovers, compounded by too many missed tackles.

“It's paying attention to the minutia, the minor details,” Saints defensive end Cameron Jordan said. “It's not having the feeling of wanting to do more. It's doing your job.

“If you've got to hold your teammates accountable, that's what you have to do,” added Jordan, a team captain. "There's been a lot of that this week."