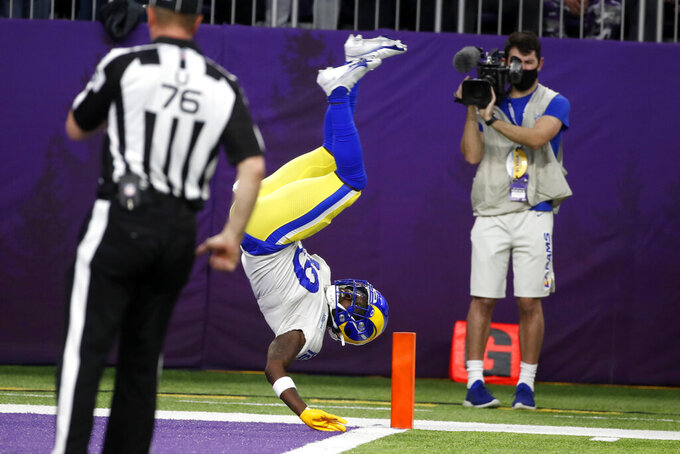 Los Angeles Rams' Brandon Powell flips into the end zone during a 61-yard punt return for a touchdown in the second half of an NFL football game against the Minnesota Vikings, Sunday, Dec. 26, 2021, in Minneapolis. (AP Photo/Bruce Kluckhohn)

MINNEAPOLIS (AP) — Before Brandon Powell joined the Los Angeles Rams last month, his fifth team in four NFL seasons, he read books on the beach near his Florida home while waiting for yet another chance.

This was quite the chapter, helping clinch a spot for the Rams in the playoffs.

Powell returned a punt 61 yards for a touchdown in the third quarter to lift the Rams at just the right time on the way to a 30-23 victory over the Vikings on Sunday that also secured a postseason berth for Arizona.

“I just did the easy part. I just caught the ball and ran the ball up the sideline,” said Powell, who was on the active roster for the Rams for only the fourth time.

Little has been easy lately for the Rams (11-4), who won their fourth straight game and passed the Cardinals (10-5) for first place in the NFC West.

Ravaged by COVID-19, their previous game was moved to Tuesday, giving them only four days of rest. Matthew Stafford was out of rhythm during his first three-interception game since Sept. 10, 2018, when he was picked off four times for Detroit against the New York Jets.

The Rams still had more than enough to win.

Sony Michel rushed for a season-high 131 yards and a score, Matt Gay made three field goals, and the Aaron Donald-led defense did its part by keeping the Vikings out of the end zone on two first-half trips inside the 10-yard line.

With the punt return by Powell, an interception by backup linebacker Travin Howard and an emergency debut at left tackle for undrafted rookie Alaric Jackson, the Rams enjoyed plenty of down-the-roster contributions in addition to the usual excellence from stars like Donald, Jalen Ramsey and Cooper Kupp. That's how a team puts itself on track for a division title.

“There’s adversity that’s going to come inevitably for each phase of this team. That’s life. That’s football,” Kupp said. “You’ve got to be able to take the ebbs and the flows and pick each other up.”

Anthony Barr picked off Stafford twice, both deep in Rams territory, and the Vikings turned those picks into 10 points. Stafford went 21 for 37 for 197 yards and a fourth-quarter touchdown pass to Odell Beckham Jr., but he was out of sync for most of the game with several other throws that could’ve been intercepted.

Kirk Cousins had 315 yards on 27-for-38 passing for the Vikings with a touchdown to K.J. Osborn with 8:21 left that cut the lead to 27-20. His interception in the first quarter loomed large. Howard picked off a pass intended for Osborn that was deflected in tight coverage at the goal line.

That drive was the only one of the Vikings' first nine possessions that went longer than 15 yards, a disservice to a defense that kept the Rams in check for much of the afternoon.

“We definitely let them down. I felt like they played a tremendous game, especially with those three turnovers. We’ve got to find a way to get in the end zone,” wide receiver Justin Jefferson said.

Cousins' interception was his fourth in the last three games. He was picked off only three times in the first 12 games.

Alexander Mattison filled in for COVID-19-absent Dalvin Cook and had 70 total yards and a score for the Vikings (7-8), who failed for the fourth time this season to push their record above .500. They lost control of the third and final NFC wild-card spot.

Cousins was the sharper quarterback, coming off a couple of rough games, but he still couldn't get the Vikings a win they badly needed.

“It’s disappointing, because with a win here today you do control your destiny,” Cousins said.

Powell gave the Rams their first non-offensive touchdown of the season, their first special teams return score since Pharoh Cooper in 2017, and their first punt return touchdown since Tavon Austin in 2015 when they still played in St. Louis.

Jalen Ramsey kept Jefferson on lockdown much of the game, but he still had eight catches for 116 yards. Jefferson passed fellow LSU alum and pal Beckham for most receiving yards in a player's first two seasons (2,851). Beckham had 2,755.

Kupp had a 37-yard reception on third down in the fourth quarter to help put the game away. He had 10 catches for 109 yards to become the first player with at least 90 receiving yards in 14 games of a single season. Antonio Brown (2014) and Michael Irvin (1995) did so in 13 games.

Rams: LB Ernest Jones (ankle) was hurt in the first quarter and didn't return. ... C Brian Allen (knee) limped off in the second quarter, forcing a further shuffle of the offensive line. Coleman Shelton, who started at LG with David Edwards shifted to LT, took over for Allen. When Edwards moved back to LG, Jackson entered at LT. Starting LT Rob Havenstein and backup Joe Noteboom were both out with COVID-19. ... NT Greg Gaines (hand) departed in the third quarter. ... RB Darrell Henderson Jr. hurt his knee in the fourth quarter on his only carry, a 17-yard gain.

Vikings: WR Adam Thielen (ankle) returned from a two-game absence with three catches for 40 yards, but he aggravated the injury twice and barely played in the second half. ... Cook was joined on the COVID-19 reserve list by backup QB Sean Mannion and backup OT Rashod Hill. ... With Mason Cole (elbow) on injured reserve, Oli Udoh returned to his original starting RG spot.

The Rams play at Baltimore (8-7) next Sunday.

The Vikings play at Green Bay (12-3) next Sunday night.