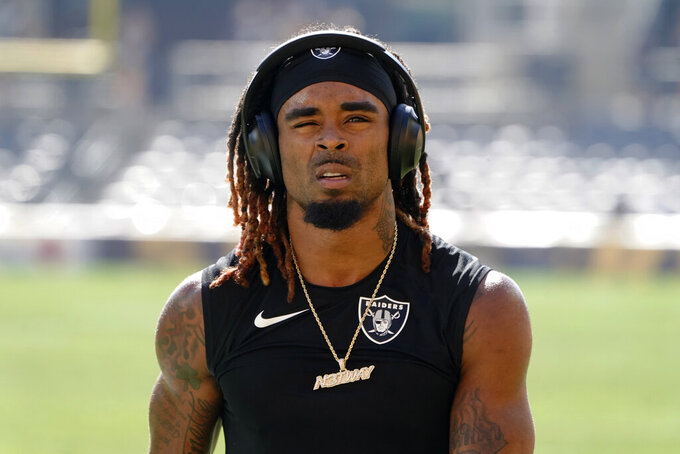 FILE - Las Vegas Raiders cornerback Damon Arnette warms up before an NFL football game against the Pittsburgh Steelers, Sunday, Sept. 19, 2020, in Pittsburgh. The Las Vegas Raiders waived 2020 first-round pick Damon Arnette and have now cut ties with both first-round picks from that draft before the midpoint of their second season. General manager Mike Mayock called it a “painful decision” to release Arnette on Monday, Nov. 8, 2021, but said it was necessary in response to a social media post with Arnette brandishing a gun and threatening to kill someone. (AP Photo/Keith Srakocic, File)

On the field, the first half of the season went almost as well as planned for the Las Vegas Raiders.

The defense has been much improved, Derek Carr has been more aggressive, and the Raiders are tied for first place in the AFC West even after a 23-16 loss to the New York Giants on Sunday.

Off the field has been a different story and how the Raiders (5-3) handle all of those issues might determine whether they can get back to the playoffs for just the second time in the past 19 seasons.

The promising start to the season with three straight wins over teams that won double-digit games last year has been followed by a tumultuous last month that started when offensive old emails from coach Jon Gruden were released by the Wall Street Journal and New York Times.

That led to Gruden's resignation on Oct. 11 and the Raiders responded by winning their next two games under interim coach Rich Bisaccia.

But after a week off for the bye, the problems only mounted. Receiver Henry Ruggs III was released last Tuesday following a fatal DUI crash. Authorities said Ruggs was driving 156 mph with a blood-alcohol level twice the legal limit in Nevada when his car slammed into another vehicle and killed a 23-year-old woman. He faces multiple felonies and jail time if convicted.

Cornerback Damon Arnette was then cut on Monday in response to a social media post in which he was brandishing a gun and threatening to kill someone.

The departure of the two 2020 first-round picks coupled with the loss that looked similar to late-season collapses the past two seasons have put a dent into the optimism surrounding the Raiders.

“I understand the perception from the outside looking in because of this past week,” general manager Mike Mayock said. "I get it. I understand it. But we couldn’t feel further from that perception. We think the truth is we got a good, young core. I love the way Coach Bisaccia is working with these kids, they’re all buying in. We had a bad day yesterday, but I can’t wait to see how we get challenged this week, how we challenge these players and how we come out and play against Kansas City.”

Pass rush. The biggest bright side this season has been on defense where Maxx Crosby and free agent Yannick Ngakoue have formed one of the NFL's best pass-rushing duos so far this season. Ngakoue has six sacks and Crosby has five. They have combined for the most pressures among any two teammates this season, according to Pro Football Focus.

Red-zone offense. The Raiders have vowed the past two seasons to improve their red-zone offense, without success. Las Vegas ranks 27th in converting red zone drives into TDs and those issues played a big role in the loss to the Giants. The Raiders got into the red zone six times but settled for one TD and three field goals. Daniel Carlson missed a short kick and Carr lost a fumble on the final drive.

Casey Hayward. New defensive coordinator Gus Bradley brought in several of his old players from previous stops to upgrade the defense. Hayward has been as important as any of them. He bounced back from a subpar 2020 season with the Chargers once again to become one of the top cover cornerbacks in the league.

Josh Jacobs. The 2019 first-round running back has been hampered by injuries again this season but hasn't provided the big plays he did as a rookie. Jacobs is averaging just 3.8 yards per carry and doesn't have a run longer than 15 yards on the season. He is coming off his most productive game of the season with 76 yards on 13 carries, which could bode well for the second half.

The offensive line took a hit early when left guard Richie Incognito hurt his calf in training camp and Denzelle Good has a season-ending knee injury in the opener. Incognito could be back in the next couple of weeks. The Raiders are also hoping to soon get back cornerback Trayvon Mullen and linebacker Nicholas Morrow.

23 — Carr is tied for the NFL lead with 23 completions that have traveled at least 20 yards downfield as his willingness to go deep has helped open up the offense. Carr's career high on deep completions was 29 set last year, and he had never had more than 15 through eight games before this season.

The Raiders signed DeSean Jackson on Monday to bring the speed element they lost when Ruggs was released. Jackson's 123 catches on deep balls are the most in the NFL since 2000.

The Raiders start a difficult three-game stretch when they host Kansas City on Sunday night, followed by a home game against Cincinnati and a Thanksgiving Day game at Dallas. Las Vegas then must make back-to-back trips to Kansas City and Cleveland in December.