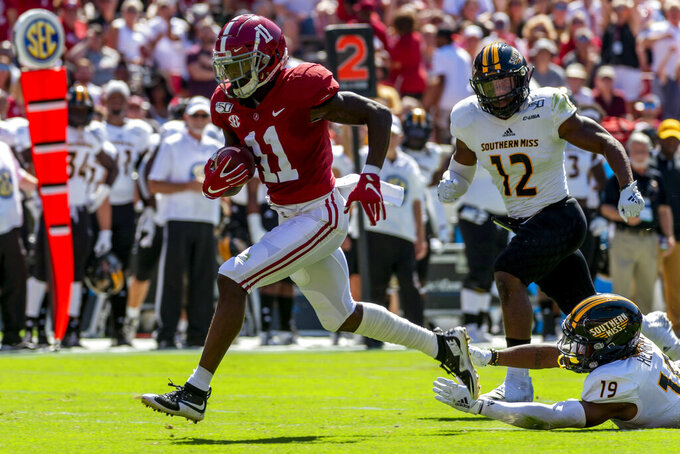 FILE - In this Sept. 21, 2019, file photo, Alabama wide receiver Henry Ruggs (11) runs in for a touchdown on a pass reception against Southern Mississippi during the first half of an NCAA college football game in Tuscaloosa, Ala. The Los Angeles Raiders selected Ruggs in the first round of the NFL draft. (AP Photo/Vasha Hunt, File)

Count quarterback Derek Carr as a fan of what the Las Vegas Raiders did in the NFL draft.

The Raiders spent the first two days of the draft gathering dynamic pieces on offense they hope can bring out the best in Carr.

They drafted the fastest receiver available in Henry Ruggs in the first round and added two other playmakers in the third round in the versatile Lynn Bowden Jr. and receiver Bryan Edwards.

“We’ve been texting back and forth over the weekend. It started with Ruggs pick. ... I got about five texts with ‘W-O-W-!‘” general manager Mike Mayock said Saturday.

“He was just fired up with that pick. Then we get Edwards and Bowden. I don’t even know how to make emojis. I was just looking at all these emojis like ‘I guess he’s happy, that looks good.’”

The Raiders spent much of free agency trying to upgrade the defense by signing linebackers Cory Littleton and Nick Kwiatkoski, safety Damarious Randall and defensive linemen Maliek Collins and Carl Nassib. They then added two cornerbacks in Ohio State’s Damon Arnette and Louisiana Tech’s Amik Robertson in the draft.

The big moves on offense came in the draft highlighted by the playmakers.

Whether all those moves are enough to help close the gap in the division with the defending Super Bowl champion Kansas City Chiefs remains to be seen.

The Raiders traded up 13 spots in the fourth round to take Clemson guard John Simpson at 109th overall. They gave up the 121st and 172nd picks for Simpson, who was a second-team All-American last season. The Raiders then drafted Louisiana Tech cornerback Amik Robertson 139th overall with their final pick.

Robertson brings confidence and good coverage ability to the Raiders. The 5-foot-9 Robertson had five interceptions and 17 passes defensed last season and has the traits to become a slot cornerback in the NFL.

He felt he slipped in the draft because of offseason groin surgery but aims to prove the Raiders were right to select him.

“They got the best DB in this class,” he said. “Ballhawk, corner, nickel, safety, whatever. The best hybrid in the class that can force turnovers and get ball back to the offense.”

The Raiders signed two guards in Jordan Devey and Eric Kush and then drafted Simpson. That doesn’t mean they’re looking to cut ties with right guard Gabe Jackson, who has been rumored to be on the trading block because of a salary of more than $9 million. Mayock said those moves are about depth not about Jackson’s status.

The Raiders didn’t have a pick in the final three rounds after trading up to get Simpson. Mayock said he considered moving down with the pick used on Robertson but decided against it. One of the reasons was he believes it will be challenging for rookies to make the team this year with no offseason program.

“The further down you get in the draft, the more concerns we had about a kid being able to compete, realistically compete to make the roster,” he said.

One of Mayock’s first scouting assignments when he was hired by the Raiders last offseason was the college championship game in the Bay Area between Clemson and Alabama.

Mayock joked that night that he could only draft players from that game and do well. Maybe it wasn’t a joke as he drafted two more former Clemson players this year with Simpson and third-round linebacker Tanner Muse.

“We’re all like brothers,” Simpson said of reuniting with his college teammates. “It’s a bond that you can’t break.”