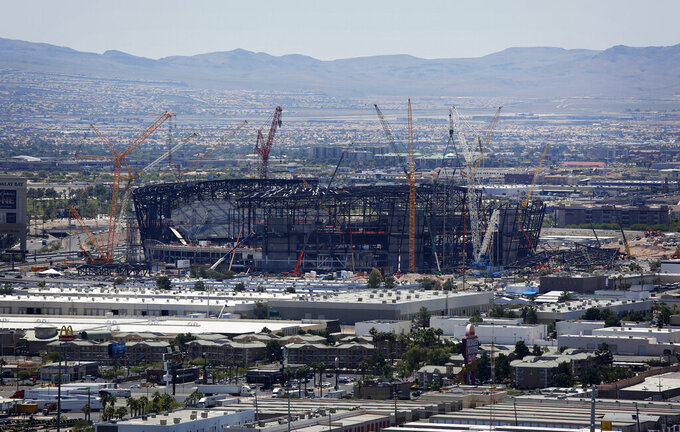 FILE - In this June 4, 2019, file photo, construction cranes surround the football stadium under construction in Las Vegas. The $1.9 billion stadium being built in Las Vegas for the relocated NFL Raiders team is being named for Allegiant Travel Co. Officials made the announcement Monday, Aug. 5, 2019, during a ceremony marking installation of the final steel beam for the roof of the 65,000-seat indoor stadium just off the Las Vegas Strip. (AP Photo/John Locher, File)

The players stayed at camp in California, but owner Mark Davis and other top Raiders executives were on hand for the ceremonial topping off of the team's new $1.9 billion stadium in Las Vegas. The AP's Barry Wilner talks about how the team might fare in its last season in Oakland, and prospects for the team in its new city next year.

Wilner tells PodcastOne Sports Now co-hosts Tim Dahlberg and Jim Litke that the Raiders may not be a playoff team this year, but are loaded with draft picks and should be finding their form by the time they open in Sin City for the 2020 season.

Also joining the podcast is Fox and Brooklyn Nets announcer Sarah Kustok, who talks about the buzz that recent free agency moves gave the NBA and about the future for the Nets with two big additions coming in. Kustok also advises listeners to tune in this week as Fox airs the Jr. NBA Global Championship, which shows off some of the NBA stars of the future.

And there's talk about food in Chicago restaurants and the return of chicken mole to one of the best Mexican joints in town.