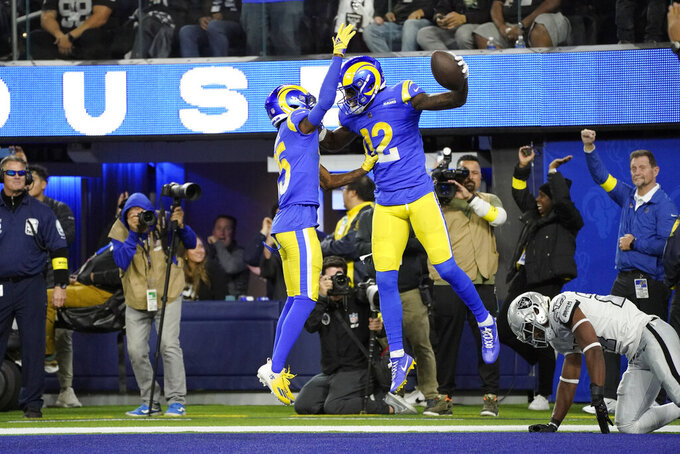 Now imagine what Baker Mayfield and Sean McVay can do with two practices together.

That's the prevailing thought around the Los Angeles Rams while they head into a highly enjoyable long weekend after their stunning, come-from-behind, last-minute 17-16 victory over the Las Vegas Raiders on Thursday night.

“That was a special night,” McVay said Friday. “Baker and the receivers making those plays, it sure was fun to watch them do their thing.”

Less than 48 hours after he arrived on the West Coast, Mayfield was throwing darts downfield and head-butting his new teammates in celebration after leading the Rams to their first win since Oct. 16.

His preparation time consisted of one light practice Wednesday with two 10-play periods behind center — and then Mayfield went into SoFi Stadium and took over the Rams' offense from the second series onward, eventually passing for 230 yards and leading two TD drives in the fourth quarter.

“Ball is ball,” Mayfield said afterward. “And when you have guys like that around you that put you in a good spot and they help you out, and those guys did it.”

Van Jefferson's 23-yard TD catch with 10 seconds to play considerably lightened the mood around the Rams (4-9), who ended a six-game skid and avoided matching their longest losing streak since coming home to LA. For at least another week, the 1999 Denver Broncos remain the only defending Super Bowl champion to lose 10 games.

The Rams have extra time to prepare for their visit to Green Bay next Monday night to begin the final stretch of a lost season that no longer seems so grim with Mayfield behind center. McVay confirmed he expects Mayfield to be his starting QB for the last four games.

“It feels really good right now, but there’s a lot to get fixed," Mayfield said.

That's for sure: Even with Mayfield pushing the ball downfield in a way neither John Wolford nor Bryce Perkins had been capable of doing in Matthew Stafford's absence, the Rams still didn't get into the end zone until the final 3:19 against the Raiders. McVay believes Mayfield can do even more once he understands more of the Rams' playbook following this elongated break.

“It will be good to just take a deep breath and unpack the game from last night, and give the coaches a little bit of time,” McVay said.

With their first-round pick next year belonging to Detroit, the Rams have no motivation to tank, obviously or indirectly. They'll try to win as many games as possible, including a New Year's Day showdown with their playoff-contending SoFi roommates, the Los Angeles Chargers.

The Rams' remaining healthy defensive regulars stepped up, particularly while LA allowed just 67 yards and two first downs in the second half. Bobby Wagner had another standout game with 14 tackles to bolster his All-Pro credentials. Jalen Ramsey gave up a couple of stunning receptions by Davante Adams, but the Raiders' star wideout didn't have a catch in the second half as Ramsey and Co. locked him down. LA didn't allow a touchdown after Vegas' opening drive.

Cam Akers and the Rams' offensive line both didn't contribute enough. Mayfield was sacked four times behind a line that committed a handful of costly penalties and didn't get much going for Akers, who averaged 3.5 yards per carry. Akers made back-to-back huge plays to end the Rams' penultimate scoring drive, but he also fumbled in the red zone in the first half.

Although Jefferson caught the game-winner, Ben Skowronek was the Rams' unlikely hero at receiver with career highs of seven catches for 89 yards, including a 32-yard grab in double coverage on the decisive drive. Skowronek has sometimes seemed to be in over his head when asked to play extensively on offense in the past two seasons, but the former seventh-round pick is improving.

Perkins has been on the Rams' 53-man roster for the past two seasons because McVay valued his potential and skill set, but it's now apparent McVay doesn't want his third-string QB to play ahead of a new waiver-wire acquisition, even one as talented as Mayfield. That's a waste of a roster spot that could have been used to bolster the Rams' depth.

3 — Offensive assistant coaches already reported to be leaving McVay's staff for other jobs. The Rams haven't confirmed the latest possible departures from a staff with ample turnover during McVay's tenure, but they also pointedly haven't denied them. McVay acknowledged he has discussed a possible return to Kentucky by offensive coordinator Liam Coen after one year back with the Rams, but he doesn't think Coen has finalized the move.

The Rams will have more plays in the package for Mayfield in Green Bay, and they'll be riding positive momentum for the first time in two months. That's about as good as it will get for LA late in this lost season.