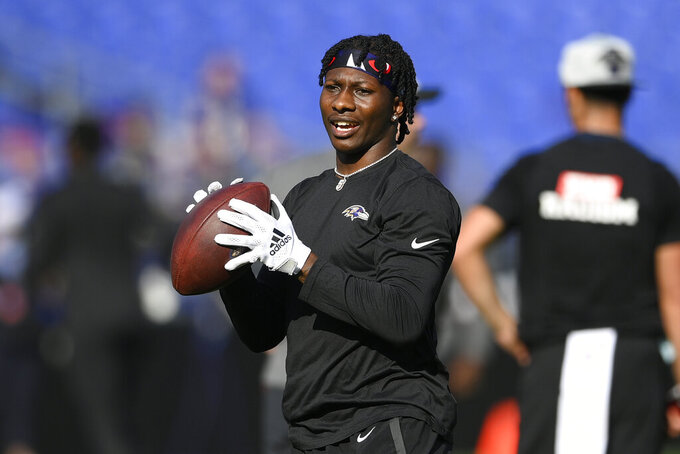 FILE - In this Aug. 14, 2021, file photo, Baltimore Ravens wide receiver Marquise Brown works out before an NFL preseason football game against the New Orleans Saints in Baltimore. Brown did not play in any of Baltimore's preseason games and just recently returned from a hamstring injury. (AP Photo/Nick Wass, File)

He can’t afford to dwell too much on the time he missed.

“Very frustrating,” he said. “I came into this camp feeling the best I have felt, and I was excited. I had a good start to camp, and then … it was frustrating, but everything happens for a reason.”

The Ravens are now preparing for their opener next Monday night at Las Vegas. Now entering his third season, Brown is Baltimore's top returning receiver — and although the Ravens tried to upgrade the position this offseason, injury problems limited the group during training camp.

First-round draft pick Rashod Bateman (groin) is still out, so Baltimore may lean on Brown as much as usual early in the season.

Not only did Brown miss time, but so did quarterback Lamar Jackson, who was out at the beginning of camp following a positive COVID-19 test. Unlike Bateman and newly acquired receiver Sammy Watkins, Brown has had a couple seasons to develop chemistry with Jackson. That could limit the effect of the time he's missed.

“When I got back out there, it was just like we picked up where we left off. Just being out there is definitely better than not being out there,” Brown said. "You can always gain more and more each day that you’re out there. So, that’s the goal is to always be at practice.”

Brown, a first-round draft pick in 2019, started 25 games over his first two seasons. He had 58 catches for 769 yards and eight touchdowns last season.

Brown's injury was hardly the biggest concern for the Ravens this preseason — running back J.K. Dobbins hurt his knee and was lost for the year. But Brown's ailment was a setback.

“You can’t get those days back, but he’s a really good football player,” coach John Harbaugh said. "He’s in good shape. I think our people have done a good job with the rehab, the conditioning and all that. He’s been in all the meetings. He knows what to do, so now he has to go out and do it.”

Brown said Monday he feels the injury is behind him.

“I stayed dialed in with my teammates. Just because I wasn’t out there, every rep they were taking I felt like I was taking," he said. "Every mistake or every good thing they did, I put myself in those shoes. So, when I got out here, I knew what to expect, I knew how to do stuff and I knew the standard that the room has been setting this whole camp.”

The Ravens ranked last in the NFL in passing last season, so Jackson and the receiving group will be under pressure to improve that — especially with the injury to Dobbins affecting the running game.

“There’s no shying away from competition in the room,” Brown said. "If someone makes a big play, the next person wants to make a big play. That’s how the competitiveness in the room is going to fuel everyone to make big plays out there.”

NOTES: Le'Veon Bell and Devonta Freeman are among the RBs who have had tryouts with the Ravens. ... Harbaugh said the team's vaccination rate is "still above 90%” and he thinks the Ravens won't have the type of interruption they went through last year, when a Thanksgiving game against Pittsburgh was pushed back into December.