Ravens report to camp with Ferguson on their minds 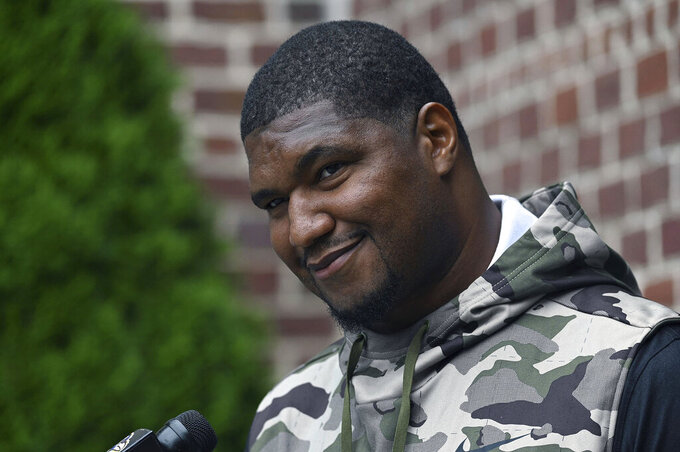 OWINGS MILLS, Md. (AP) — For the Baltimore Ravens, the start of training camp this year brings a certain amount of heartache.

Being back at the facility is another reminder of the tragedy that shook the organization last month.

Shortly after the end of minicamp, Ravens linebacker Jaylon Ferguson died at age 26. He remains on the minds of his teammates as they prepare for the preseason.

“Guys talk about him today,” defensive lineman Calais Campbell said. “You definitely have that sense of like, man, you lost a really good friend and a person that you cared about. It’s definitely still hard.”

Ferguson played all three of his NFL seasons with Baltimore. His death was part of a tragic June day for the Ravens that included news of Ferguson's passing and that of former Baltimore standout Tony Siragusa.

Now players are back. Tuesday was reporting day for veterans, and the first full-squad practice is set for Wednesday. It's a time for hope, excitement — and determination for the Ravens to rebound from a disappointing 2021 season. It was also a time to remember Ferguson.

“He was a good friend, and you miss him every day. You feel sorry for his family, and just his potential, what he could have been," Campbell said. "Just coming in for the first day, knowing that he would be here normally if he didn't pass away. You miss him.”

Campbell was upbeat at times when he spoke with reporters, but he also acknowledged the loss the team is dealing with.

“It’s been hard for all of us. After minicamp, when it happened, we had a call, and everybody had to say something if they wanted to,” Campbell said. “You couldn’t believe it when it happened.”

Campbell said he couldn't remember exactly what he shared on that call, but it was an emotional time.

“It's one of those things where you've just got to appreciate life, you never know when it's over,” Campbell said. “Every day is precious. ... It's going to be something that's hard to deal with the whole year. I think as a team, we're definitely going to do something for him, so that's the cool thing, but any time you lose a guy that you consider a brother, it's hard."

Linebacker Patrick Queen is from the same area of Louisiana as Ferguson.

“It’s tough. That was my guy. He grew up 25 minutes away from me, so definitely miss him,” Queen said. "We’re going to go out there and do it for him this year. Still send prayers to him and his family.”

Ferguson played at Louisiana Tech, where he set an FBS record for career sacks. He was drafted by the Ravens in 2019.

“A bunch of guys want to do something for him this year, for his family, and just showing our appreciation for his friendship,” Campbell said. “It’s heartbreaking. You just pray for his family and just try to make sure whatever we can do to help each other through the process, we try to do it as a group. It’s something that I’ll probably think about every day this season.”