Ravens' secondary gearing up for another clash with Mahomes 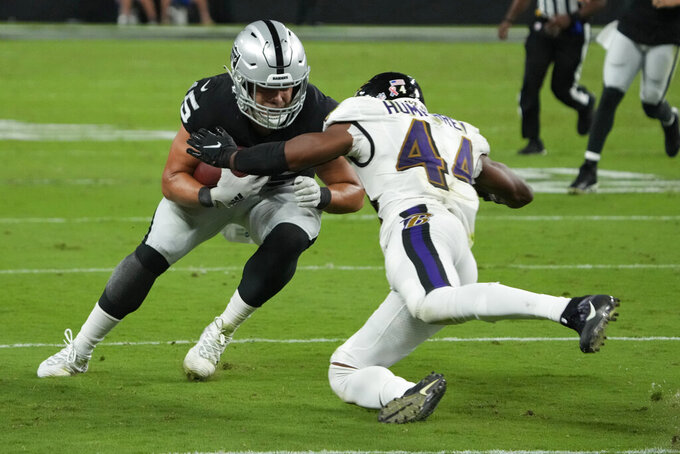 “The Chiefs have definitely had our number the past couple years," cornerback Marlon Humphrey said. "I guess the way you go about changing it is just addressing it, how it is, looking at it head on, and going into the game and just trying to beat them.”

For a half Monday night, the Ravens looked ready to face whatever Mahomes might throw at them, but then the Raiders rallied for a 33-27 overtime win. Las Vegas scored on four of its final five possessions.

The Ravens allowed 409 net yards passing, the most by a Baltimore opponent since 2017. That total was inflated a bit because the game went into overtime, but it was still concerning.

Since the start of the 2018 season, Baltimore is 35-14 in the regular season — but that mark includes an 0-3 record against the Chiefs. The 2018 matchup went to overtime, and the following year, the Ravens lost 33-28 after trailing by as many as 17 points.

Last season Baltimore lost 34-20. Mahomes has been remarkably consistent against the Ravens, throwing for 377, 374 and 385 yards in those three games.

"When it's like, ‘Oh the Chiefs made this crazy play.’ And they make so many big, crazy plays. But the biggest thing is you've got to tackle their skill and make the plays you're supposed to make.”

Humphrey issued a bit of a mea culpa when asked about possible late hits on Las Vegas receiver Hunter Renfrow.

“I did hit Hunter Renfrow a little after the play,” Humphrey said. “I thought Derek Carr was out of the pocket. I apologized to him on the field. Yeah, that was a play I wish I could take back.”

The Baltimore secondary is missing Marcus Peters, out for the season with a knee injury.

“That was huge. It kind of happened so fast, and we had to get on to Las Vegas," Humphrey said. "His play of course, we missed him there, but the thing I'm going to miss most about him is the things he does when we're not on the field — talking to me, talking to the guys, calming us down.”

Cornerback Jimmy Smith (ankle) missed Monday's game and was limited in practice Wednesday. Receiver Marquise Brown missed practice because of an ankle issue, although it's unclear if that's serious enough to put his status in any jeopardy for Sunday night's game. He caught six passes for 69 yards and a touchdown in the opener.

Mahomes is 11-0 as the starting quarterback in September, with 35 touchdown passes and no interceptions. And Kansas City can cause problems defensively too.

“They’re going to be very aggressive, they’re going to try to create the illusion of chaos," Ravens coach John Harbaugh said. "You’ve got to organize that and get it organized in your mind offensively and be ready to attack that.”