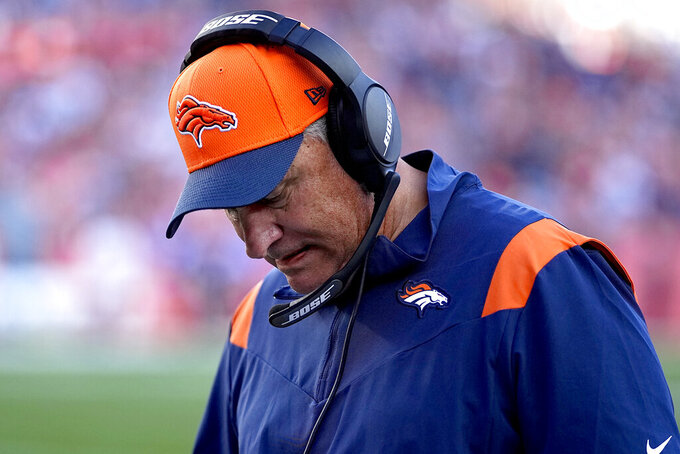 CLEVELAND (AP) — One starting quarterback is limping, the other has his arm in a sling. There are injuries up and down both rosters, and the two coaches are feeling some external pressure — one for the first time.

The Denver Broncos are banged up, reeling and desperate for a win. Ditto for the Cleveland Browns.

Two teams with a history of meeting in meaningful games — three AFC championships from 1986-90 — will square off Thursday night, a matchup in which the stakes feel a lot bigger than normal for October.

"It's huge,” Browns safety John Johnson III said. “This is like a pivotal point in the season.”

If sure seems that way for the Broncos (3-3) and Browns (3-3), both of whom come into the game with major injury issues, notably to Cleveland quarterback Baker Mayfield, who is out with a shoulder injury, and Denver's Teddy Bridgewater, dealing with foot and quadriceps issues.

The Browns have lost two straight under coach Kevin Stefanski for the first time, and won’t have Mayfield, who made 53 straight starts and hasn't missed a game with injury since 2013 at Texas Tech. Mayfield’s injury has affected his play and pushed Cleveland’s season to a precarious ledge.

Backup Case Keenum will make his first start since 2019. This is nothing new for the 33-year-old journeyman who came off the bench in Minnesota and spent a season with Denver, going 6-10.

“I’m built for this,” he said. “This is what I have done my whole career of not knowing if I am going to start up until game time to not knowing who is out there with me to introducing myself to players while I am calling a play type stuff. I’m excited.”

Keenum won’t have running backs Nick Chubb and Kareem Hunt, who are both out with calf injuries, and it’s not yet known if he’ll be protected by starting tackles Jack Conklin (knee) or Jedrick Wills Jr. (ankle).

The injuries, piled on the short week, have complicated things for Stefanski, whose suspect defense along with some head-scratching play calls have triggered scrutiny in Year 2. The Browns came into the season with sky-high expectations. They’re falling fast.

Bridgewater got hurt Sunday when guard Graham Glasgow stepped on him as he delivered a touchdown pass in a demoralizing 34-24 loss to Las Vegas, which rallied in the wake of the Jon Gruden mess.

Bridgewater is expected to play — he's listed as questionable — and he's hoping to avoid the beating he took from the Raiders, who hit him 17 times, sacked him five and forced him into throwing three interceptions.

The Broncos have lost three straight, erasing a 3-0 start and rattling the team's confidence.

“I’m sure it’s shaken a little bit," coach Vic Fangio said. “It’s hard not to be. We have to rally back.”

Broncos edge rusher Von Miller called his shots. With Cleveland's tackle situation in flux, Miller predicted he'd have a big game — and all but guaranteed a Denver win.

“I'm gonna have a great game,” he said. “I’m gonna go out there and play well, get a couple sacks.”

As for who the Browns might use to block him, Miller said with a laugh, “I’ll going to kill him and the other guy, too, on the other side.”

“We came to an agreement that he's just going to go out there and not rush the quarterback,” Keenum joked. “He's going to take a knee every time on third down, so I think we will be good.”

“That’s my guy,” Miller said. “I’ve definitely got to play better than Myles this week. Myles, he’s going to make a couple of plays, as well. He’s a beast.

“I keep in touch with him. That’s just how it is when you go to Texas A&M, Aggies take care of Aggies. We’ve got a lifelong brotherhood outside of the NFL. I’m a huge fan of Myles on and off the football field. I want to see him have all the success in the world for sure.”

Fangio was hired as Broncos head coach after the Bears' defense he coordinated had 36 takeaways in 2018. But in 38 games as Denver’s head coach, the Broncos have forced just 39 turnovers, six this season. That’s 16½ per year, much lower than any of his five predecessors averaged: Vance Joseph (22½), Gary Kubiak (25½), John Fox (23¼), Josh McDaniels (24) and Mike Shanahan (28).

One big reason for Denver’s dearth of takeaways is that Miller and Bradley Chubb have played just 21 games together out of a possible 54 since the Broncos drafted Chubb with the fifth overall pick in 2018. Chubb has played in just one game this year and is recovering from ankle surgery that will sideline him for another month.

“You lose a guy like Chubb, there’s no plugging and replacing a talent like his,” safety Justin Simmons said. “Not only his play, his energy, what he brings leadership-wise to the team and the defense.”

The Broncos allowed the Raiders to become the first team since at least 1991 to have seven pass plays gain at least 25 yards, according to Sportradar. That’s certainly not what GM George Paton had in mind when he made the Broncos’ defense the league’s highest paid.

“Surprising,” Broncos defensive coordinator Ed Donatell said. “It’s NFL football and sometimes you’re just off a little bit. We were off a little bit at the ball. You couldn’t believe in our guys more than we do. We have such mature men that are prideful and who want to do better for the team on the back end.

"That’s the emphasis for this week.”