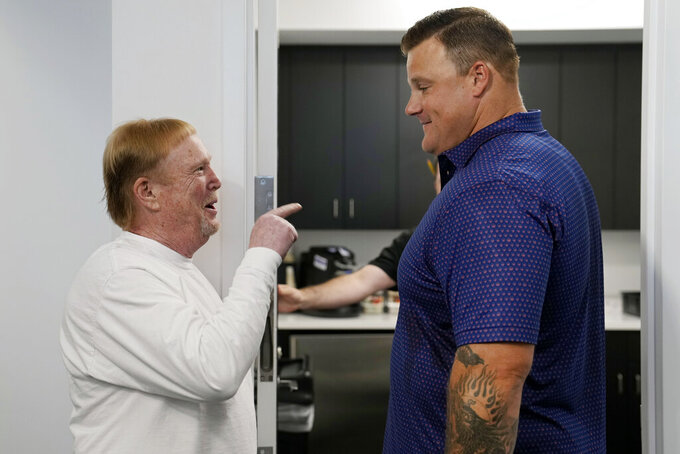 Incognito announced the decision Friday at the headquarters of the Las Vegas Raiders. The 39-year-old played his final three seasons with the Raiders. He also had two stints with the Buffalo Bills and spent time with the Miami Dolphins and St. Louis Rams.

While an outstanding lineman, Incognito pushed the boundaries of fair play and was fined numerous times for what was considered inappropriate play. He also was suspended by the Dolphins for misconduct against a teammate and some opponents alleged he made racial slurs.

“After stepping away from football in 2018, I knew if I came back, it’d be to finish out my career on my terms, it also had to be with the right team,” Incognito said during his farewell press conference. “It felt like home the minute I got here.”

Members of the team, including several offensive linemen, along with his agent, family members and team owner Mark Davis gave him a round of applause as he entered the room.

Incognito referenced the “bad boy image” he had acquired during his time in the NFL, which came with a lot of scrutiny in past organizations, but said Davis and the Raiders put their trust in what he could do on the field.

“He created such a fierce leadership mentality amongst these young guys, that he’s teaching them how to become football players and how to become Raiders,” Davis said. “That’s the thing about being a Raider, they’re badasses on the field, but they’re kittens off the field.”

The Raiders signed Incognito in May 2019 to a one-year deal. He started 14 games and earned his fourth Pro Bowl appearance as a reserve. After being extended to a two-year, $14 million contract at the end of the season, he appeared in only two games in 2020 before suffering an Achilles injury that kept him out the remainder of the season.

That contract was nullified in 2021 when he was cut from the team. The team eventually resigned him at a reduced rate for the 2021 season, but a calf injury sidelined him once again for the season.

“I’ve had a lot of setbacks, a lot of adversity,” Incognito said. “That’s probably what I’m most proud of, is coming back from those setbacks and that adversity. From each one of those setbacks along the way, just the learning and growing ... it’s that continued growth and continued improvement that I’ve learned the most about myself.”

Incognito has long been known as one of the most controversial figures in the sport after a series of inappropriate behavior dating to his days with the University of Nebraska.

A third-round pick by the Rams in 2005, Incognito emerged as one of the best at his position. He played in 164 NFL games.

Incognito wants fans to remember his work ethic and tenacity on the field.

The New Jersey native said he would love to get into coaching, especially if offered the chance to come back and work with the Raiders.

Until then, the Scottsdale, Arizona-resident plans on obtaining his MBA at Arizona State, while he continues to support and mentor the Raiders this season.

“I’m forever indebted to this organization for letting me come back and rewrite the ending,” Incognito said.