Rival Patriots, Bills to meet in playoffs for only 2nd time 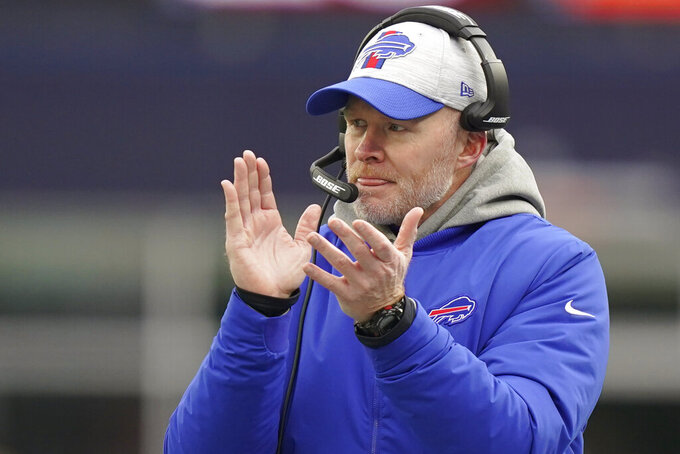 Buffalo Bills head coach Sean McDermott applauds toward his players during the first half of an NFL football game against the New England Patriots, Sunday, Dec. 26, 2021, in Foxborough, Mass. (AP Photo/Steven Senne)

BETTING LINE: Bills by 4, according to FanDuel Sportsbook.

TURNOVER DIFFERENTIAL: Patriots plus-7; Bills plus-8.

PATRIOTS PLAYER TO WATCH: RB Damien Harris. He led the Patriots with 929 rushing yards (10th in the NFL) and tied for second in the league with 15 rushing touchdowns, a total that is second in team history for a season. He’s rushed for 100 yards in each of the two games with Buffalo this season, with four touchdowns.

BILLS PLAYER TO WATCH: RB Devin Singletary. The Bills’ running attack has been revived since a 14-10 loss to New England on Dec. 6. In the five games since, Singletary has combined for 375 yards rushing and scored five touchdowns (including one receiving), providing Buffalo’s offense more balance.

KEY MATCHUP: Patriots CB J.C. Jackson vs. Bills WR Stefon Diggs. Diggs led the Bills with 103 catches for 1,225 yards and a career-best 10 TDs this season. He joins Tampa Bay’s Mike Evans as the only NFL player with 1,000 plus yards receiving and six or more TDs in each of the past four seasons. Diggs has 11 catches on 20 targets in the two matchups with New England. The task of slowing him down will fall mostly on Jackson, the team’s best one-on-one pass defender and ballhawk. Jackson leads the AFC with eight interceptions.

KEY INJURIES: Patriots CB Jalen Mills was placed on the reserve/COVID-19 list Tuesday and could be unavailable. LT Isaiah Wynn is listed as questionable after missing practices on Wednesday and Thursday with hip and ankle injuries. DL Christian Barmore is also a question mark after leaving the regular-season finale with an ankle injury and being limited all week. The Bills are injury-free, with WR Emmanuel Sanders set to return after missing two games with a knee injury.

SERIES NOTES: New England and Buffalo will meet for the third time this season after splitting the annual regular-season meetings, with each team winning on the road. This will be the second matchup between the teams in the postseason. The Patriots’ first playoff game was a 26-8 win over the Bills at Buffalo on Dec. 28, 1963. The Patriots are 38-23-1 overall at Buffalo, including a 31-17 at Highmark Stadium. The Patriots’ 77 wins over the Bills provide their highest victory total over any opponent, six higher than their next highest win total against the New York Jets (71).

STATS AND STUFF: The Patriots will play a division opponent in the playoffs for the seventh time in team history. They are 5-1 in the previous six games. … New England enters the playoffs as a wild-card team for the first time since the 1998 season. The Patriots have played in the wild-card round four times under Bill Belichick (2005, 2006, 2009 and 2019), but played in those games as the division winner. They are 2-2 in those games. … The Patriots have appeared in 48 playoff games since 1994, the most in the NFL. Green Bay is second with 36. … Belichick will extend his NFL record by coaching in his NFL-leading 44th postseason game. He also can add to his NFL-record 31 playoff wins. … QB Mac Jones led all rookies with 3,801 passing yards and 22 touchdowns this season. … Jackson leads the NFL in interceptions (25) since entering the league in 2018. … K Nick Folk finished tied for second in the NFL lead with 36 field goals and set a single-season career high. … LB Matt Judon leads the team with 12 1/2 sacks. … With a forecast temperature of zero at kickoff, the game has the chance to match the coldest in Bills history. The temperature was zero at kickoff in Buffalo’s 29-23 home win over the Los Angeles Raiders on Jan. 15, 1994. ... Buffalo clinched consecutive AFC East titles for the first time since a four-year run from 1988-91. ... The Bills' roster features 40 players who have appeared in at least one playoff game, and 38 players with multiple appearances. ... QB Josh Allen has a 2-2 playoff record and will make his fifth postseason start, the most among the five quarterbacks selected in the first round of the 2018 draft. Allen was selected seventh overall. Baltimore’s Lamar Jackson (selected 32nd) has made four postseason starts, Cleveland’s Baker Mayfield (No. 1) has two, while Atlanta’s Josh Rosen (No. 10), now on his third team, and Carolina’s Sam Darnold (No. 3), now on his second team, have yet to appear in the playoffs. ... Allen is 19-4 in the regular season and 2-0 in the playoffs when he doesn’t commit a turnover. Conversely, he’s 20-17 in the regular season and 0-2 in the postseason when committing a turnover. ... The Bills are 10-1 this season when scoring a TD rushing and 11-2 when topping 100 yards rushing. ... Buffalo is 8-0 when scoring a touchdown on its game-opening drive this season. ... Buffalo is the only team this season to rank in the top five in both total offense and defense. ... Buffalo is 1-6 when trailing at halftime, with the lone win coming against Atlanta two weeks ago. Buffalo trailed 15-14 at the half of an eventual 29-15 win. ... The Bills allowed a franchise-low four first downs and 53 net yards (second fewest in team history) against the Jets last weekend. ... In 11 wins, Buffalo’s defense allowed 135 points, forced 27 turnovers (nine fumbles, 18 interceptions) and generated 36 sacks, including nine against the Jets. In six losses, Buffalo has allowed 154 points, forced three turnovers (two fumbles and an interception) and generated six sacks. ... Safeties Jordan Poyer and Micah Hyde each tied career highs with five interceptions, and were the NFL’s only tandem with five or more each this season.