Runner-up: Chubb focused on Titans, not lost title to Henry 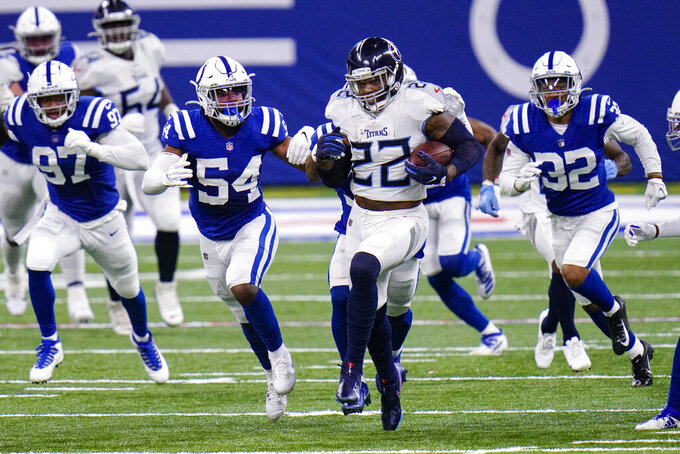 "I think it bothers everybody else besides Nick Chubb, just to be quite honest,” quarterback Baker Mayfield said this week.

Chubb won't dethrone Henry this season after missing four games with a sprained right knee. But he'll get a chance to showcase his skills in a matchup with the Titans' titan on Sunday as the Browns (8-3) play a game that will serve as a good measuring stick for a Cleveland team lacking quality wins.

Chubb, in his reserved, no-frills-just-play-ball nature, said being second to Henry was somewhat irritating but nothing that lingers.

“A little bit, but it is nothing personal against him," he said. "It is more of just myself. I am not mad at Derrick Henry for getting the rushing title last year.”

Chubb's teammates, on the other hand, haven't quite gotten over it.

"I was just crushed for him because I just know how hard Nick works, how hard he runs and the type of guy he is and more for him as a person,” left guard Joel Bitonio said, recalling he was seated next to Chubb on the team's flight from Cincinnati when he learned Henry passed his teammate. “The difference was what, 50 yards or something like that?

"An NFL rushing title and things of that nature are things that you can look back on in 10, 15 or 20 years and tell your grandkids you led the NFL in rushing. It was tough.”

The Browns, with a strong tradition rooted at running back, haven't had a player lead the league since Hall of Famer Leroy Kelly in 1968.

Chubb was positioned to win the crown last season. He led Henry with two games left, but only picked up 86 yards in his last two games and finished with 1,494.

Henry, who sat out Week 16 with a nagging hamstring injury, went into the finale with 1,329 yards and broke free for 211 against Houston. Henry's 1,540 made him the rushing king, and this week he stood by his story that he didn't know how much he needed to overtake Chubb.

“I was focused on what we needed to do,” he said.

Chubb and Henry have similar running styles with some subtle differences.

“We do not do a lot of dancing. Just kind of north-to-south guys,” Chubb said.

Both have the ability to turn a short gain into a long touchdown with a stiff arm or broken tackle. Chubb may be a little shiftier, while Henry is more of a punishing runner.

Neither is super fast, but it's rare for either Chubb or Henry to get caught from behind. There's speed, and then there's game speed.

“Sometimes we get wrapped up in that 40 (yard dash) time from Indianapolis," Browns coach Kevin Stefanski said, referencing one of the rookie standards at the NFL combine. "When you have a guy like Nick, when you have a guy like Derrick Henry, they play very fast, faster than I’m sure whatever their times are.

“When you play in the fourth quarter and teams have been tackling those guys the whole game, it obviously takes its toll on the defenders as well.”

“Both those guys are excellent,” Vrabel said. “Vision, strength, lower-body strength, they break tackles. They stretch, cut, they have the ability to get the edge. Sitting there watching them, you forget sometimes that you have to find ways to stop them because you kind of like the way they play and the way that these guys are blocking for them in front.”

Jack Conklin has blocked for them both.

After four seasons in Tennessee, Conklin signed as a free agent with Cleveland in March. He helped open holes for Henry and is now doing the same for Chubb, who enters Sunday's game with 719 yards — and a robust 6.3 yards per carry average.

Conklin didn't need long to appreciate Chubb's persona on and off the field.

“He's not a vain guy in the way about how he goes to work,” Conklin said. “He wants to be the best, but he is not going to go talk about it and talk about his stats or anything like that. He is the exact teammate you would want on any team and the type of person you would want to be around every day.”