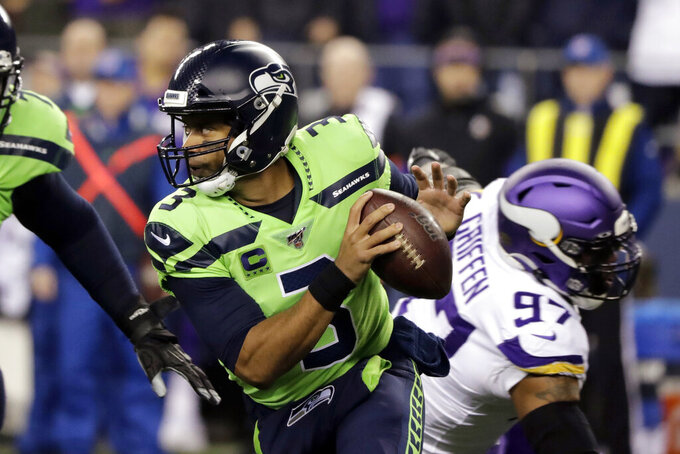 RENTON, Wash. (AP) — When it comes to the foundation of what Pete Carroll wants from his offense, it’s always based around the run.

It was that way in college when he was winning titles at Southern California. It’s been that way during his 10 seasons at the helm of the Seattle Seahawks.

But even in the days of Marshawn Lynch carrying the load, the Seahawks have rarely had the one-two run game punch they showed in Monday night’s 37-30 win over the Minnesota Vikings. From the time Seattle selected Rashaad Penny in the first round of the 2018 draft, Carroll has talked about the opportunity of Penny and Chris Carson combining to be a forceful backfield duo for the Seahawks.

Against one of the best run defenses in the NFL, it finally popped as Seattle (10-2) moved into first place in the NFC West.

Carson rushed for 102 yards. Penny added another 74. Both rushed for touchdowns and Seattle rolled up 218 yards rushing against a defense giving up less than 100 per game. It was the third time in Carroll’s tenure — and first since 2012 — the Seahawks had two running backs rush for at least 74 yards in the same game.

The growth of Seattle’s run game in recent weeks has been an important development and taken some of the offensive weight off quarterback Russell Wilson. Wilson hasn’t been great the past few weeks, but Seattle’s offense hasn’t faltered because of the run game.

In the past four games, Seattle rushed for 145 yards against Tampa Bay when it was ranked No. 1 in the league against the run; 147 vs. San Francisco; 174 vs. Philadelphia and capped the stretch with its performance against Minnesota.

It’s not the “Legion of Boom” and shouldn’t be compared to that group. That being said, Seattle’s secondary is playing very well. Take away a blown coverage that led to a 58-yard touchdown and Seattle didn’t allow a catch of longer than 19 yards by a Minnesota wide receiver or tight end. Stefon Diggs was held to four catches for 25 yards. Seattle cornerback Tre Flowers had a game-changing interception on the first play of the fourth quarter that allowed the Seahawks to take a 34-17 lead. Quarterbacks have a combined 75.7 passer rating against Seattle over the past three games.

The Seahawks could be better at closing out games in the fourth quarter. Ten of Seattle’s 12 games this season have been decided by one score and Monday was another time the Seahawks let a late lead start to slip away. Seattle had a 17-point lead with 13:30 remaining and watched Minnesota pull within 34-30 in the closing minutes. Seattle has just one win by more than eight points.

Seattle had to get a big game from its offensive line to have success running against Minnesota’s defense. But on top of the running yards, the Seahawks line was not penalized in the victory. The clean performance up front kept Seattle out of challenging down-and-distance situations and helped lead the Seahawks holding the ball for nearly 40 minutes.

Rookie wide receiver DK Metcalf led Seattle with six receptions for 75 yards. It was a nearly flawless night by the rookie until he fumbled early in the fourth quarter deep in Minnesota territory with the Seahawks trying to put away the Vikings. It was his third fumble in the past six games.

Seattle came out of the victory relatively healthy with one lingering concern regarding the shoulder of defensive end Ziggy Ansah. It’s the same shoulder Ansah had surgery on last offseason and he seemed to aggravate it on a big hit in the closing minutes. Carroll said on his radio show on Tuesday morning that the shoulder, “is a problem,” and the team will have to see how he does moving forward.

Wide receiver Tyler Lockett went without a catch and was one of a handful of players that had been sick with the flu last week, but he should be fine this week, Carroll said.

8 — With a win, the Seahawks will clinch their eighth playoff berth in Carroll’s 10 seasons in charge. Between 1976 and 2009, the Seahawks had 10 total postseason appearances.

The Seahawks face the Los Angeles Rams in primetime on a short week this Sunday. Seattle has lost four of its past five road visits against the Rams and is 1-2 since the team moved back to Los Angeles. It could also be Carroll’s final trip to the Coliseum where he led USC prior to joining the Seahawks in 2010.