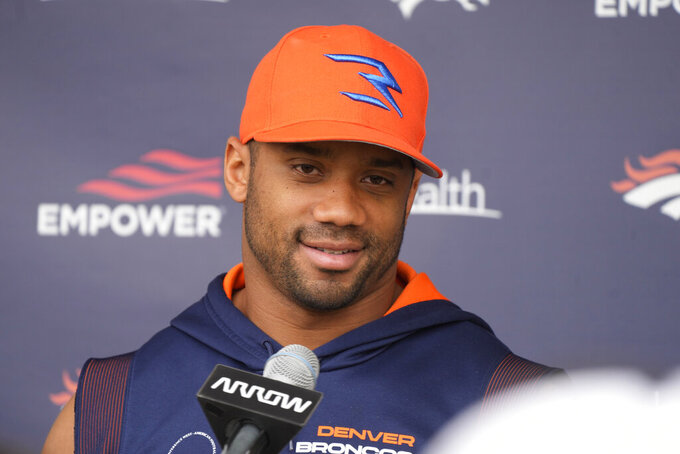 OPENING LINE: 49ers by 1, according to FanDuel SportsBook.

TURNOVER DIFFERENTIAL: 49ers plus-2, Broncos minus-2.

49ERS PLAYER TO WATCH: QB Jimmy Garoppolo. After losing his starting job to Trey Lance, Garoppolo is back in control of the Niners offense after Lance went down with a season-ending ankle injury last week. San Francisco has a 31-14 record when Garoppolo starts even if his production isn’t overwhelming. After barely practicing with the team all year, Garoppolo went 13 for 21 for 154 yards and a TD after replacing Lance last week.

BRONCOS PLAYER TO WATCH: QB Russell Wilson. He's off to a slow start in Denver, where he's thrown for just two touchdowns and has come up empty all six times he's driven the Broncos inside the 20-yard line. Coach Nathaniel Hackett blames his own dawdling as an unpolished play-caller for Wilson’s slow start and vowed to make decisions faster and get play calls in quicker. Wilson has run just three times for 5 yards so far.

KEY INJURIES: San Francisco is hoping to get TE George Kittle back after he missed the first two games with a groin injury. ... RB Ty Davis-Price is out with a high ankle sprain after starter Elijah Mitchell went down with a knee injury in the opener. ... Backup TE Tyler Kroft (knee) also is out this week. The Broncos are hoping to get WR Jerry Jeudy (rib) and CB Patrick Surtain II (left shoulder) back after both got hurt last week. ... Returning to practice this week were ILB Josey Jewell (calf) and RT Billy Turner, who missed most of the offseason program and the first two weeks following knee surgery.

SERIES NOTES: The biggest game between these teams came in Super Bowl 24 when the 49ers demolished the Broncos 55-10. The 49ers' 26-23 win in overtime on New Year's Eve in 2006 kept Denver out of the playoffs. In their previous meeting, Kittle had seven catches for 210 yards by halftime and Shanahan apologized after the game for not feeding him the ball at all in the second half.

STATS AND STUFF: The 82 rushes the first two weeks for the Niners are the second most through two games in the NFL in the past 10 seasons and the most for San Francisco since 1974. ... The 49ers became the second team in the past 14 seasons to allow fewer than 220 yards in each of the first two games of the season. Carolina also did it in 2017. ... The Niners lead the NFL with average time of possession of 35:54 per game. ... San Francisco is allowing a league-low 2.67 yards per carry on first down. ... San Francisco TE Ross Dwelley caught a TD pass and recovered a fumbled punt last week. ... Niners DE Nick Bosa had two sacks and five QB hits last week. He has three sacks this season. ... San Francisco RB Jeff Wilson Jr. 18 carries for 84 yards and two receptions for 19 yards last week. In nine career starts, Wilson is averaging 81.5 yards rushing per game. ... QB Russell Wilson is 16-4 in his career against San Francisco, including 8-2 against Shanahan. ... Wilson has dominated the Niners of late, winning four straight with a combined 12 TD passes and one interception. ... RB Javonte Williams had 75 rushing yards last week. ... RB Melvin Gordon had 104 rushing hards and 55 receiving yards with a TD in his only career game against San Francisco in 2018. ... WR Courtland Sutton had his fifth career 100-yard game last week when he caught seven passes for 122 yards. ... TE Eric Saubert had his second career TD catch against the Texans. ... OLB Randy Gregory had a strip sack last week and is joined by the Jaguars' Josh Allen as the only players to have forced a fumble in both Weeks 1 and 2 this season. ... LB Alex Singleton had five tackles and a career-best two pass breakups last week. ... DE Dre'Mont Jones is coming off his third career two-sack game and one was a strip sack.

FANTASY TIP: Broncos WR Courtland Sutton is coming off a seven-catch, 122-yard performance against the Texans, and Wilson leaned on him heavily after Jeudy got hurt. He targeted Sutton 11 times and the next most was Williams with four targets.