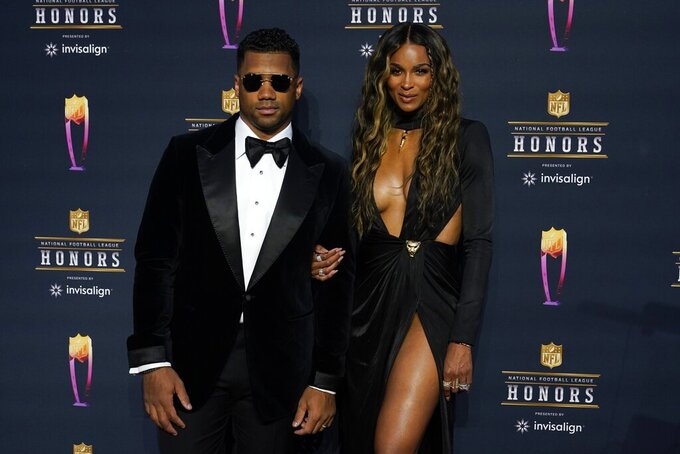 The award honors the NFL player who best exemplifies outstanding character and leadership in the home, on the field, and in the community. It’s named for Starr, the Green Bay Packers Hall of Fame quarterback who was MVP of the first two Super Bowls.

“It’s been a joy to build something special that’s meaningful for other people,” Wilson said.

“Every time we go to Seattle Children’s Hospital, we pray for a miracle,” Wilson said.

Despite speculation surrounding his future with the Seahawks, the nine-time Pro Bowl quarterback said he loves being in Seattle.

“I’m focused on what I’m doing and that’s preparing to win for the Seattle Seahawks,” Wilson told the AP Pro Football Podcast.

Titans quarterback Ryan Tannehill has taken plenty of criticism for Tennessee’s 19-16 loss to Cincinnati in the AFC divisional round. Tannehill threw three interceptions in that game as the No. 1 seed Titans were eliminated.

Star running back Derrick Henry has Tannehill’s back.

“It’s not a one-man sport. We all take part in how we played as a team. It’s not just him,” Henry told the AP Pro Football Podcast. “I could’ve played better and I’m sure a lot of guys think they could’ve played better, and there’s a lot of things we could’ve done differently. Ryan is a great player. He never gets too down on himself. He stays in the middle and takes everything for what it is. We all support him, people in the organization support him, and all you can do is come back better and let it fuel you and not get down. I’m sure Ryan isn’t down. He’s ready to attack and get ready for next season.”

Don’t tell Steelers edge rusher T.J. Watt, the 2021 AP Defensive Player of the Year, the team has to rebuild now that Ben Roethlisberger has retired.

The Steelers finished 9-7-1 and earned a wild-card berth when the Raiders beat the Chargers in overtime in the final game of the regular season. But Pittsburgh lost 42-21 to Kansas City in the first round.

“I don’t know if we’ll ever be rebuilding. That’s never my intention. That’s never the way I look at things,” Watt said on the AP Pro Football Podcast. “I think we have more than enough talent on this roster. We have great coaches to be able to win a lot of games. Every year, you’re just trying to get into the playoffs and anything can happen. I’m going to do everything in my power to take care of the defensive side of the ball and go into my sixth year trying to step up in a leadership role.”

Acho is part of International Justice Mission’s “Team Freedom,” which consists of more than 100 pro athlete families across multiple major sports. Team Freedom players are committed to using the global power and influence of sports in IJM’s work to protect people in poverty from human trafficking, slavery and other forms of violence.

It brings Team Freedom families and their supporters together across teams, leagues and sports to leverage their voices, platforms and resources to partner with IJM to combat online sexual exploitation of children. The goal is to create a world where children are free to play, free to dream, free to live safely without fear of abuse or exploitation.

“There are so many athletes who care about this work,” Acho told the AP Pro Football Podcast. “The cool thing is the work works. I went to the headquarters of IJM and met the heroes behind the scenes. I went into the field.”