Russell Wilson will start for Broncos against Jags in London 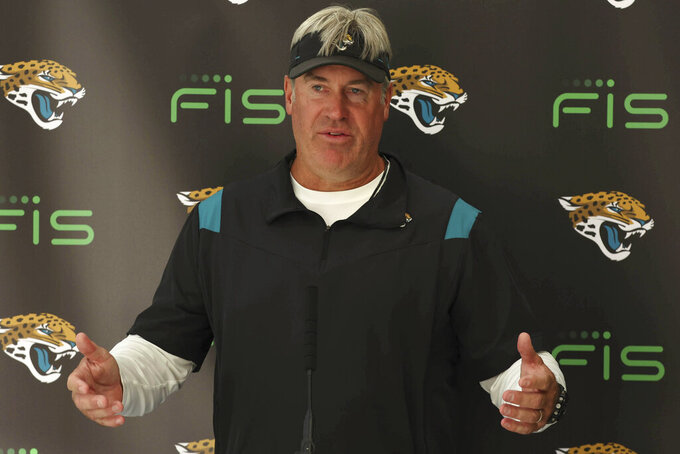 Jacksonville Jaguars head coach Doug Pederson speaks during a press conference after a practice session at The Grove in Watford near London, Friday, Oct. 28, 2022. The Jacksonville Jaguars will take on the Denver Broncos in an NFL regular season game on Sunday at Wembley Stadium in London. (AP Photo/Ian Walton)

Wilson was held out of last Sunday’s 16-9 loss to the New York Jets because of a strained hamstring.

Wilson was listed as a full participant in practice at the Harrow School outside London after being limited the prior two days.

Brett Rypien filled in for Wilson last week and threw for 225 yards and one interception as the Broncos lost their fourth straight game.

Wilson said this week that he could have played against the Jets.

“Russell is always going to think he can go, that's what you love about the guy,” Hackett said. "For us we wanted to be sure we gave him time — time to be able to get his mind right, his body right, everything. Being out here watching him throw, watching him move in the pocket, you felt a lot more comfortable than last week.”

Wilson is off to the worst start of his 11-year career, completing 58.6% of his passes with five touchdowns and three interceptions. He has missed just four games as a pro. On Wednesday, he said he was “ready to roll” on Sunday.

With a bye week upcoming, Hackett said he considered resting Wilson again but opted against it.

“In the end, if he can go, we want him to be able to play,” the first-year coach said.

“I would expect that he’s pretty close to 100% if he takes the field, and that’s something that our defense has got to be prepared for, and they’ve got to understand that when certain things break down, he’s going to take off and run,” Pederson told reporters at the team hotel after the Jags arrived Friday morning.

Hackett got a vote of confidence Thursday from Broncos general manager George Paton and noted the energetic vibe Friday as owners Rob Walton and Carrie Walton Penner looked on.

“The guys are fired up to get out there and have another opportunity,” Hackett said. “We’ve been so close for so many games.”

NOTES: Friday is the 15th anniversary of the first London game in 2007, when the New York Giants beat the Miami Dolphins 13-10 at a muddy Wembley Stadium. Eli Manning completed just 8 of 22 passes for a mere 59 yards but Brandon Jacobs rushed for 131 yards in the victory.