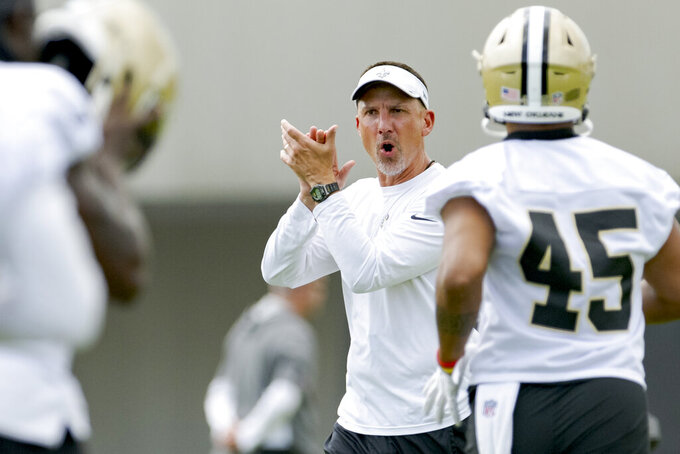 LAST YEAR: New Orleans won five of seven games Jameis Winston started before his first season as Drew Brees' successor ended with a knee injury. The Saints lost their next four games before rallying back into contention when Taysom Hill returned from his own injury and took over at QB. The Saints remained in contention until the last day of the season, when they were eliminated by San Francisco’s dramatic comeback at the Los Angeles Rams. The winning record came despite having four starting QBs and despite top receiver Michael Thomas (ankle) missing the whole season. Long-time coach Sean Payton retired after the season and was replaced by defensive coordinator Dennis Allen, whose unit performed well during the past half decade and was the clear strength of the team the past two seasons.

CAMP NEEDS: Alvin Kamara’s arrest during Pro Bowl weekend in Las Vegas raises the prospect of a suspension and a need for the Saints to establish a running back rotation that accounts for Kamara’s absence to start the season. Veterans Mark Ingram and Dwayne Washington, third-year pro Tony Jones Jr. and undrafted rookie Abram Smith will be competing for snaps at that position. After losing Armstead in free agency, the Saints are hoping to fill that spot with first-rounder Penning. The Saints also want to see further evidence that Winston will be fully healed from reconstructive knee surgery by the start of the season. Newly acquired veteran Andy Dalton and second-year pro Ian Book will open camp taking backup snaps. Allen has said Hill will continue in his periodic role as a running QB, but is expected to transition primarily to tight end. Defensively, the Saints are hoping former LSU star and nine-year NFL veteran Mathieu has enough left in his tank to be a difference-maker and is a good fit for Allen’s scheme. It also remains to be seen how defensive ends Payton Turner (shoulder) and Marcus Davenport (shoulder/hand) come back from injuries.

KEY CAMP COMPETITIONS: The Saints’ top three receivers could be players who did not play for New Orleans last season. Thomas aims to return from injury and join free-agent addition Jarvis Landry and draftee Olave. But returning veteran Tre’Quan Smith will be competing for first-team snaps there as well, while Deonte Harty (formerly Harris) is trying to carve out a greater role as a receiver to go with the All-Pro credentials he established as a returner during his rookie season in 2019. While the Saints want Penning to win the left tackle job as a rookie, he’ll be challenged by veteran James Hurst, who started eight games at left tackle when Armstead was hurt last season.

EXPECTATIONS: The Saints nearly made the playoffs last season despite a rash of injuries at key positions and return with a roster that is perhaps stronger and deeper than it was a year ago, particularly at receiver. But New Orleans also will be relying on 30-something veterans Cameron Jordan and Demario Davis to anchor their defense. If those players and Mathieu, who was let go by Kansas City, show signs of decline, that could hurt the Saints’ chances of being a playoff dark horse. Another pivotal factor will be how the roster responds to having Allen take over for Payton, who'd been the Saints' head coach since 2006. Allen is no stranger to returning players, however. He served as Saints defensive coordinator from the latter part of 2015 through last season and has brought back most prominent assistants from Payton's staff.