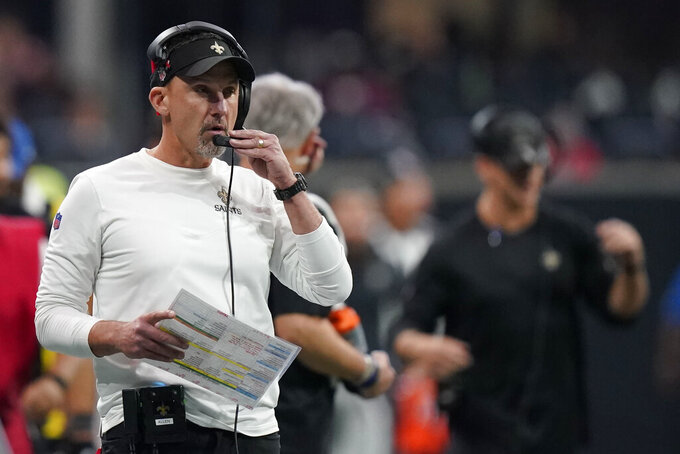 New Orleans Saints head coach Dennis Allen speaks during the first half of an NFL football game between the Atlanta Falcons and the New Orleans Saints, Sunday, Sept. 11, 2022, in Atlanta. (AP Photo/Brynn Anderson)

NEW ORLEANS (AP) — New Orleans Saints coach Dennis Allen was both gratified and concerned that his first game in his new job was rescued by the largest fourth-quarter comeback in the franchise's 56-year history.

“There’s a ton of stuff that needs to be corrected,” Allen said Monday after reviewing video of Sunday's 27-26 victory at Atlanta. “But I’ll say this: It’s been my experience over the last however many years, you get into games like this, and the good teams are able to win these games when they're not playing at their best.”

The Saints trailed 26-10 early in the fourth quarter before scoring the next 17 points, the last coming when Wil Lutz, who'd clanked an earlier field-goal attempt off the left upright, hit a 51-yarder with 19 seconds left.

But because of star cornerback Marshon Lattimore's personal foul for a hit after the whistle on the game's penultimate play, the victory wasn't sealed until New Orleans defensive end Payton Turner blocked Younghoe Koo's 63-yard field-goal attempt as time expired.

Lattimore's penalty was his second in the final minutes — the other being a third-down defensive holding call that allowed Atlanta, which led 26-24 at the time, to run the clock down further before punting the ball back to the Saints with 48 seconds to go.

"We did a lot of things in that game that could have kept us from winning," Allen said.

In the locker at team headquarters Monday, Allen's sentiments were echoed by linebacker Pete Werner.

“We’re fortunate for the win, but as a defense, and feeling vibe from the players and coaches, we can’t have a performance like that again or it’s not going to end with a ‘W’ in our minds,” Werner said.

Allen, who'd been New Orleans' defensive coordinator since late in the 2015 season before his promotion to head coach following Sean Payton's retirement, was bothered by the fact that Atlanta rushed for 201 yards.

“It’s unacceptable,” said Allen, whose defense ranked fourth in the NFL against the run last season. “That’s not been the standard that we’ve had around here and won’t be the standard we’ll have around here.”

Quarterback Jameis Winston, playing in his first game since tearing his left ACL last Halloween, struggled with the timing and accuracy of his passes for much of the first three quarters before he suddenly started hitting receivers downfield with apparent ease in the fourth quarter.

“We got into a little bit of a two-minute type of operation,” Allen said. "I thought Jameis felt real comfortable in that situation. ... Once Jameis got into a rhythm, we felt good about what he was doing.”

Quarterback runs designed for utility player Taysom Hill. Now listed as a tight end on the roster, Hill still takes snaps at quarterback periodically and usually keeps the ball when he does. At Atlanta, Hill gained 57 yards on one such run, setting up his 11-yard touchdown on a similar play.

The offensive line is expected to be a strength this season, but struggled for most of the first three quarters. The Saints allowed four sacks of Winston, who also released a number of rushed and inaccurate throws under pressure. That played a part in New Orleans converting just four of 13 third downs.

“We had a couple of miscues,” Allen said. “I don’t think we were as clean as we needed to be early in the game, particularly in the first half.”

Receiver Michael Thomas proved what a difference he could make in his first game since Jan. 17, 2021. His two touchdown catches in the final 12 minutes helped spearhead the comeback.

Right guard Cesar Ruiz and left tackle James Hurst each either missed blocks or struggled to hold blocks when the Falcons sacked Winston.

The Saints appeared to get through the game without any major injuries. Running back Alvin Kamara went to the locker room early with what Allen described as a minor rib injury. Winston also was briefly checked on the sideline between possessions early in the fourth quarter — right before he returned for the first of New Orleans' final three scoring drives.

212: The combined yards receiving of Jarvis Landry (114), Thomas (57) and Chris Olave — none of whom played a down for the Saints last season. While Thomas was coming back from injury, Landry was acquired in free agency and Olave was the club's top draft choice last spring. Olave also caught a 2-point conversion.

The Saints this Sunday play their home opener, in which they'll aim for a fifth straight regular-season victory over Tampa Bay since Tom Brady became the Buccaneers' quarterback in 2020.