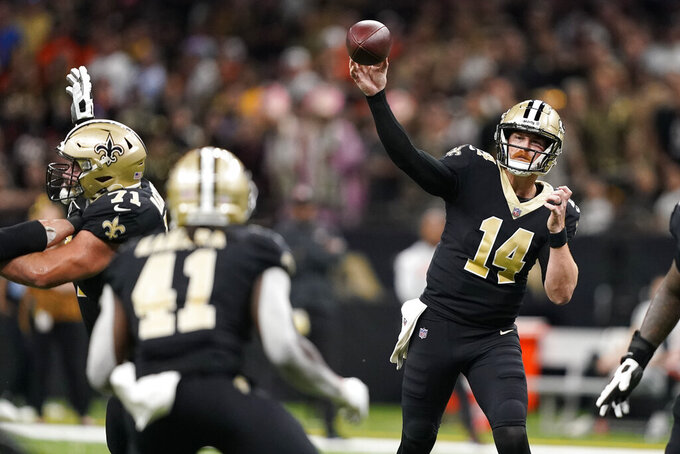 New Orleans Saints quarterback Andy Dalton (14) throws a pass to Alvin Kamara (41) during the second half of an NFL football game against the Cincinnati Bengals in New Orleans, Sunday, Oct. 16, 2022. (AP Photo/Gerald Herbert)

NEW ORLEANS (AP) — Receivers Michael Thomas and Rashod Bateman could have been two of the marquee performers in Monday night’s matchup between the Baltimore Ravens and New Orleans Saints.

Instead, both were placed on injured reserve this week, leaving their teams to figure out how to move on without them for the rest of this season.

The Saints (3-5) have had a bit of a head start on that front. They've played their past five games without Thomas since he went out with his foot injury, going 2-3 in that span.

New Orleans also has put up some of the better yards and scoring per game averages in the NFL, ranking in the top 10 in both categories.

So, one on hand, the Saints have proved they can move the ball and score without Thomas.

On the other hand, standout rookie receiver Chris Olave stressed, “it's Mike Thomas, though.”

“He's one of the best players when he's on the field and one of the best receivers I've seen,” Olave continued. "We've been trying to get more and more consistent and comfortable without him. Of course, we've got to do that moving forward, but it's always going to be tough playing without him.”

Olave could become a big part of the solution. The first-round draft choice out of Ohio State leads New Orleans with 37 catches for 547 yards and two touchdowns in seven games (having missed one because of a concussion).

New Orleans also is hoping it won't be long before the return of veteran Jarvis Landry, who has missed four games with an ankle injury and was listed as questionable on Saturday. Landry had seven catches for 114 yards in his Saints debut, playing a crucial role in the Week 1 comeback victory at Atlanta.

Versatile running back Alvin Kamara has been an increasingly frequent target of Saints quarterback Andy Dalton. He had nine catches for 96 yards and two TDs in a Week 8 victory over Las Vegas.

Kamara said he was less concerned about how the Saints would move on without Thomas than what he sees as unfair criticism of Thomas' health.

“It irks my soul to see that because nobody's in here like, ‘Let me get injured and not play and just get paid,’” Kamara said. “There's certain things you've got to be smart about. He's not going to ruin the rest of his career for right now.”

Thomas’ impeding surgery means he’ll have missed most of three seasons since his five-year, $96 million extension went into effect in 2020.

After Thomas missed more than half of 2020 and all of 2021 because of an ankle injury, the Saints had hoped he'd return to his All-Pro form of 2019, when he set an NFL record for catches in a season with 149 and had 1,725 yards and nine TDs receiving.

Instead, Thomas played in just three games this season, catching 16 passes for 171 yards and three touchdowns.

The Ravens drafted Bateman in the first round last year, but a groin injury hampered his rookie season.

Still, he caught 46 passes for 515 yards in 12 games, giving Baltimore confidence he could fill the void created by trading away receiver Marquise Brown.

Bateman's 55- and 75-yard touchdowns in the first two games validated the Ravens' belief in him, but his foot injury limited him to 13 snaps in last Thursday’s win at Tampa Bay. This past week, Bateman, like Thomas, agreed to undergo surgery.

The Ravens haven’t had much success throwing deep this season. They have only five pass plays of at least 30 yards, and Bateman caught three of those.

But Roman was hopeful other players will take advantage of more playing time.

“It’s all about the opportunity,” Roman said. “Don’t think for a second that these guys won’t step up and take advantage of that opportunity that’s in front of them.”

Rookie tight end Isaiah Likely is a case in point. He caught six passes for 77 yards and a touchdown last week at Tampa Bay.

On the opposite end of his career is veteran receiver DeSean Jackson. The Ravens signed him last month with the hope he has some clutch catches left in him. He could be active on Monday night.