Saints' renewed focus on fundamentals appeared to pay off 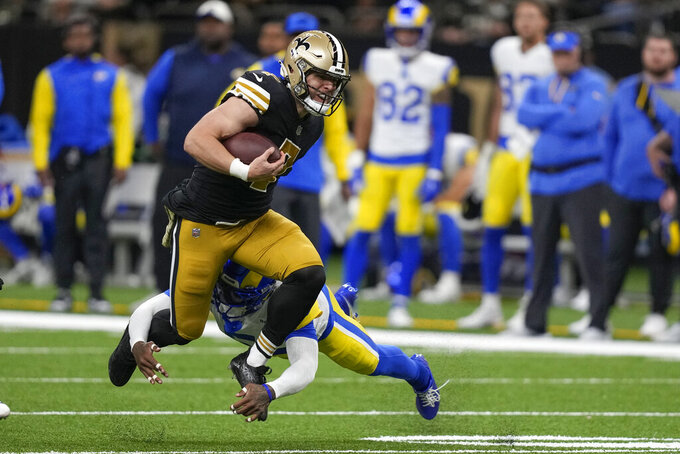 NEW ORLEANS (AP) — Saints coach Dennis Allen placed a renewed focus on fundamentals during the past week of practice and it appeared to pay off.

New Orleans did not turn the ball over, didn't have many missed tackles and was called for just two penalties during a 27-20 victory over the Los Angeles Rams on Sunday that kept the Saints within 1 1/2 games of first place in the NFC South, where no team has a winning record.

“Our tackling was really good," Allen said Monday after reviewing game video. "Our fundamentals on both sides of the ball were pretty good.

“A lot of times, penalties are a result of utilizing poor fundamentals or technique and then you get caught in a bad position,” Allen noted.

Playing with a patchwork offensive line that was missing three starters, the Saints prevented Rams star defensive lineman Aaron Donald from getting a sack or otherwise making a game-changing play.

Right tackle Ryan Ramczyk, who along with right guard Cesar Ruiz were the only regular starting offensive linemen to play in the game, said New Orleans' success likely stemmed in part from a “shared sense of urgency” that has players holding one another accountable.

With six games to play, the Saints have a decreasing margin for error if they want to catch first-place Tampa Bay (5-5).

“There’s no time for mishaps, miscommunication, any of that stuff,” Ramczyk said. "We've got to be locked in every week and I think that’s known. There’s a huge sense of urgency right now in this locker room.”

Allen said the premium the Saints have placed on character and leadership leaves him certain that if the Saints falter, it won't be because players checked out mentally as a difficult season wore on.

“Everybody faces adversity at some point in time, in life or in the game of football," Allen said. "How you respond to it says a lot about who you are as an individual.

“I’ve never questioned whether this team was going to go out there and fight,” Allen continued. "I don’t know that we’ve always executed as well as we would like and so, therefor, we haven’t probably gotten as good as results as we would like, but there’s no quit in this team.”

Beyond giving up one long Rams TD pass, the Saints didn't give up another reception longer than 20 yards in the game and ranked eighth in the NFL against the pass through Sunday's games. It helps that the Saints have been effective lately in pressuring the quarterback with 10 sacks in the past two games.

The Saints defense has needed to improve its ability to create turnovers all season — and that still hasn't changed after the unit forced no turnovers in Week 11. New Orleans has just two interceptions and five fumble recoveries in 11 gams and has an NFL-worst turnover differential of minus-12.

Linebacker Kaden Ellis has had to play more because of linebacker Pete Werner's injury. He was in on 10 tackles and credited with a 1 1/2 sacks against the Rams. ... Tight end Juwan Johnson has five touchdowns in the past five games.

Defensive back Chris Harris, who was brought in for depth but has been pressed into a more prominent role because of injuries to cornerbacks Marshon Lattimore and Bradley Roby, was beaten deep down the left sideline on Sunday by Tutu Atwell for a 62-yard touchdown.

The Saints were down three defensive ends after Payton Turner went out with an ankle injury Sunday. Cameron Jordan (eye) and Marcus Davenport (calf) missed the Rams game entirely. The Saints' defense also was without Lattimore for a sixth straight game. Werner has missed two games. Left tackle James Hurst is trying to come back from a concussion that sidelined him last weekend.

1 — The number of times the Saints have won this season on the road, where they play their next two games.

The Saints will travel to San Francisco hoping to win two straight for the first time this season. If they do, it sets up a potentially pivotal game in the NFC South in Week 13, when the Saints visit division leader Tampa Bay in a Monday night game.