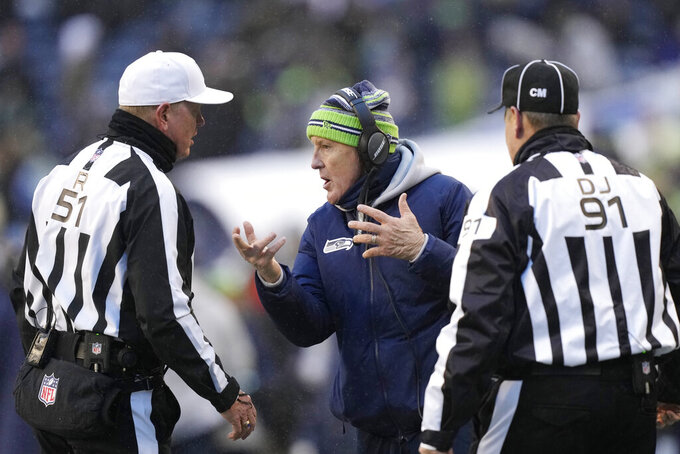 Seattle Seahawks head coach Pete Carroll, center, talks with officials during the second half of an NFL football game against the Chicago Bears, Sunday, Dec. 26, 2021, in Seattle. (AP Photo/Stephen Brashear)

SEATTLE (AP) — After the final kneel down, the few remaining snowballs being tossed from the stands were no longer only directed toward officials or the Chicago Bears. Some were being flung toward the home sideline and tunnel as the Seattle Seahawks left the field.

What was already a lost season for the Seahawks hit a new low Sunday, when they blew a 10-point fourth-quarter lead in a 25-24 loss to the Chicago Bears that eliminated Seattle from playoff contention in the NFC.

The crash has been swift and painful for a team that a year ago won 12 games and was NFC West champions. Seattle (5-10) already was assured of finishing with a losing record, but clung to the slimmest of playoff hopes entering the week. Now, they’re guaranteed the worst season of Pete Carroll’s tenure with the Seahawks — and his first 10-loss season since his first season as an NFL head coach in 1994 with the New York Jets.

Seattle will finish in last place in the NFC West for the first time since moving to the NFC in 2002. The last time the Seahawks finished last in their division was the AFC West in 1996.

After Nick Foles hit one-time Seattle tight end Jimmy Graham on a 15-yard touchdown with 1:01 remaining and the ensuing 2-point conversion to Damiere Byrd gave Chicago the lead, there was no last-second rally engineered by Russell Wilson like in past seasons. On their final series, the Seahawks committed three penalties and Wilson's fourth-down pass attempt to Tyler Lockett was incomplete.

“The biggest thing is finishing. I mean, during the season we’ve had close losses and it’s all about finishing,” said Rashaad Penny, who rushed for 135 yards and a TD. “That’s one thing coach preaches every day.”

Wilson finished 16 of 27 for 181 yards and two touchdowns. There was some good in his performance, including a 41-yard touchdown pass to DK Metcalf in the first quarter, his first TD reception since Oct. 31.

There were also some baffling moves, like Metcalf having just one target in the second half and Wilson taking a costly sack midway through the fourth quarter with Seattle inside the Chicago 10 and holding a 24-17 lead. The lost yardage made for a 39-yard chip shot field-goal attempt for Jason Myers, who pulled it wide left for his sixth miss of the season and his second inside 40 yards.

“I think that the risk-reward trying to score a touchdown, we’ve done it so many times, we’ve hit Tyler and other guys, and unfortunately we weren’t able to make that play,” Wilson said. “And then obviously the situation happens where we don’t end up making it, but I was trying to play ball like I know how to do and always do and try to move around and just try to see if we can find a touchdown there.”

The snowstorm that hit the Seattle area in the early hours of Sunday left plenty of empty seats inside Lumen Field, one of the sparsest crowds in recent memory. It could be even emptier for next week’s home finale against Detroit in a truly meaningless game for both teams — aside from those fans who may show up knowing this may be the final chance the grouping of Carroll, Wilson and Wagner are all together in a Seattle uniform.

The loss to the Bears felt like the harbinger of some significant offseason changes.

Carroll, however, said the focus is on the present: “That’s all we’re doing. We’re talking about this week.”

By Teresa M. Walker 43 minutes ago
By John Marshall an hour ago
By Greg Beacham 2 hrs ago
By Tom Withers 2 hrs ago
By Rob Maaddi 3 hrs ago