Sterns fills in at safety for injured Broncos leader Simmons 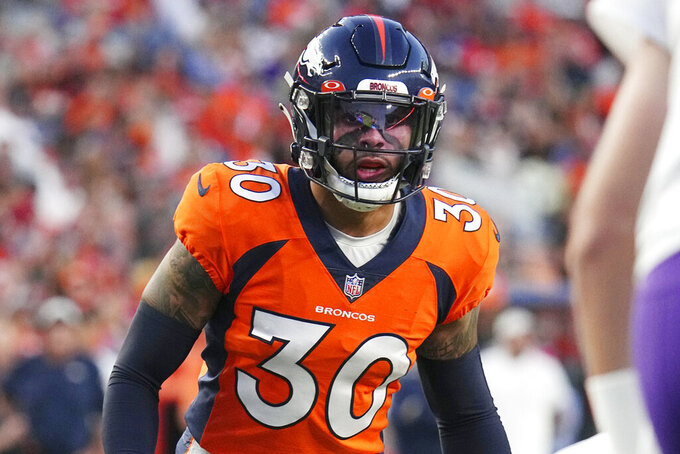 FILE - Denver Broncos safety Caden Sterns (30) lines up against the Minnesota Vikings during a NFL football game on Aug 27, 2022, in Denver. Sterns will step in for Broncos safety Justin Simmons, who has started 66 straight games and been the commanding voice on the field. Simmons injured his thigh in the season opener at Seattle. (AP Photo/Bart Young, File)

ENGLEWOOD, Colo. (AP) — The task ahead for Caden Sterns: take over for a Denver Broncos safety who has started 66 straight games and serves as their undisputed leader.

No pressure — or stress — there.

Sterns, a fifth-round pick out of Texas, steps in after Justin Simmons injured his thigh in the season opener at Seattle. For the first time since 2017, the Broncos will take the field without the familiar No. 31 of Simmons, who was placed on injured reserve and will be sidelined for at least a month.

“Nerves," Sterns said of his overriding feeling heading into Sunday, when the Broncos (0-1) host the Houston Texans (0-0-1). “Just because it’s what the game brings and just the responsibility of coming into this game. But I thrive in situations like this.”

Fellow safety Kareem Jackson has confidence in the second-year player. That's because Sterns has been soaking in the knowledge — and asking all the right questions in the film room — of Jackson and Simmons and even cornerback Pat Surtain II.

Still, those are some mighty big cleats to fill. The Broncos are cutting down on Sterns' special teams responsibilities so he can focus primarily on safety.

The 6-foot-1, 207-pound Sterns does have some playing time under his belt. As a rookie last season, he saw action in 15 games, including two starts when he filled in for Jackson. Sterns also intercepted two passes — one thrown by Jets QB Zach Wilson and the other on a pass from Dallas' Dak Prescott.

“Coming at the expense of losing one of our best players and a captain on and off the field, you don't want to see it,” Sterns said of filling in for Simmons. "But it’s my job to come in and make sure, on the field, that things go as smoothly as possible and there’s no step back.”

This will mark the first time Simmons has missed action since sitting out three games at the end of the 2017 season due to an ankle injury. The 28-year-old Simmons suffered his latest injury in the second half of the 17-16 loss to the Seahawks but remained in the game. He tied for the most tackles on the team with nine and recovered a fumble.

“He’s one of those guys that’s resilient,” Broncos coach Nathaniel Hackett said. “I think he’ll be back very soon.”

Simmons was coming off a 2021 season that saw him pick off five passes and earn second-team honors on The Associated Press' All-Pro squad.

This season, Simmons was named a team captain once again.

“What (Simmons) does for our defense and what he does in that locker room for this team (and) with his leadership, it’s tough,” Jackson said.

It’s up to Sterns to help the Broncos keep in check a Houston offense led by quarterback Davis Mills. Houston went to overtime and finished tied at 20 with the Indianapolis Colts last weekend.

“One thing that we’re always harping on the guys about is no matter what your role is, everybody has to prepare to play,” Broncos defensive coordinator Ejiro Evero said. “Caden has done a good job of that. I feel confident he’ll do a (great) job in there.”

NOTES: WR KJ Hamler (knee/hip) and OL Quinn Meinerz (hamstring) are listed as out for Sunday. ILB Josey Jewell (calf), OLB Randy Gregory (shoulder/knee), DL DeShawn Williams (back), CB K’Waun Williams (wrist), and OL Billy Turner (knee) are all questionable. ... The Broncos will have a special visitor in the stadium Sunday — the Stanley Cup. The Broncos will recognize the Colorado Avalanche during the first timeout in the first quarter. The Avalanche hoisted the Cup for the first time since 2001. ... It was announced that longtime Denver radio host Sandy Clough is retiring. Clough has been a fixture on the airwaves since he came to the Mile High City in 1979.