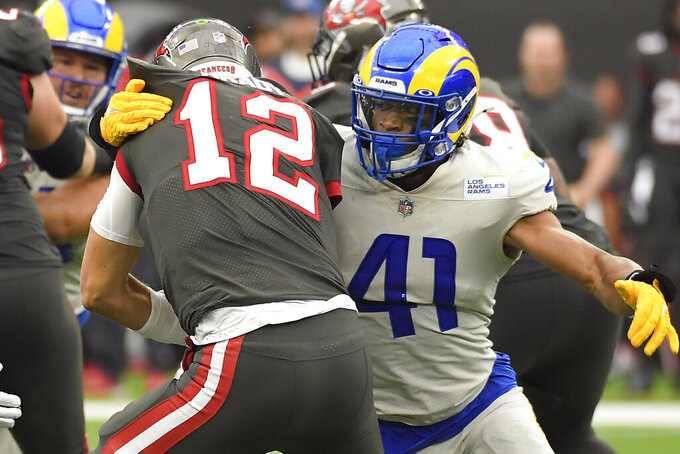 TAMPA, Fla. (AP) — When Tom Brady scrambles three times and is your leading rusher, the running game clearly is not working the way it should.

That’s just one of the things the defending Super Bowl champion Tampa Bay Buccaneers need to fix after losing for the first time this season.

Brady ran for a team-high 14 yards and one touchdown as the Bucs (2-1) were limited to just 35 yards on the ground in Sunday’s 34-24 loss to the Los Angeles Rams.

The 44-year-old quarterback continues to close in on becoming the NFL’s career passing yardage leader, however Arians acknowledges he’s concerned the absence of a productive rushing attack is forcing Tampa Bay to rely too much on throwing the ball.

Brady is averaging 47 pass attempts per game through the first three weeks of the season. He threw 55 times against the Rams, was sacked three times, and hit on five other occasions.

Overall, the Bucs are averaging 3.5 yards per carry and just 56.3 yards per game rushing.

“One thing, we have protected pretty well. We didn’t handle a couple blitzes in that game, and we got beat in a blitz pickup,” the coach added, “but overall we have to get more balanced, there’s no doubt.”

Arians said he’s not contemplating lineup changes, that Fournette and Jones will continue to get most of the workload at running back.

Brady said Sunday that improvement is needed in the passing game, as well.

“I think we’re all going to just really look hard to evaluate every part of what we’re doing. ... All around (the) offense needs to be better,” the seven-time Super Bowl champion said.

Despite playing without receiver Antonio Brown, who's on the COVID-19 list, Brady threw for 432 yards and one touchdown without an interception against the Rams. With 10 TDs passing through three games, Brady is on pace for another big year statistically.

Jones rushed for 11 yards on five carries, while Fournette finished with 8 yards on four attempts against the Rams. It didn’t help that the Bucs played most of the day from behind, limiting the number opportunities to run the ball. Then again, neither running back had much success on the ground the previous two weeks, either.

With the running game not going anywhere, Brady used third-down back Giovani Bernard heavily in the passing game against the Rams. The offseason acquisition who spent the first eight years of his career with the Cincinnati Bengals was targeted 10 times and finished with nine receptions for 51 yards.

Injuries have contributed to problems in the secondary, which has been shredded the past three weeks in wins over Dallas and Atlanta and Sunday’s loss to the Rams. Cornerback Sean Murphy-Bunting was lost to a dislocated elbow in the season opener and cornerback Jamel Dean exited against Los Angeles with a knee injury, leaving backups Ross Cockrell and Dee Delany to play more than the Bucs would prefer.

Linebacker and special teams captain Kevin Minter was activated from the COVID list Monday, but Arians said he was still awaiting word on Brown. The coach expects to know more about the status of Dean (knee), wide receiver Scotty Miller (turf toe) and linebacker Jason Pierre-Paul (hand/shoulder) on Wednesday.

3 — As in three sacks through three games. Tampa Bay had 48 last season, tied for fourth in the NFL.

“The sacks are probably the biggest thing that disturbs me because we can rush the passer,” Arians said. “We're getting close, but we’re not finishing deals.”

Brady and TE Rob Gronkowski return to New England to face the Patriots and coach Bill Belichick for the first time.