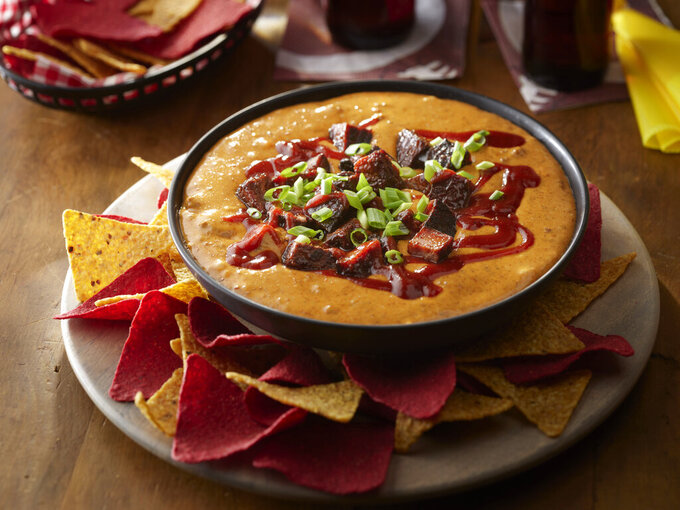 Kenneth Temple is a devout New Orleans Saints fan. Ask him a question about his beloved team, and the first words from his mouth are "Who Dat? Who Dat?"

Still, Temple, a noted chef who has cooked for several NFL players, including Malcolm Jenkins, Brandin Cooks and All-Pro receiver Michael Thomas, recognizes there are three other teams remaining in the playoffs. So when Hormel Chili asked him to create dips for the Super Bowl, he dived right in with versions that reflect not only New Orleans, but New England, Los Angeles and Kansas City .

"The beautiful thing about it is chili and football go hand in hand," Temple says, noting Hormel was a partner with the NFL as far back as the 1950s. "At tailgates or with friends at a viewing party or wherever, it is easy to accommodate a larger crowd."

But his chore for now is to accommodate four distinctly different tastes as part of a contest in which fans will include touchdown dances; a winner and a guest will get tickets to the 2020 Super Bowl in Miami.

We won't give away too many ingredients, but suffice to say Temple catered nicely to each region.

"Chili is versatile, but you can't throw everything in it," he says. "Don't want it to be intimidating."

"I had to make sure I represent the culture right, being from New Orleans," he says. "Nobody wants to eat shrimp with their chili, they don't go together. So what to do?"

Temple quickly came up with an answer: red beans. Add in some onions, celery and bell peppers, sausage, creole seasoning, a few other items and, voila.

"I was thoroughly impressed with it," Temple says. "Friends said that is rolling."

So he rolled on to LA.

"The fun thing about Los Angeles is it's such a large melting pot, so you don't know which culture to pull from to represent the area," he explains. "I came across a Felipe's restaurant known for their chili, they do annual giveaways. So we paid homage to the Latin culture."

Which meant a touch of cilantro and some jalapenos.

Next stop, Kansas City, renowned for its barbecue. As in his LA chili, no beans for this creation.

"My wife is from Kansas City and we went on a barbecue tour of about eight spots recently, so I knew I wanted to play with the burnt ends," Temple says. "That is what they do well and people wait on line for."

This recipe included the flavor of a Kansas City barbecue sauce, which Temple says is "spicier and bolder than I expected. I am used to more of the sweeter side of barbecue. I was impressed with the tang."

He wanted the smokiness of the burnt ends to blend in, but urges folks to mix the meat into this dish, not to simply put the burnt ends on top and chow down.

Finally, he tackled New England, knowing that, like in New Orleans, clams or lobster wouldn't quite work.

"Boston baked beans," he exclaims. "That's a savory sweet payoff, and because you can use a variety of baked beans, I can imagine you will get a lot of different flavors with it."

Temple recently gave cooking lessons to Vikings star receiver Adam Thielen. Indeed, the dance contest emanates from some of Thielen and his teammates' touchdown celebrations. From now through Super Bowl Sunday on Feb. 3, 2019, fans can submit their best touchdown dance via social media by tagging @HormelChili on Facebook, Instagram, or Twitter.

"I told Adam that I am the chef, so this is my side of the field," Temple says with a hearty laugh. "But when I have an engagement with whomever I am cooking with, I want him to throw out some ideas and we bounce them back and forth — especially with people who do not get a chance to cook too many times."

That would be Thielen, who had 113 receptions for 1,373 yards and nine touchdowns this season. Thielen attended the game last year in Minneapolis, but this time will be at home with his wife and two children.

On the menu? Well, chili, of course.

"Since I'm from Minnesota, I thought chili and tots would be perfect together," he says, "and Chef Kenneth said, 'We can add some creole seasoning on the tots and you pour the chili dip on top.' The combo came out perfect!"