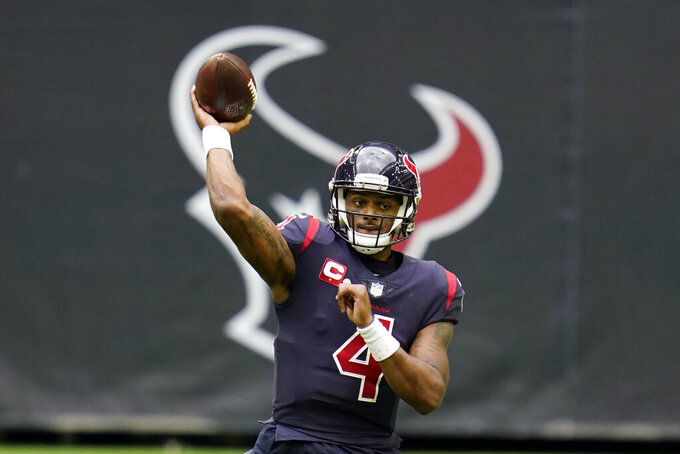 FILE - In this Dec. 27, 2020, file photo, Houston Texans quarterback Deshaun Watson throws a pass during an NFL football game against the Cincinnati Bengals in Houston. Lawyers fighting sexual assault allegations against Watson face a predicament: Defending their client means working to discredit the claims of 22 women who are more likely to be believed in the #MeToo era. (AP Photo/Matt Patterson, File)

HOUSTON (AP) — Lawyers fighting sexual assault and harassment allegations against Houston Texans quarterback Deshaun Watson face a predicament: Defending their client means working to discredit the claims of 22 women who are more likely to be believed in the #MeToo era.

Watson's lawyers have sought to balance their defense of the NFL star while simultaneously condemning sexual violence against women. They've said women who say they have been victims should be taken at their word. Just not these particular women.

The attorneys called the lawsuits against Watson a "money grab" and fired back that all 22 women who have filed suit are lying, a strategy some experts and advocates say relies on long-used tropes designed to minimize such accusations. A lawyer for Watson's accusers said some of them have faced criticism and even death threats, highlighting how sexual abuse cases — whether civil or criminal — still get pushback even four years into the #MeToo movement and remain difficult to prove in the legal system.

In their lawsuits, the 22 women accuse Watson of exposing himself, touching them with his penis or kissing them against their will during massage appointments. At least one woman alleges Watson forced her to perform oral sex.

Watson and his lawyers have denied the accusations. His lawyers have said “some sexual activity” happened during some of the appointments, but that he never coerced anyone. And they presented 18 other female massage therapists who said Watson never acted inappropriately when they worked with him.

Houston police are investigating some of the accusations, and the NFL has launched its own probe.

Rusty Hardin, Watson’s lead attorney, said he believes that concern about sexual assault is “long overdue," and he condemned the attacks and threats against his client's accusers. But he also pushed back against claims that he’s being insensitive, acknowledging the nature of his job in the legal realm puts him in a precarious position amid a societal sea change.

Because of #MeToo, there's a tendency by many to automatically assume such allegations are true, Hardin said.

“If Deshaun Watson comes out and says I never did this, is he attacking the women just by denying he committed the offense? That’s where we’ve gotten to,” said Hardin, a well-known Houston civil and criminal defense attorney who represented ex-pitcher Roger Clemens when he was acquitted in 2012 of charges that he lied to Congress by denying he used performance-enhancing drugs.

In court documents, Watson’s legal team has called the lawsuits part of a “money grab" against the former Clemson University standout, who agreed to a $160 million contract extension last year and became one of the highest paid players in the league. In recent years, the phrase “money grab” has been used as a defense in other high-profile sexual assault allegations, including by convicted former NFL player Kellen Winslow II and by a former San Diego County sheriff’s deputy who was sent to prison for on-duty misconduct with 16 women.

Sarah Klein, an attorney who represents sexual abuse victims for the California-based Manly, Stewart & Finaldi law firm but who isn't connected to the Watson case, said she’s disappointed that people who allege sexual assault are still met with efforts to shame them or to characterize their outcries as extortion.

“Mr. Hardin wants to have it both ways: ‘I support women and survivors but these survivors in my client’s case are liars and extortionists,’” said Klein, a former gymnast who was a sexual abuse victim of Larry Nassar, the former team doctor for USA Gymnastics.

But defending Watson and proclaiming general support for other women who allege sexual assault is “fair play,” according to David Ring, an attorney for one of the women who accused disgraced and convicted movie mogul Harvey Weinstein of sexual assault in Los Angeles.

“Whether people look at that as staged or relevant ... I don’t know,” Ring said.

Tony Buzbee, the attorney representing the 22 women who are suing Watson, has said the litigation is not about money but “female empowerment” and stopping sexual assault.

Buzbee has handled various high-profile cases, including representing former Texas Gov. Rick Perry in an abuse-of-power case and settling lawsuits for 10 teenagers who had accused eccentric Texas millionaire Stanley Marsh 3 of paying them for sexual acts.

“I’m instead focused on the welfare of the women he had contact with and aggressively pursuing their cases in court,” Buzbee said.

Buzbee and Hardin have said no settlement was pending and both were preparing for trial, the first of which might not be for another 1 ½ years. Hardin said if there were any settlements, he would insist they be public to avoid the appearance that Watson was “buying silence, because we’re not.”

Watson’s future with the Texans remains unclear, as do questions of how much the allegations will affect that future. Watson reported to the Texans training camp last month to avoid being fined. He asked to be traded before the lawsuits were filed, and he still wants to play for another team. The NFL has yet to interview Watson, Hardin said.