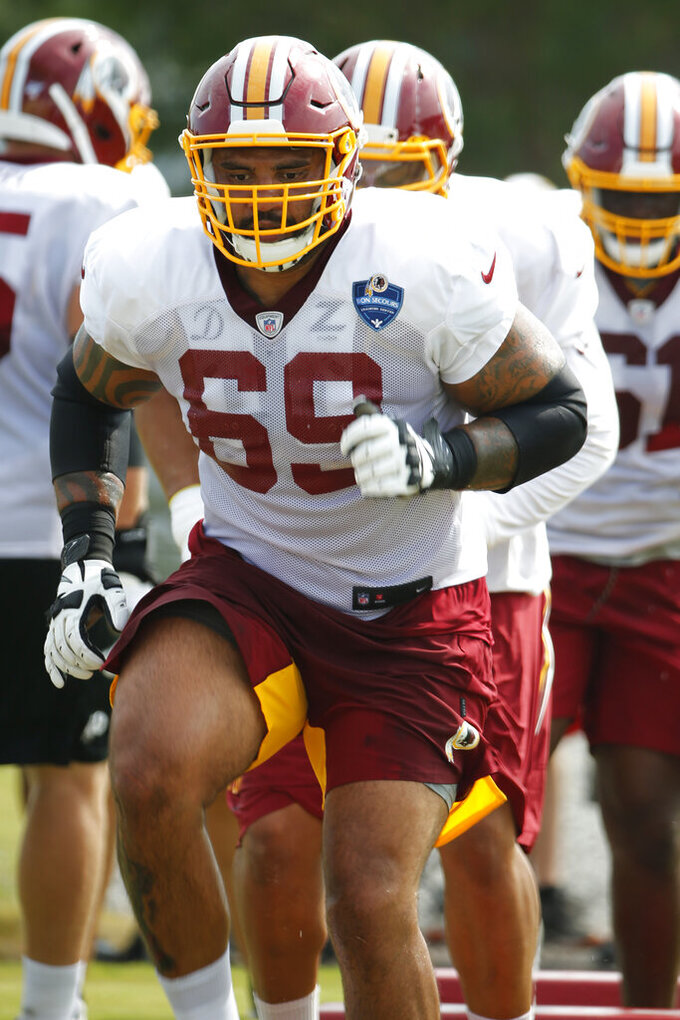 FILE - In this July 31, 2019, file photo, Washington Redskins offensive lineman Hugh Thornton (69) runs drills during NFL football training camp in Richmond, Va. Now 27 months removed from a painful decision similar to what former teammate Andrew Luck made last week, Thornton is attempting to complete an NFL comeback with the Redskins that would be a major milestone in a lifelong journey full of adversity. (AP Photo/Steve Helber, File)

ASHBURN, Va. (AP) — Hugh Thornton had to walk away.

Ankle injuries knocked him off his feet periodically during his first three seasons as a guard for the Indianapolis Colts and cost him his fourth after having reconstructive surgery.

Now more than two years removed from a painful decision similar to what former teammate Andrew Luck made last week, Thornton is attempting to complete an NFL comeback with the Washington Redskins that would be a major milestone in a lifelong journey full of adversity. Thornton was 12 when his mother and sister were murdered in a nearby room in his native Jamaica. He endured a rocky and sometimes abusive relationship with his father, spent time in foster care and bounced around to 12 different schools before returning to his mom's hometown in Ohio for his senior year.

After those experiences and the strife caused by his right ankle not holding up, Thornton is finally in a place that he can tackle this challenge.

"Some things don't work out the way that you'd want them to, and that's OK," Thornton said. "I don't know if I'd be who I am if I didn't have the adversity that I had in my life, and that adversity has led me to be in a position to help other people in my family that weren't able to do the same thing I did."

Thornton is 28 now, and it has been over 15 years since he woke up to find his mother, Michele, and 8-year-old sister, Marley, bound and stabbed to death. As difficult as it is to return to Jamaica, Thornton visited family and friends there during his time away from football — an important step to getting his mind in the right shape as much as his body.

"I just got away completely, just unplugged and recharged," he said. "I just focused on my rehab, focused on my family, focused on my personal life to make sure that when I did have the opportunity physically, spiritually and mentally I was going to be all right."

Bad advice led Thornton to go from a college playing weight at Illinois of 285 pounds to 336 at the scouting combine, and he played at 340 for his first three pro seasons before that took a toll on his right ankle. A third-round pick of the Colts in 2013, he played in 37 and started 32 games for them, but by the time he injured the ankle again, he was mired in what he calls a "bad environment" and had to do something about it.

"He stepped away and realized that he needed to get all the way right," said offensive line consultant Duke Manyweather, who has considered himself something of Thornton's big brother for the past year and a half. "In some regards that meant cleaning up and cleaning out some of the things and people in his life, including some family. I think that meant making himself completely uncomfortable."

Luck reached out at the time, Thornton recalled Monday, "just to let me know that he was proud and just keep pushing forward." So, he did.

Finally healthy in mid-to-late 2018, Thornton worked out in Dallas with Manyweather and offensive linemen like Philadelphia's Lane Johnson and New Orleans' Terron Armstead to get back into shape — he got his weight down to 298. He took part in 140 consecutive workouts, got back into the swing of things with the short-lived Alliance of American Football and went right back to Manyweather when the league folded.

Only one NFL team called.

"He was on our list and we brought him in and he had a really good workout," Redskins coach Jay Gruden said. "Hugh's got good feet, he can move a little bit, so it's good to see him and get him out there and get him back in the game a little bit."

Thornton impressed starting right guard Brandon Scherff right away with his inquisitive nature and hard work. He faces an uphill climb to make Washington's 53-man roster given the numbers game on the offensive line , but Thornton appreciates the chance to show what he can do after so much time away.

"A lot of people don't get a first opportunity, and I'm blessed to get a second one," Thornton said. "I'm just super stoked to be here, and I appreciate everybody that's helped me on my way to get here."

One of those people is John McFarland, who coached him during his senior year at Oberlin High School when Thornton's aunt Lydia opened her home to live there. Lydia Nord in 2012 was sentenced to a year in prison for her role in an attack that left a man dead.

Given the tumult in Thornton's life, McFarland couldn't be more impressed with how he has handled every twist and turn.

"He's overcome so much as a young person that an ankle injury's probably a small thing compared to what he had to overcome as a young person all by himself with the tragedies and kind of being almost all by himself," McFarland said. "I guess what inspired me and amazed me was he wanted to be at school, he wanted to be at football practice. I never heard him make an excuse or complain or woe is me. And you kind of felt when you see a kid that's humble and hard-working and focused like that, you just knew great things were going to happen."

Those great things could still be ahead, though Manyweather already chalks this chapter up as a win for Thornton getting back into an NFL locker room. Thornton will have one final chance to show he deserves a roster spot Thursday in the preseason finale against Baltimore.

"Just by him being able to suit back up and be in the game, if he made the team or any other team, it would be the true definition of resilience," Manyweather said.