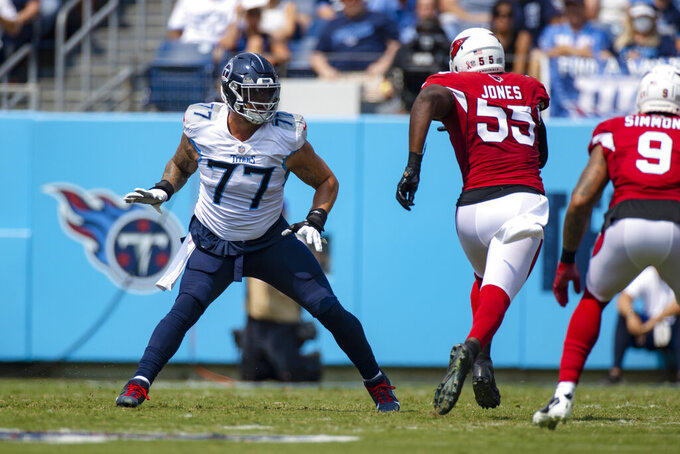 FILE - In this Sept. 12, 2021, file photo, Tennessee Titans offensive tackle Taylor Lewan (77) defends against against Arizona Cardinals linebacker Chandler Jones (55) during the first half of an NFL football game in Nashville, Tenn. Lewan says he didn't deal well with his first game back after the first injury of his career, getting so amped up the three-time Pro Bowler was drained by kickoff. That led to one of the worst performances of his career. Lewan was victimized repeatedly by Jones, who finished the game with five sacks and two forced fumbles.(AP Photo/Brett Carlsen, File)

NASHVILLE, Tenn. (AP) — Tennessee left tackle Taylor Lewan practiced fully all week and is set to play Sunday against the Indianapolis Colts after being scratched for the Titans' win in Seattle.

Outside linebacker Bud Dupree is questionable after not practicing Friday. Starting tight end Anthony Firkser (knee), rookie cornerback Caleb Farley (shoulder) and outside linebacker Derick Roberson (knee) all are out against the Colts (0-2).

Lewan appeared to aggravate his right knee in warmups in Seattle and was inactive for the game. That's the same knee in which he tore his ACL last October.

“I expect Taylor to be ready to go and perform and do his job,” Titans coach Mike Vrabel said. “Again, he was unavailable for the game, he became available, so he practiced.”

Dupree also is recovering from a torn ACL in his right knee. He has started each of the first two games but didn't practice Wednesday or Friday. Dupree was limited Thursday.

“He is still working to be back and improve and it’s just the recovery,” Vrabel said. “I think that is where we are at now, is trying to find out what the best plan is for Bud each and every week. How he responds after games, that is all a part of everybody’s plan whether it is Derrick (Henry) or Bud or anybody else.”

The Titans also promoted tight end Tommy Hudson from the practice squad to the roster.