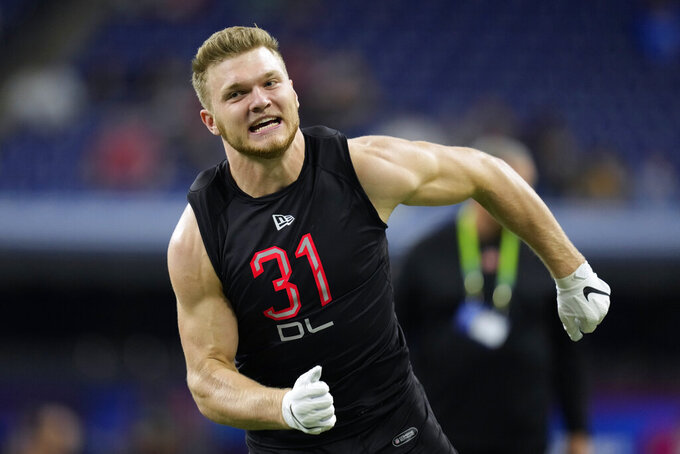 This year’s NFL draft has the chance to be unlike any other in recent years with a possible long wait before any of the players who throw, catch or run with the ball coming off the board.

With no sure-fire quarterback prospects in the draft and several good-but-not-elite receiving prospects, the offensive linemen and defensive players should dominate the early picks with the top skill position player on The Athletic's composite big board of 70 draft analysts being Ohio State receiver Garrett Wilson at No. 10.

There has never been a draft that didn't have a quarterback, receiver, running back or tight end taken in the top 10 picks in the history of the NFL, with a player from those positions going in the top five in all but one of the past 24 drafts.

The only year in that span where it didn't happen came in 2013 when four offensive linemen led by tackles Eric Fisher and Luke Joeckel went in the top seven and the first skill position player taken was receiver Tavon Austin at No. 8 by the Rams.

Quarterbacks have dominated the top of the draft in recent years with the past four No. 1 picks playing the position and at least two QBs going in the top six in each of those seasons.

The only time in the past 21 drafts that a quarterback didn't go in the top three came in 2013 when E.J. Manuel was the first taken at No. 16 by Buffalo. That was one of 11 times in the common draft era that no QB went in the top 10.

Three of those drafts featured star QBs taken after round one with Hall of Famers Ken Stabler and Brett Favre going in the second round in 1968 and 1991, and seven-time Super Bowl champion Tom Brady going in the sixth round in 2000.

This also could be the rare year without a running back going in the first round — something that has happened only once in the common draft era when Bishop Sankey was the first back taken at 54th overall by Tennessee in 2014.

While it remains to be seen how high the top receiver goes, several are expected to be taken in round one. The record for receivers in the first round is seven in 2004 with seven other years having six taken, most recently in 2000.

The betting odds have Georgia defensive end Travon Walker and Michigan defensive end Aidan Hutchinson as the favorites to be taken No. 1 overall by Jacksonville.

That would mark the 12th time a defensive end was taken first in the common draft era starting in 1967, second only to the 26 quarterbacks.

There have been four defensive ends to go first since 2000 with Cleveland taking Courtney Brown in 2000 and Myles Garrett in 2017, and Houston taking Mario Williams in 2006 and Jadeveon Clowney in 2014.

After QBs and defensive ends, the most popular positions for No. 1 picks are running backs (seven), tackles (four), defensive tackles (three), linebackers (two) and receivers (two). No secondary players or tight ends have been picked first.

Since the start of the common draft era, Ohio State and Southern California have produced the most top 10 picks with 72 apiece. That tie could be broken if one of the three star receivers from the two schools goes in the top 10 with the Buckeyes' Wilson and Chris Olave, and the Trojans' Drake London possibilities.

Georgia has a shot at some other records when it comes to colleges and the draft with seven players mentioned as possibilities in the first round. The contenders for the Bulldogs are defensive linemen Walker, Jordan Davis and Devonte Wyatt; linebackers Nakobe Dean and Quay Walker; receiver George Pickens; and safety Lewis Cine.

The record for first-rounders from a school in a single draft is six held by Miami (2004) and Alabama (2021). With Walker, Davis and Wyatt the most likely to go in round one. The Bulldogs should join Clemson from 2019 as the only schools with three defensive linemen to go in the first round. The Tigers had Clelin Ferrell, Christian Wilkins and Dexter Lawrence go that year.

If LSU cornerback Derek Stingley Jr. cracks the top 10, the Tigers will join Texas and Ohio State as the only colleges with five top 10 defensive backs in the common draft era.

Teams have given up first-round picks at a record pace with the eight teams without a pick in the opening round the most in the common draft era. The previous record was seven, done in 1973, 2000, 2019 and 2020.

The eight teams with multiple picks in round one is also a record, topping the six most recently done in 2020.

In all, 20 picks in the first two rounds have already changed hands through trades with more possibilities to come during the draft.