Trubisky, Bears hang on to beat Lions 20-13 as Stafford sits 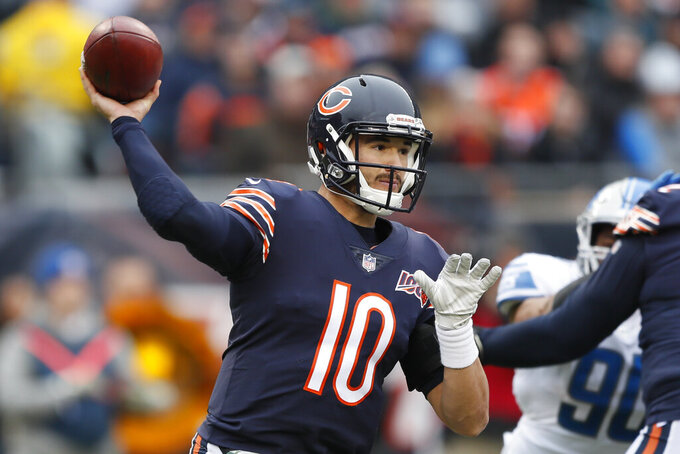 Chicago Bears quarterback Mitchell Trubisky throws against the Detroit Lions during the first half of an NFL football game in Chicago, Sunday, Nov. 10, 2019. (AP Photo/Charlie Neibergall)

CHICAGO (AP) — Mitchell Trubisky and the Chicago Bears finally gave their frustrated fans something to celebrate.

The defending NFC North champions got their offense in gear, snapped their four-game losing streak and let loose afterward.

Trubisky tied a season high with three touchdown passes, and the Bears withstood a late charge by Detroit with Jeff Driskel filling in for injured quarterback Matthew Stafford, beating the Lions 20-13 on Sunday.

Detroit ruled out the 31-year-old Stafford hours before kickoff because of hip and back injuries, ending his streak of 136 consecutive starts. It was the first time he missed a regular-season game since 2010.

Chicago (4-5) quieted the boos by getting its struggling offense going late in the first half, scored two touchdowns early in the third quarter and hung on to win for the first time since beating Minnesota in Week 4. Detroit (3-5-1) lost for the fifth time in six games.

"Four games is a long time," Bears coach Matt Nagy said. "I just sat back. Just to be able to watch the guys (in the postgame celebration). ... They ended up doing some one-on-one dancing, which is pretty neat. It's exciting. We enjoy it. It brings you together."

It comes at a time when the Bears looked as if they were falling apart. With soaring expectations after going from worst to first in Nagy's first season last year, little has gone right this season. And Chicago nearly gave away a 14-point lead, with Driskel orchestrating the late push.

He threw a 47-yard touchdown pass to Kenny Golladay to cut it to 20-13 with 5:53 remaining. And he led Detroit from its 10 to the Chicago 25 on the game's final drive. But with the ball on 25, he overthrew Marvin Jones Jr. in the end zone as time expired on a play that would not have counted because of an illegal forward pass penalty.

"I want to look at our team and say, wow, we really came out and fought really hard," coach Matt Patricia said. "Everything else that everyone is going to try to pile on the situation. Those guys just played really hard for 60 minutes. They tried to do everything they can do to win."

Trubisky completed 16 of 23 passes for 173 yards in another solid outing against Detroit. It wasn't as good as his performance against the Lions last year in a win at Soldier Field, when the No. 2 overall pick in the 2017 draft threw for 355 yards and three touchdowns.

Trubisky got sacked five times. But overall, this was a positive step for the struggling quarterback.

"I think when you go through a stretch like we did, it's tough," Trubisky said. "And I think days like today you appreciate just a little bit more, just getting back to it and getting back to that good feeling of winning."

Patricia said the Lions decided Sunday not to play Stafford. He described his quarterback as "day by day, week by week" and wouldn't get into specifics about the injury.

Driskel performed rather well in his sixth career start, going 27 of 46 for 269 yards with a touchdown and interception. He also got some help from Stafford.

Matt Prater kicked two field goals for the Lions, who dropped their third straight against Chicago after winning nine of 10.

Held to 9 yards in the first half against Philadelphia the previous week, the Bears punted on their first four possessions before breaking through late in the half. They went 80 yards, with Trubisky hitting Braunecker on the right side of the end zone from the 18 to make it 7-6 with 25 seconds remaining.

The Bears added touchdowns on their first two drives of the third.

Cohen caught a 9-yard swing pass for a touchdown after Darius Slay got called for interference trying to defend Allen Robinson. Kwiatkoski then intercepted Driskel at the Detroit 29, leading to Gabriel's 18-yard TD catch . And Eddy Pineiro nailed the extra point after missing his previous attempt to make it 20-6.

The Bears flip-flopped Cody Whitehair and James Daniels, with Whitehair starting at center and Daniels at left guard.

Lions: RB Ty Johnson (concussion) and RT Rick Wagner (concussion) left the game in the second quarter. Wagner was taken from the field on a cart after he was hurt blocking on a run by J.D. McKissic. ... DT Kevin Strong left the game with a rib injury.

Bears: LB Danny Trevathan (elbow) left in the first quarter. He ran off the field with his arm dangling by his side after it bent awkwardly as he tried to sack Driskel.