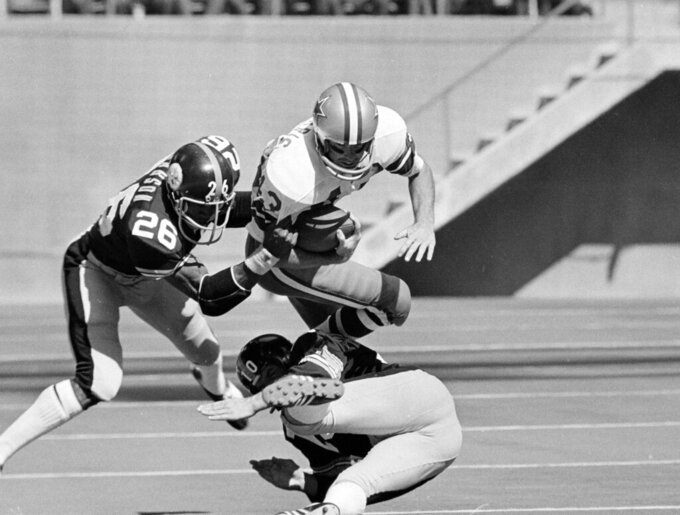 File-This Oct. 8, 1972, file photo shows Dallas Cowboys safety Cliff Harris (43) making a 45-yard return on a second quarter punt Oct. 8, 1972 in Irving, Texas before being brought down by Steelers' Preston Pearson (26) and Roy Gerela (10). Harris and receiver Drew Pearson, who also will be inducted this year as part of the class of 2021, are the first undrafted Cowboys among their 15 players in the Hall of Fame.(AP Photo/File)

DALLAS (AP) — Cliff Harris was preparing for one of his six Pro Bowls with the Dallas Cowboys in the 1970s when Minnesota coach Bud Grant went over the defensive signals for a game that's always been more exhibition than competition.

Hold up one finger for zone, two for man to man.

“I was like, ‘Wait, I need more,’” Harris said with a chuckle. “Where are the routes they run? And what do we expect on first-and-10? I need more information.”

That studious nature at safety helped Harris on the improbable path from being undrafted out of tiny Ouachita Baptist in Arkansas to the Pro Football Hall of Fame as part of last year's special centennial class.

Harris and receiver Drew Pearson, who also will be inducted this year as part of the class of 2021, are the first undrafted Cowboys among their 15 players in the Hall of Fame.

“Captain Crash” combined hard hitting with speed and anticipation on the “Doomsday” defenses of the 1970s, the heyday of America's Team. Harris is the fourth Dallas defender from that era in Canton after Bob Lilly, Mel Renfro and Randy White.

NFL veterans went on strike for about three weeks in 1970, giving Harris and other rookies more time with coaches before an exhibition schedule that was much longer in those days, six games in this case.

Harris has a commemorative ball in the study of the 72-year-old's Dallas home from the second game of his rookie season, a 28-10 victory over the New York Giants. The late Cowboys coach Tom Landry had spent most of his playing career with the Giants.

In a game the Cowboys trailed 10-0 at halftime, Harris intercepted two passes, and now looks back at that as the catalyst for a career that included two Super Bowl victories, trips to three others, and three All-Pro seasons.

“He wanted to beat them bad,” Harris said of Landry. “I remember him coming into the locker room and being mad and saying, 'You’re not playing like professionals. You're playing like amateurs drawing pay.'”

With the U.S. at war in Vietnam, Harris had to juggle National Guard duties during his first few NFL seasons, sometimes reporting for duty during the week and usually getting to rejoin his teammates for games.

Harris recalled having to report to Fort Polk in Louisiana the morning after a 54-13 loss at Minnesota five weeks into his rookie season. He said he kept his seat on a bed after a sergeant ordered him and others to clean their barracks.

“An officer came in and sat down beside me and said, ‘I know who you are and what your story is and here’s the deal. You get up and clean or we're going to send you to the brig and it's going to be uncountable time,'” Harris said. “I said, ‘Where’s the broom?'”

Waters, a third-round pick, and Harris came in together, started as rookies and were synonymous with the Dallas secondary until Harris retired after 10 seasons in 1979. That was the same year Hall of Fame quarterback Roger Staubach shocked the Cowboys by stepping away.

Landry wasn't ready for Harris to retire either, and asked him to stay another year. Harris stuck with his plan and had a long career in the energy industry, starting in an era when NFL players needed other sources of income.

Harris said there was talk of him coming out of retirement a year later for a playoff game against Atlanta, but it didn't happen. He finished with 29 interceptions, and his 16 fumble recoveries are tied for the second most in club history.

“He had speed. He had toughness,” said Gil Brandt, the personnel director who teamed with Landry and general manager Tex Schramm to build the first Dallas dynasty and joined them in the Hall of Fame two years ago.

“He was a competitive guy,” Brandt said. “If he had been at the University of Texas or something like that, Texas A&M, he'd have been a first- or second-round draft pick.”

Brandt and the Cowboys found Harris and others like him through a scouting system that assigned point values to players in various categories. They were the first to use computers to process their scouting reports.

Harris still talks of computer printouts he used to prepare for games. He says the value Landry placed on such preparation fit well with a math and physics major from an NAIA school. And that's part of the reason Ouachita Baptist's football stadium and a small school defensive player of the year award are named after Harris.

“I didn't realize I had studied as much as I had,” Harris said. “I've been reading this book about the subconscious mind and the reactions that you make because of the information you put in your brain. That was true to form with Landry's, ‘Preparation beats reaction.’”

Harris even wanted to apply it to the Pro Bowl.