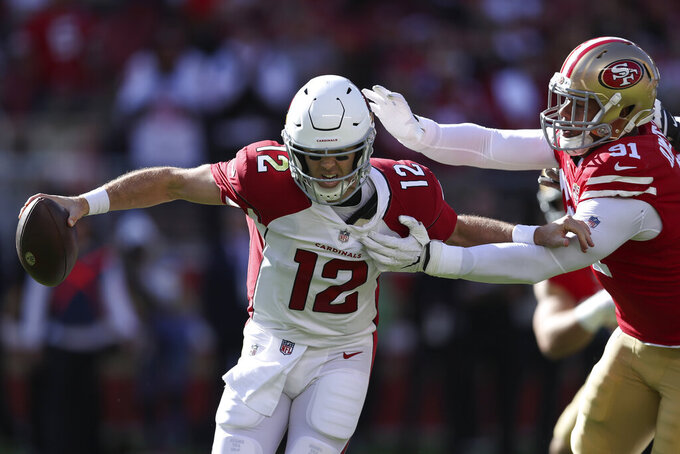 TEMPE, Ariz. (AP) — The Cardinals are one of the NFL's best teams through the first half of the season partly because they have players such as MVP candidate Kyler Murray and star receiver DeAndre Hopkins on the roster.

But don't forget guys such as Colt McCoy, James Conner and Eno Benjamin.

The Cardinals (8-1) hit the halfway point with perhaps their most impressive win of the season, showcasing their depth by beating the San Francisco 49ers 31-17 on Sunday.

Murray and Hopkins were out with injuries, but Arizona kept rolling, looking like a team that's built to go deep into the postseason.

The 35-year-old McCoy was excellent in his first start for the Cardinals, completing 22 of 26 passes for 249 yards and a touchdown. Though he's not as mobile as Murray, he's good at making the right reads and proved he can still play at a high level. Conner ran for two touchdowns and also caught a touchdown pass, continuing his career year.

“It’s been a fun group to be around,” Cardinals coach Kliff Kingsbury said. “No matter who’s playing, who we plug in, they show up, they work hard.”

Benjamin had a highlight-reel 21-yard touchdown run to push the Cardinals ahead 31-7. The local fan favorite — he played in college at Arizona State — will probably be needed more in the near future since Chase Edmonds is out with ankle injury that could linger a few weeks.

“It's a battle of attrition once you hit the second half of the season,” Kingsbury said. “What you've got is what you've got.”

Arizona's 8-1 record is tied for the best nine-game start in franchise history. But last year's experience — starting with a 6-3 record before stumbling to an 8-8 mark — is one reason the Cardinals aren't getting too giddy just yet.

“I don’t think anybody in this locker room is looking at the Super Bowl,” McCoy said. “I think we’d be foolish to do that. We’ve got a lot of tough games coming up and we lock in each week. We enjoy these moments. We’ll enjoy the plane ride home, but this group here thinks one week at a time and there’s a lot of good veteran presence in there.”

Pretty much everything. Murray has turned into one of the league's elite QBs and Hopkins remains as good as ever. Conner has been the prefect addition in the backfield and the offensive line has been solid despite multiple injuries.

The defense has absorbed losing DE J.J. Watt and has still been productive. Veterans such as Chandler Jones, Jordan Hicks, Budda Baker and Markus Golden have all had good seasons. The front office keeps making big moves, too, bringing in guys such as TE Zach Ertz in a midseason trade.

The Cardinals keep winning games despite absorbing injuries. The resiliency has been impressive but there's little doubt they need Murray and Hopkins back on the field if a deep playoff run is in the cards.

Conner. The Cardinals knew they were getting a good running back when they signed him in the offseason, but they never could have expected he'd be tied for the league lead in rushing touchdowns halfway through the season. Honorable mention goes to Golden, who has nine sacks and been the team's most consistent defensive player.

LB Zaven Collins. The rookie really hasn't been bad, it's just a reflection on how good everyone else has been. The No. 16 overall pick has had an up-and-down start to his career, but still looks like a future cornerstone.

The Cardinals couldn't have asked for a much better first half. Now they'll try to limit the injuries, get their stars healthy, and try to hold off the Packers and Rams for the top seed in the NFC playoff race.