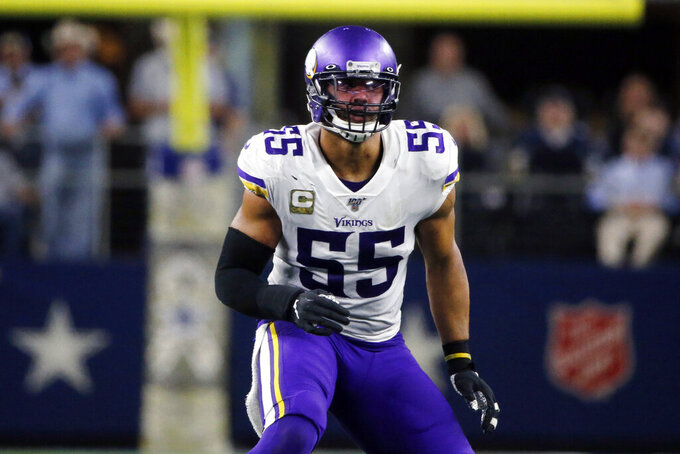 FILE - Minnesota Vikings outside linebacker Anthony Barr (55) drops into coverage against the Dallas Cowboys during an NFL football game in Arlington, Texas, in this Sunday, Nov. 10, 2019, file photo. Finally, this appears to be the week the Minnesota Vikings will have Anthony Barr back on the field. Injuries have kept the four-time Pro Bowl linebacker out for the last 18 games. (AP Photo/Michael Ainsworth, File)

EAGAN, Minn. (AP) — Anthony Barr has been cleared to rejoin the Minnesota Vikings, putting the four-time Pro Bowl linebacker back in action after an 18-game absence and giving a lagging defense a valued asset.

Barr was sidelined by a balky knee early in training camp. His mind suffered along with his body.

“It’s been difficult. Mental health is a real thing," Barr said. "I’ve had my down days, but fortunately I have a great support system with my family and friends. I think I'm realizing there’s a lot more to life than football. It’s been my life since I was 9 years old, so not having that part of it was tough. I promise you nobody wants to play more than me. It’s all I want to do. So, I’m just happy to be at a point where I can finally do that again.”

What made the wait more excruciating was the fact he tore a pectoral muscle in the second game of last season and hasn't been on the field since that game in Indianapolis on Sept. 20, 2020. Nonetheless, Barr was not so impatient with the process that he was going to succumb to any pressure — from himself or otherwise — to push through the pain in a way that might put him at risk for a setback. He was intentional about voicing his discomfort with the knee to the coaches and the athletic training staff.

“I’m at the point of my career where I’m comfortable being honest with myself. What’s the point of lying about it when I know I’m not ready? Yeah, it sucks I can’t be out there and I’d love to help, but I don’t think I’d be doing anything that would make us better. I’d probably be a liability out there,” said Barr, who reworked his contract earlier this year to give the Vikings some salary cap relief and will now become a free agent in the spring.

Barr has declined to discuss his specific condition, but his comments and those from coach Mike Zimmer have indicated it's a chronic issue involving discomfort in the joint that comes and goes. Nick Vigil has filled Barr's every-down role at the strong side spot and will likely shift back to the weak side position to make room for Barr, but perhaps not on every snap for now.

“When there’s a new toy out there, a good player, you want to ride him until the wheels fall off,” defensive coordinator Andre Patterson said. “But we can’t do that. We have to make sure we’re smart with him.”

Barr was a full participant in practice Wednesday, as sure of a sign as any he's back. The Vikings are 25th in the NFL in yards allowed — though 11th in points allowed — and could use the boost.

“I really owe this to my teammates more than anybody. They’ve been grinding. They’ve been working," Barr said. "I haven’t been able to play with them for awhile, so that’s my biggest motivation, getting back with those guys."

There are several question marks around Barr this week, with the Vikings (1-3) badly needing a win Sunday against Detroit.

Vigil did not practice Wednesday because of an ankle injury. Neither did defensive tackle Michael Pierce, who aggravated an elbow injury during the previous game. Cornerbacks Cameron Dantzler and Harrison Hand were placed on the COVID-19 reserve list. Dantzler said on Twitter he is vaccinated and expected to be cleared soon.