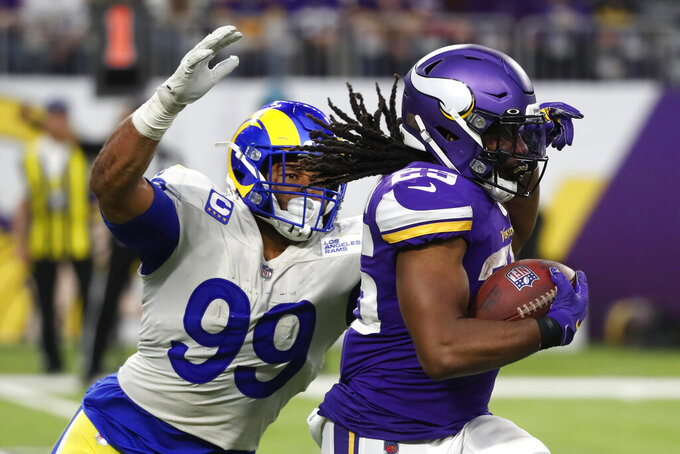 EAGAN, Minn. (AP) — The Minnesota Vikings had an opportunity Sunday to legitimize their playoff standing despite starting the day with a .500 record.

But an offense that stumbled on third down (2 of 12) and in the red zone (two touchdowns in five trips inside the 20, including one scoreless possession) and a defense being run over by Los Angeles (159 yards rushing) provided the statistical snapshot of the 30-23 loss.

Yet, perhaps more troubling was the emotional side of Sunday’s game. A day after Christmas, Minnesota’s exuberance didn’t match the setting of a game with vital playoff implications.

“I wouldn’t necessarily say the energy was just quite dead, it definitely wasn’t the same,” cornerback Patrick Peterson said Monday. “So, us players have to do a better job of bringing our own juice. That starts in Pop Warner. You shouldn’t need anyone to juice you up for a football game. Just us as players, we have to do a better job of making sure we have our mindset right once we step into the stadium.”

The listlessness was felt by many.

Second-year receiver Justin Jefferson said he felt the lack of energy right away.

“I felt it as soon as I came into the locker room,” Jefferson said after the game. “I was trying to pick up the guys and everything, but still came out slow, still didn’t come out with that energy that we needed to, especially with this type of team.”

Linebacker Anthony Barr wondered if there was some type of Christmas hangover.

Coach Mike Zimmer certainly felt it early, too. He tried to jolt his team with a fiery speech in the pregame huddle on the field.

“He just told us we’ve got to bring our own energy because it didn’t feel like — it felt like it was a little dead inside (U.S. Bank Stadium),” Barr said. “It’s usually got a nice buzz, and for some reason, it wasn’t like that. I’m not saying that’s why we lost. I’m just saying that I think that’s why he came in there and was letting us know we had to play with a little more energy and find our own energy today.”

Minnesota went three-and-out on its first possession and its second possession ended with Kirk Cousins’ first red-zone interception of the season. Meanwhile, the Rams built a 10-0 lead.

The Vikings (7-8) fell out of playoff position and now will need help even if they win their final two games.

Running back Dalvin Cook missed Sunday’s game while on the COVID-19 list. Backup quarterback Sean Mannion developed symptoms and tested positive before Sunday’s game, leading to heightened concern for Cousins, who is unvaccinated.

Zimmer said the team will have more safety measures in place this week for the quarterbacks, including not having them in the same room together.

Minnesota stayed in Sunday’s game thanks to an opportunistic defense. The Vikings intercepted Rams quarterback Matthew Stafford three times. They’ve generated six turnovers the past two games and are now 10th in the league with 22 takeaways this season.

Minnesota is plus-9 in turnover differential this season, the sixth-best mark in the league. Every team with a better ratio is currently in playoff position, as are two teams right behind the Vikings.

Stopping the run has long been a staple in Minnesota and Zimmer's defenses. It’s not the case this season.

Los Angeles ran for 159 yards as a team and Sony Michel finished with 131 yards rushing, the highest total for a Rams player this season and the second-highest individual total allowed by the Vikings.

Barr has missed six games this season due to knee and hamstring injuries. He had his most impactful game Sunday. Barr had two interceptions, two pass deflections, seven tackles and one quarterback hurry as the Vikings gave Stafford fits.

Klint Kubiak has coordinated Minnesota’s offense to the ninth-highest yardage total in the league. But the offensive struggles Sunday, particularly inside the 20, led to Jefferson saying the team needs to be more aggressive in the red zone.

Zimmer said Monday he hopes Cook and receiver Adam Thielen (ankle) will be able to play on Sunday. Cook would have to be cleared. Thielen returned after missing two games, but was clearly bothered by the ankle and looked to aggravate the injury after being tackled early in the game.

Offensive lineman Oli Udoh was added to the reserve/COVID-19 list on Monday, the fourth player on the list with Cook, Mannion and tackle Rashod Hill.

130.5 — Minnesota is allowing 130.5 rushing yards per game to opponents, the fourth-most in the NFL. The past five opponents have all run for over 100 yards.

Creating energy shouldn’t be a problem next week. The Vikings travel to face rival and NFC North champion Green Bay on Sunday night.