Wentz plays but not as mobile as Tannehill in Colts' loss 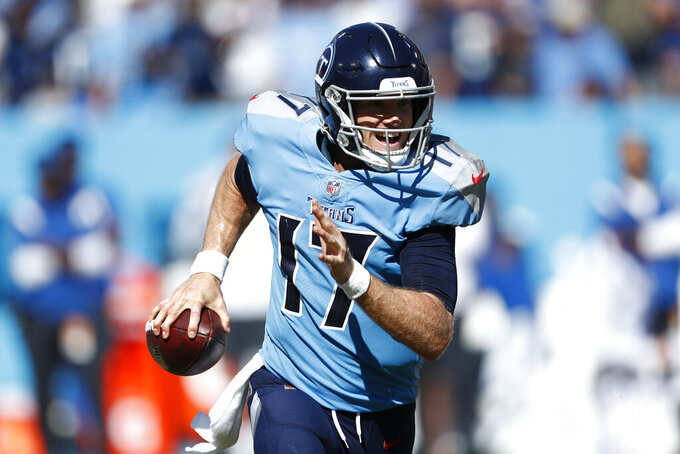 NASHVILLE, Tenn. (AP) — Carson Wentz had his ankles taped and stayed in the pocket when he moved around.

Scrambling was out of the question.

“It didn’t feel great when I did that,” the Colts quarterback said.

On the other side, Titans quarterback Ryan Tannehill showed the difference a mobile quarterback can make when healthy. He ran five times and matched his career high with 56 yards, helping Tennessee beat Wentz and the Colts 25-16 on Sunday.

Coach Frank Reich called a little bit different game with Wentz limited by the pair of sprained ankles that made him a game-time decision. Wentz had been the Colts' second-leading rusher. Against the Titans, he was close to scrambling upfield when he flipped the ball to Nyheim Hines for an incompletion late.

Wentz threw incomplete on his first three passes and got rid of the ball plenty under pressure. His legs were missed when the Colts (0-3) had first-and-goal twice in the second half. Even working from the shotgun, Wentz threw five incompletions with the Colts settling for a pair of field goals.

“I thought Carson did a good job understanding what his limitations were and playing within that,” Reich said. “You know, he is our quarterback, and we felt like him at whatever 70 percent or 80 percent, whatever he is, is our best option to beat a very good football team on the road.”

Tannehill had people worried for a different reason.

When he decided to scramble on a couple of bootlegs, he didn't slide and instead went shoulder-first for yardage. He scrambled for 17 yards on Tennessee's first drive for a touchdown in the first quarter. He also ran for 13 yards and a first down on a drive that used up 7 minutes, 22 seconds.

Tannehill said he heard from coach Mike Vrabel on needing to slide and expects more Monday when the Titans watch tape of this game.

“I try not to take any big hits, try to be smart with it. If I can get on the edge or the shoulder and it is not going to be a big hit, then I am all right with it,” Tannehill said.

Teammate Derrick Henry, who sent Colts linebacker Darius Leonard bouncing at one point, had one word of advice for his quarterback on how to finish his runs.

“Slide,” Henry said. “He doesn’t do it, but that’s how he is, man. He wants to get in there and get the tough yards and he does a great job doing it.”

Wentz's top priority now is healing up. The Colts still have two more road games left as they look for their first win this season. He credited God and the Colts' training staff for being able to play.

“I am very confident just how quickly it is already from not really even being able to walk (the) first two days this week to playing (Sunday)," Wentz said. “I’m very confident that we can progress this thing along and be myself.”