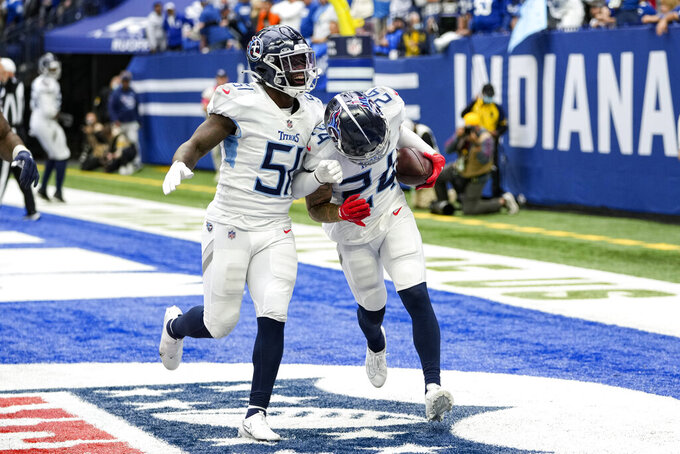 Tennessee Titans cornerback Elijah Molden (24) celebrates a touchdown on an interception with linebacker David Long (51) in the second half of an NFL football game against the Indianapolis Colts in Indianapolis, Sunday, Oct. 31, 2021. (AP Photo/AJ Mast)

Either way, the result was the same. Wentz threw two costly interceptions in the final 7 1/2 minutes, giving away 10 points and allowing Tennessee to walk away with a key 34-31 overtime victory.

“They both hurt, especially the second one no doubt, because they were already in field-goal range," he said. “I trust our defense, but I put them in a bad situation there. I made a bad decision there."

Wentz had played virtually flawless football through the first 31 quarters this season despite missing most of training camp because of foot surgery — and even after spraining both ankles during a Week 2 loss to the Los Angeles Rams.

He entered Sunday's game with 11 touchdown passes, one interception and a franchise record-tying streak of four straight games with multiple TD throws and no interceptions. And though he played well again, finishing 27 of 51 with 231 yards and three touchdowns against the Titans, it's the end of his streak everyone will remember.

With Wentz under duress in his end zone, the score tied at 24 and 1:29 left in regulation. Wentz tried to save the Colts by flicking the ball left-handed into the middle of traffic — right into the arms of rookie cornerback Elijah Molden.

“I just had to run up there and get the ball," Molden said, describing his first NFL score on a 2-yard interception return. “It was a pretty easy interception. I didn't really have to do much, it was a great (pass) rush."

Reich wasted no time in letting Wentz know his thoughts, blaming himself for calling a tight end screen pass from near the goal line at the same time he anticipated Tennessee (6-2) bringing the pressure.

“They were sitting right on it and I told Carson right after the play. I said ‘That's 100 % my fault, that's a terrible play call," Reich said. “It’s too risky, it’s a bad call.”

Wentz trotted right back onto the field seemingly unfazed and took advantage of a rare second chance. He bailed out the Colts on third down with a 38-yard toss to Michael Pittman Jr., then came a 42-yard pass interference call on Titans safety Kevin Byard in the end zone.

On the next play, Reich sent Wentz in motion out of the backfield and Jonathan Taylor took the handoff from Nyheim Hines. Taylor's 1-yard scoring run with 22 seconds forced overtime and gave Wentz yet another chance to redeem himself.

But after winning the coin toss and failing to pick up a first down, Wentz made another poor decision when he tried to hook up with Pittman by throwing from the right hash mark to the left sideline.

This time, Byard read the play perfectly, picked it off and returned to the Colts 32. Four plays later, it was over and all Wentz could do was cringe.

“I feel like I beat us today at the end of the game with those turnovers," he said. “As a competitor, you feel like you let your guys down even though I have the utmost confidence in our defense and they did a great job of shutting them down today."