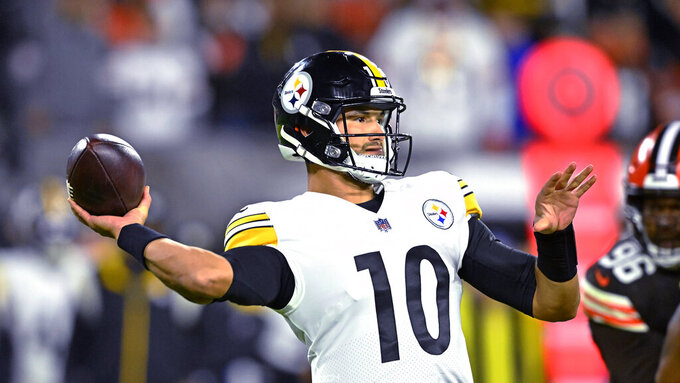 Pittsburgh Steelers quarterback Mitch Trubisky (10) throws a pass during the first half of the team's NFL football game against the Cleveland Browns in Cleveland on Thursday, Sept. 22, 2022. (AP Photo/David Richard)

OPENING LINE: Steelers by 3 1/2 according to FanDuel SportsBook.

TURNOVER DIFFERENTIAL: Jets minus-4; Steelers plus-3.

JETS PLAYER TO WATCH: QB Zach Wilson. The second-year QB is set to make his season debut after suffering a bone bruise in the preseason opener on Aug. 12 at Philadelphia and needing arthroscopic surgery to repair a torn meniscus in his right knee. Coach Robert Saleh doesn't think rust will be a factor because Wilson has ramped up activities at practice the past few weeks, but the focus will be on how he — and his knee — respond to game action.

STEELERS PLAYER TO WATCH: QB Mitch Trubisky. Pittsburgh's offense is off to a sluggish start and with each sputtering performance, the clamoring for rookie QB Kenny Pickett grows. The Jets and their very average pass defense may represent Trubisky's best shot at quieting the critics heading into a brutal part of the schedule that begins next week at Buffalo.

KEY MATCHUP: Jets offensive line vs. Steelers front seven. Pittsburgh is not the same without injured All-Pro outside linebacker T.J. Watt, whose ability to create chaos can overshadow the shortcomings of a unit that is still struggling to stop the run. If New York’s injury-riddled and youth-laden line can create a push, it would take some pressure off second-year QB Zach Wilson as he makes his 2022 debut.

KEY INJURIES: The Jets placed LT George Fant on injured reserve earlier this week with a knee injury. Conor McDermott is expected to start in his place. ... LB Quincy Williams was carted off the field with a high ankle sprain last Sunday and will miss the game. ... Pittsburgh comes in relatively healthy following a 10-day break after a loss in Cleveland. CB Akhello Witherspoon (ankle) was ruled out. Levi Wallace, signed during the offseason from Buffalo, will start in his place. ... S Minkah Fitzpatrick began the week in the concussion protocol, but fully practiced all week. ... P Pressley Harvin III (hip) was limited early in the week, but will play. ... The Steelers will be without All-Pro LB T.J. Watt, who is on injured reserve with a left pectoral injury. Pittsburgh is 0-6 without Watt in the lineup since taking him in the first round of the 2017 draft.

SERIES NOTES: The Steelers have dominated the Jets in Pittsburgh, winning 10 of 11 meetings (playoffs included) and own a 20-6 record all time against New York. The Jets did win the most recent meeting, a 16-10 victory at the Meadowlands on Dec. 29, 2019. New York's lone victory in Pittsburgh came in a 22-17 triumph in December 2010, though the Steelers did get a measure of revenge a month later when they beat the Jets on the same field in the AFC championship game.

STATS AND STUFF: The Jets are looking to be at least .500 after four games for the first time since 2017, when they were 2-2 under then-coach Todd Bowles before finishing 5-11. ... Wilson comes to Pittsburgh with a pair of streaks: He has thrown 156 consecutive passes and gone five straight games without throwing an INT. ... WR Garrett Wilson has 18 catches to tie TE Tyler Conklin for the team lead and are the most among rookies. Wilson's 214 yards receiving are tied for second with Atlanta's Drake London, behind only New Orleans' Chris Olave (268) among rookies. ... Conklin’s 18 catches are the most by a Jets tight end through three games since the merger in 1970. ... The Jets are just 17 for 47 (36.2%) on third down this season, ranking them 19th in the league. ... Greg Zuerlein has three field goals of 50 or more yards this season, becoming the 11th player in league history with at least 40 — he has 41 — from that distance. He's also the first Jets kicker to have three field goals of 50 or more yards in the first three games of a season. ... The Steelers bumped DT Montravius Adams to the top of the depth chart, replacing veteran DT Tyson Alualu. Pittsburgh's run defense, which ranked last in the NFL in 2021, has struggled to take a step forward this season. Pittsburgh is 28th in yards rushing, though the Steelers are 12th in yard per carry. ... Slow starts are nothing new in Pittsburgh of late. The Steelers have gone 9-10-1 in September since 2017. Pittsburgh has typically been much better once the calendar flips to October. The Steelers are an NFL-best 41-15 in since Mike Tomlin took over in 2007, including a 24-6 mark at home. ... Pittsburgh is 20-10 when coming off nine days' rest and has won eight straight games the week after playing on Thursday going back to 2013. ... The Steelers are making a habit of playing in close games. Fifteen of their past 20 regular-season games have been decided by eight points or fewer going back to 2021. That number would have been 16 out of 20 if not for a fluke fumble recovery in the end zone on the final play last week in Cleveland. ... Steelers Pro Bowl WR Diontae Johnson has caught at least five passes in 15 straight games, the longest active streak in the NFL. Johnson, however, made a key drop in the second half last week against Cleveland that negated a potentially big gain. ... While Watt is out, third-year outside LB Alex Highsmith is picking up a bit of the slack. Highsmith has 4 1/2 sacks through three games. His career high is six sacks set last season.

FANTASY TIP: Expect the Jets to test Pittsburgh's shaky run defense early in an effort to help Wilson get comfortable. Taking a flyer on Jets RBs Breece Hall or Michael Carter could pay off.