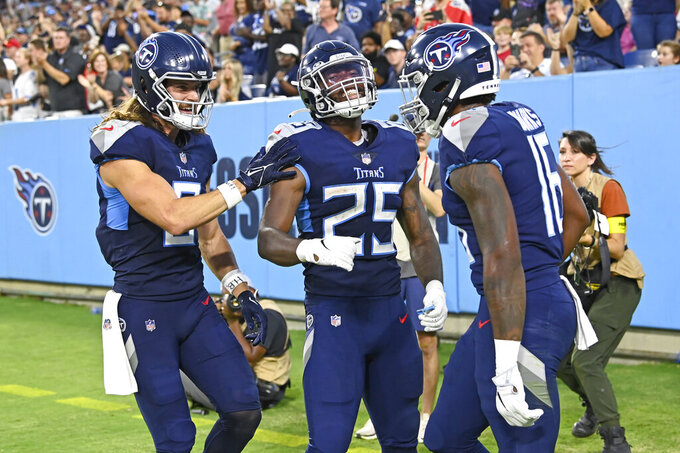 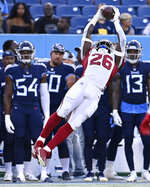 NASHVILLE, Tenn. (AP) — The Tennessee Titans have given rookie Malik Willis plenty of opportunities this preseason to show how quickly he can make the jump from Liberty to the NFL.

And it sure looks as if he might be veteran Ryan Tannehill's backup this season.

“He can beat you throwing in pocket, he can beat you outside the pocket throwing, he can extend plays and then he can also beat you by turning up and running,” Titans coach Mike Vrabel said of Willis. "So there’s a lot of guys that we’re going to defend like that. And it’s difficult.”

Logan Woodside scrambled for a 9-yard touchdown on fourth-and-goal with 52 seconds left to rally the Titans past the Cardinals on Saturday night.

Woodside's rally likely won't be enough to remain Tannehill's backup for a third straight season despite helping the Titans (2-1) finish the preseason with a second straight home win. Woodside was 5 of 9 for 43 yards on his lone drive, but Willis turned in his best performance yet in his third preseason start.

Rookie Jarrett Guarantano tried to rally the Cardinals (1-2), but he was flagged for intentional grounding when being grabbed by Titans linebacker Rashad Weaver for a loss of down and a 10-second runoff. Sam Okuayinonu then sacked Guarantano to end the game.

Willis ran four times for a game-high 79 yards, including scampering 50 yards to set up a 3-yard TD run by Julius Chestnut. He also capped a drive just before halftime with a sidearm throw around Arizona linebacker Myjai Sanders to Treylon Burks across the middle. The first-round pick finished off a 14-yard TD for a 13-7 lead.

The quarterback drafted at No. 86 overall in the third round was sacked four times and was 15 of 23 for 131 yards despite being sacked twice in the first quarter by Cardinals rookie Cameron Thomas. Willis also was intercepted by James Wiggins on a pass deflected by Ben Niemann.

“It was probably like a B-minus," Willis said of how he rated his latest performance. “It was better than the first couple of preseason games just as far as me sitting in the pocket.”

The Cardinals nearly pulled out the win with Matt Prater kicking three field goals, and Guarantano hit Greg Dortch for a 2-yard TD pass late in the third quarter.

Kyler Murray watched his third straight preseason game as Trace McSorley started by hitting his first seven passes for 71 yards to set up a 1-yard run by Darrel Williams on the opening drive. Then he hit a skid completing only 1 of 11 for 10 yards. Andy Isabella finished with five catches for a game-high 115 yards, including a 74-yard catch-and-run.

Arizona coach Kliff Kingsbury said the Cardinals survived the game fairly well with injuries. With DeAndre Hopkins suspended the first six games of the season, Kingsbury liked what he saw from Isabella and Dortch.

Undrafted free agent Ryan Stonehouse punted for the Titans, and the rookie from Colorado State took a big step toward winning the job held by three-time Pro Bowler Brett Kern. Stonehouse boomed a 64-yarder with his impressive hangtime on a ball downed at the Arizona 7. He averaged a net of 41.9 yards on seven punts with three downed inside the Cardinals 20.

Kern is Tennessee's longest-tenured player and ranks third all time with 197 regular-season games played since being claimed off waivers from Denver in 2009. Kern said he knew once he saw Stonehouse punt in April that this would be a real competition that's now so close a coin flip could decide the winner.

“I told him, ‘I’ve been in the league a long time, and I’ve seen three or four people my entire life hit a ball like he does,'" Kern said. "I knew it was going to be hard. I knew what he was really good at, and what he’s really good at I’m probably not, and what I’m really good at, he just needs to work on it.”

Rookie Nicholas Petit-Frere started at right tackle for the Titans. General manager Jon Robinson said during the telecast that the third-round pick out of Ohio State has won the job over Dillon Radunz, a second-round pick in 2021.

Burks went to the locker room with an injured right wrist late in the first quarter. He finished with his best game yet with three catches on three targets for 33 yards. Safety Lonnie Johnson, claimed off waivers Aug. 16, hurt a shoulder but returned.

Cardinals offensive tackle Rashaad Coward hurt his chest early in the second quarter and didn't return. Arizona safety Tae Daley went down but walked off after the Woodside TD run.

The Cardinals open the season Sept. 11 by hosting Kansas City.