Years after Super Bowl glory, Cards' Butler back in desert 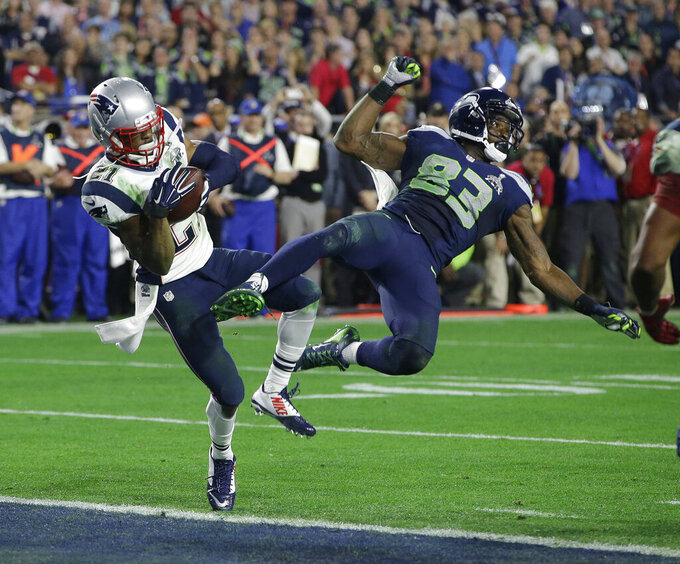 FILE - In this Feb. 1, 2015, file photo, New England Patriots cornerback Malcolm Butler (21) intercepts a pass intended for Seattle Seahawks wide receiver Ricardo Lockette during the NFL Super Bowl XLIX football game in Glendale, Ariz. The biggest moment in Malcolm Butler's career happened right here at State Farm Stadium, when the rookie cornerback stepped in front of a Seattle Seahawks receiver at the goalline, intercepted a Russell Wilson pass, and secured a stunning Super Bowl XLIX victory for the New England Patriots. That play was about 6 1/2 years ago. Butler — who is entering his first season with the Arizona Cardinals — is finding out that's an eternity in NFL time.(AP Photo/Kathy Willens, File)

GLENDALE, Ariz. (AP) — The biggest moment in Malcolm Butler's career happened right at State Farm Stadium, when the rookie cornerback stepped in front of a Seattle Seahawks receiver at the goal line, intercepted a Russell Wilson pass, and secured a stunning Super Bowl 49 victory for the New England Patriots.

Butler, entering his first season with the Arizona Cardinals, is finding out that's an eternity in NFL time.

“I'm getting a little older in the NFL now, so I'm talking to guys who were born in 2000,” Butler said, grinning. “One of my teammates told me he was at the (school) bus stop, talking about the score. I'm getting up there.”

Butler and the Cardinals hope there's more magic left for the cornerback in the desert. The 31-year-old veteran, who signed a one-year deal with Arizona, is one of several 30-somethings the team is relying on this season, including receiver A.J. Green (33), defensive end J.J. Watt (32), linebacker Chandler Jones (31) and center Rodney Hudson (32).

The Cardinals hope Butler's presence can help offset the loss of three-time All-Pro cornerback Patrick Peterson, who was a mainstay in Arizona for a decade before signing with the Minnesota Vikings in the offseason.

Butler will wear Peterson's No. 21 this season, which is the number he's had throughout his career. He thought about taking No. 7 but third-year cornerback Byron Murphy wanted it.

“I got permission from the head man of the team and he said it was OK,” Butler said. “That's no disrespect to Patrick Peterson. I'm not trying to replace him. I'm Malcolm Butler.”

Butler's been a solid NFL player since his career-defining play for the Patriots, making the Pro Bowl in 2015. He spent the past three seasons with the Tennessee Titans, where he had four interceptions and made 100 tackles in 2020.

Cornerback is notoriously tough on players who have reached 30 years old. Any loss of athleticism, especially against the league's elite receivers, is exploited in a hurry. But third-year coach Kliff Kingsbury said he's confident Butler has good years remaining.

“Watching him play last year, just the physical nature of his game, it's something we wanted to get and add to our team," Kingsbury said. “Thought he played at a high level last year and he's continued to do so in camp.”

Kingsbury has good memories of Butler's Super Bowl interception as well. He was in the stands in Glendale, Arizona, cheering for his friend Danny Amendola, who was a receiver on that Patriots team.

“We went crazy in the stands, we couldn't believe it,” Kingsbury said. “We thought it was over and then he makes that play. The whole place goes nuts.”

Kingsbury said Butler's not living off the Super Bowl glory and doesn't say much about the iconic moment.

“He's pretty humble, he doesn't say much,” Kingsbury said. “He's a playmaker. We've seen him make multiple plays in practice, he always seems to be around the ball and he brings a lot of experience to this team.”

NOTES: Kingsbury said receiver Andy Isabella missed practice because he's in COVID-19 protocol. It's the second time during preseason camp that Isabella has missed time in the protocol. Receiver DeAndre Hopkins also missed Wednesday's practice with what Kingsbury called a “minor issue.” ... The Cardinals host the Dallas Cowboys on Friday in a preseason game.