Young Falcons stop themselves with mistakes, brace for Bucs 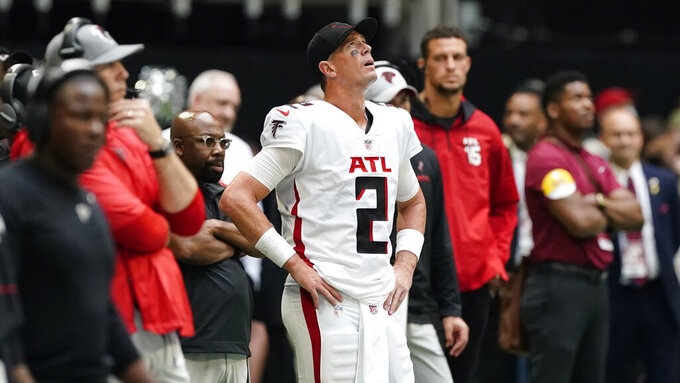 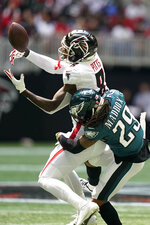 ATLANTA (AP) — The Atlanta Falcons' problem in their lopsided season-opening loss to the Philadelphia Eagles was not the fact they had a rookie coach.

The Falcons' problem was they played like a rookie team, especially on offense.

Repeated breakdowns, including penalties and poor blocking, spoiled coach Arthur Smith's debut. The devastating impact of the unforced mistakes, including illegal formation and false start penalties near the goal line, were painful lessons.

Sunday's 32-6 loss to the Eagles provided Smith much to use as teaching tools as the Falcons face the difficult challenge of preparing for this week's visit to defending Super Bowl champion Tampa Bay.

Smith worried about what could happen if the Falcons fell behind by a large margin and their offense became too reliant on quarterback Matt Ryan. His fears were realized when the Eagles' interior pass rush led by defensive tackle Javon Hargrave took advantage of rookie left guard Jalen Mayfield.

Hargrave had two of Philadelphia's three late sacks. Smith said the inability to protect Ryan late in the game couldn't be blamed on new starters. He said even veterans wouldn't have been able to withstand the rush when the Eagles didn't have to respect the running game.

The Falcons now have fresh, painful evidence that they must remained balanced on offense and they can't withstand unforced mistakes.

Bigger defensive challenges await Atlanta next week, including Ndamukong Suh, Vita Vea and William Gholston on the Tampa Bay defensive front. The Buccaneers are coming off an opening win over Dallas on Thursday night and have had extra time to prepare for Atlanta.

Smith's attempt to assume responsibility for the loss may have sounded like coach's rhetoric. His sincerity was clear when he spoke of addressing critical red-zone mistakes, especially the illegal-formation and false-start penalties on consecutive plays on their second possession.

“You get down on the 2-yard line and you have an illegal formation, I’ve got to clean that up,” he said. "So, yeah, I do put that on me.”

For at least two possessions, the offense showed its potential. The Falcons ran 29 plays and gained 136 yards on the two long drives. Though each drive ended in field goals, the Falcons showed good balance.

Calvin Ridley’s longest catch of the game, for 16 yards, came on Atlanta’s first play. The longest run by Mike Davis, a 12-yarder, followed on the next play. The 72-yard drive stalled at the 3 on back-to-back incompletions.

Rookie Kyle Pitts’ only catch of the first half, a 1-yarder on a fourth-down play, helped the offense compile another long, 15-play drive on the second possession. Back-to-back penalties — illegal formation on first-and-goal at the 2, followed by a false start by rookie Drew Dalman — devastated the drive.

The Falcons didn’t cross the Eagles 49 the remainder of the game.

Mayfield, the third-round pick from Michigan, rotated between tackle and guard in training camp before projected starting left guard Josh Andrews was placed on injured reserve with a broken hand on Sept. 1. Dalman, the fourth-round pick from Stanford, was Atlanta’s other leading option to replace Andrews.

Smith defended Mayfield’s play, noting the rookie held his own as long as the offense could stick to its run/pass balance. On Monday, Smith left open the possibility Dalman or others could compete for the starting job this week.

The Falcons still might consider adding veteran help, though players can return from injured reserve after three weeks. On Monday, the team’s only move was to re-sign linebacker Brandon Copeland.

Perhaps most encouraging was the strong running at times from Davis and especially Cordarrelle Patterson, whose No. 84 was the only sign of his past as a primary wide receiver with Minnesota, Oakland and Chicago.

Davis had 15 carries to Patterson’s seven, but Patterson led the team with 54 yards. The team’s third option at running back, Wayne Gallman, was inactive after signing on Sept. 2 but could still work into the rotation.

Pitts’ much-anticipated debut was a letdown. The tight end finished with four catches for 31 yards, including only one catch for a yard in the first half. He had eight targets.

Pitts said he didn’t think the Eagles keyed on him.

“I’m just part of the team, so whenever the ball come my way, it does,” Pitts said.

The Falcons reported no injuries. Ryan said he was fine after Josh Rosen played the final series at quarterback.

26 — Smith opened his first news conference following a regular-season game by saying “I feel awful for our fans.”

Falcons fans have seen worse than the 26-point loss, but it was the most lopsided season-opening setback for Atlanta since a 48-10 loss at Tampa Bay in 1987. That team finished 3-12 in a strike-impacted season.

The Falcons play their first NFC South game when they visit Tampa Bay next Sunday. It's a change from 2020, when the teams didn't meet until December. In closing a 4-12 finish last season, Atlanta played two of its last three games against the Buccaneers, losing 31-27 at home and 44-27 at Tampa Bay.