49ers could be down 2 more CBs, but hopeful for Kittle 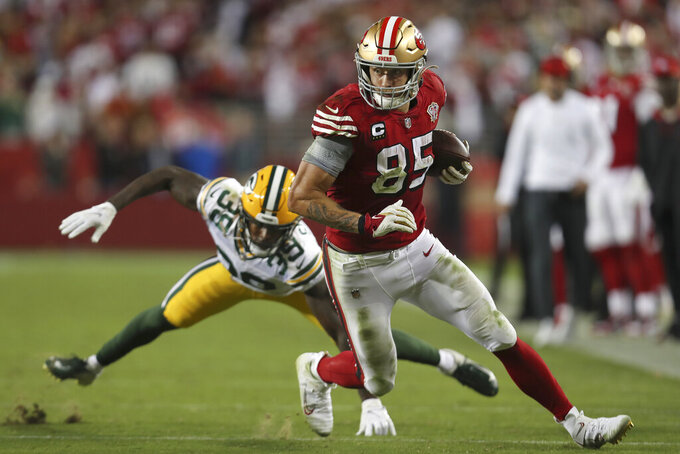 SANTA CLARA, Calif. (AP) — The San Francisco 49ers could be down two more starting cornerbacks for Sunday's game against Seattle but are holding out hope star tight end George Kittle can play.

Coach Kyle Shanahan said Friday that slot cornerback K'Waun Williams will miss the game against the Seahawks with a calf injury and outside cornerback Josh Norman is doubtful with a chest injury. San Francisco already lost its top cornerback, Jason Verrett, to a season-ending knee injury in the opener.

Norman was hospitalized Sunday with bleeding in his lung and will need to pass tests Saturday to determine whether he can play this week.

Kittle was able to get on the field a bit to run at the start of practice in a sign of progress since injuring his calf in last week's loss to Green Bay. Kittle is listed as questionable for the game.

“I’m going to do everything I can to be able to be on the field on Sunday," Kittle said. "If the body says I can go, I’ll be out there.”

Kittle said he's been dealing with swelling and pain in his calf and Shanahan said he expects to know by Saturday whether Kittle can play.

“The fact that he wasn’t ready to go on Thursday just worried us a little bit more than we were expecting,” Shanahan said. “The fact he could do a little bit today was much more encouraging than what it was yesterday. Hopefully, we have that same result tomorrow.”

Kittle had seven catches for 92 yards last week and ranks second on the team with 15 catches for 187 yards this season.

Kittle has missed time the past two seasons with injuries and San Francisco's running game typically struggles without him.

The Niners are already thin at running back with starter Raheem Mostert out for the season and backups Jeff Wilson Jr. and Jamycal Hasty sidelined. Rookie Trey Sermon was the only halfback who got the ball last week but fellow rookie Elijah Mitchell could return from a shoulder injury this week to provide some help.

Mitchell is listed as questionable but has been able to do more in practice this week.