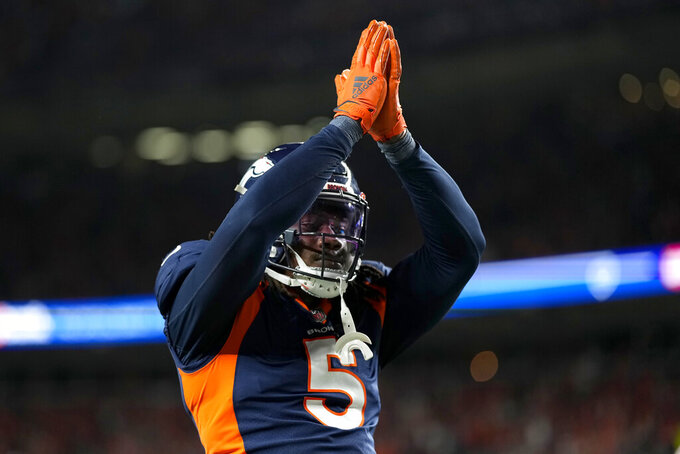 DENVER (AP) — At first, the San Francisco 49ers were actually relieved that Jimmy Garoppolo stepped out of his own end zone for a safety.

It negated Bradley Chubb's go-ahead pick-6 and left the Niners clinging to a 7-5 lead over the Broncos in the third quarter Sunday night.

Ultimately, that misstep came back to haunt the Niners in their 11-10 loss at Denver.

It was one of several miscues in Garoppolo's first game in place of injured starter Trey Lance, who broke an ankle in Week 2.

The Niners (1-2) gave up four sacks, committed three turnovers and converted just one third down against a Denver team that prevailed despite going three-and-out nine times.

Garoppolo's safety changed the complexion of the game in which the offenses were stifled on 22 of 29 third downs and there were a whopping 17 punts.

On second-and-10 at his own 2 midway through the third quarter, Garoppolo back-pedaled in his end zone to buy some time and simply ran out of room, planting his right foot on the white paint and unleashing a pass toward the Broncos' sideline.

It was actually a good thing, too, because Chubb snared the ball at the 3, hopped across the goal line and began celebrating his apparent touchdown.

The whistle had already blown.

Not surprisingly, Garoppolo felt a little out of step in his first start of the season.

He underwent shoulder surgery in March, which dampened his value on the trade market. Then, he didn’t get much work with the San Francisco offense and only threw on the side before he agreed to a paycut to serve as Lance's backup.

His misstep in the end zone sent social media abuzz, and one person who chimed in immediately was Dan Orlovsky, the former Detroit Lions quarterback who took numerous steps out of the back of the end zone before realizing his mistake in a game against Minnesota back in 2008.

Garoppolo finished 18 of 29 for 211 yards with a touchdown and an interception to go with four sacks.

“I’m not trying to make excuses or anything but I’ve just got to get in game shape,” Garoppolo said.

Even with tight end George Kittle back — he missed the opening two games with a groin injury — the 49ers just couldn't sustain any sort of rhythm after Garoppolo's 3-yard TD toss to Brandon Aiyuk in the first quarter.

After that score, Denver defensive coordinator Ejiro Evero adjusted accordingly and the Broncos held the Niners without any points on eight subsequent drives before Robbie Gould's 51-yard field goal made it 10-5 with 14:10 remaining.

That kept the Broncos (2-1) hanging around despite their own offensive struggles.

Russell Wilson, who won for the 17th time in 21 career games against San Francisco, led one long drive all night, a 12-play, 80-yard masterpiece that Melvin Gordon capped with a 1-yard TD run to give Denver its only lead with four minutes left.

Wilson's 2-point conversion was batted down, which meant the Niners only needed to get into field goal range for a chance to win it. But they turned the ball over on their final two possessions.

The other came in 2008 when the Steelers edged the Chargers.

Adding to the Niners' misery, they lost All-Pro left tackle Trent Williams to an ankle injury on the play that resulted in Garoppolo's safety. A cart was brought out for him on the field, but he gingerly walked to the locker room instead and was replaced by Jaylon Moore.

"Hopefully he bounces back fast,” Garoppolo said. “It’s always tough when you lose a guy like that.”