49ers survive once again to advance in playoffs to Green Bay 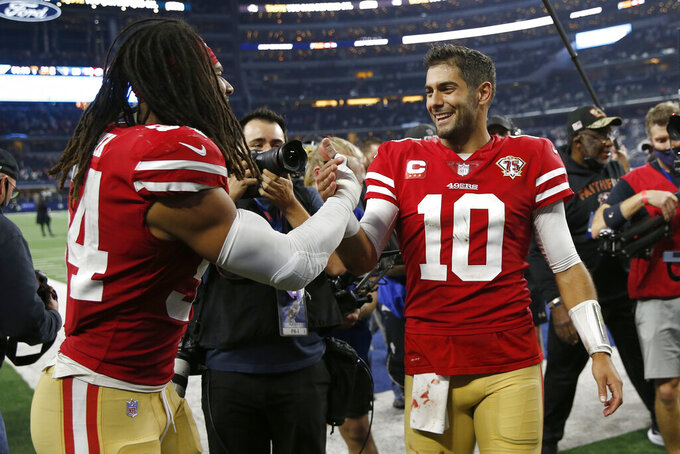 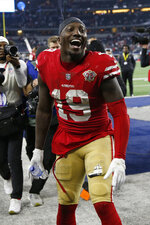 A week after overcoming a 17-point deficit and then holding on at the end to get into the the playoffs, the Niners nearly blew a 16-point lead in the fourth quarter before holding on for a 23-17 win over the Dallas Cowboys on Sunday.

“Just a little bit of a roller coaster,” tight end George Kittle said. "That was wild. A lot of ups and downs. A lot of unknowns. I think the Niners make for great TV.”

San Francisco built the 23-7 lead behind a strong defensive effort, a couple of key third-down conversions by quarterback Jimmy Garoppolo, and big plays on the ground from All-Pro Deebo Samuel and Elijah Mitchell.

A series of mistakes in the fourth quarter nearly squandered it before the Niners (11-7) survived at the end. Dak Prescott's ill-advised QB draw ran out the clock and denied the Cowboys one last shot at the end zone.

That ending came a week after Garoppolo led an 88-yard drive in the final minutes to seal a win-or-go-home game against the Rams into overtime. San Francisco won it with a field goal and a game-sealing interception.

This latest win sends San Francisco to Green Bay on Saturday night for a showdown with the Packers.

“Whenever you have to battle at the end like that, it shows the real team, you can look guys in the eyes and see who is in that moment and ready for it," Garoppolo said. "It’s just going to do us well down the road. It’s not going to be easy going into Lambeau. We know it’s going to be a tough challenge for us, but we are ready for it.”

Pass rush. The Niners had five sacks and pressured Prescott on nearly half of his dropbacks despite losing star pass rusher Nick Bosa to a concussion in the first half. Midseason acquisition Charles Omenihu led the way with 1 1/2 sacks and a team-high six pressures, according to Pro Football Focus. Five others got at least a share of a sack, including Arik Armstead and D.J. Jones, who each had a sack and three pressures.

Special teams. San Francisco's season-long woes on special teams showed up again in the wild-card game. Mark Nzeocha extended a drive in the third quarter with a roughing-the-punter penalty. Then early in the fourth period, Josh Norman lost coverage on gunner C.J. Goodwin on a fake punt.

“If you give a team opportunities like that, it makes it tough to protect that lead like we had,” coach Kyle Shanahan said. “That would be something that would be very hard to get away with going into Lambeau.”

WR Jauan Jennings. The second-year receiver has taken on a bigger role in recent weeks. Even though he only had three catches for 29 yards, all three came on third down to extend drives. Jennings has gotten a first down on 13 of his last 16 catches, with 10 coming on third downs in the past five games.

Garoppolo. The Niners got the win but it was more in spite of Garoppolo in the second half instead of because of him. He missed a wide-open Brandon Aiyuk on a deep pass late in the third quarter to help start Dallas' comeback. He then threw an interception early in the fourth that made it a one-score game, and snapped too quickly when San Francisco tried to seal it late on a fourth-and-1 sneak.

Garoppolo was 5 for 11 for 39 yards and an interception in the second half.

Shanahan is hopeful that LB Fred Warner (low ankle sprain) can practice this week. ... Garoppolo (right shoulder sprain) also should practice. ... DE Nick Bosa is in concussion protocol and Shanahan said: “He seems like he’s in a pretty good spot right now.” ... DE Jordan Willis has a high ankle sprain and will likely be sidelined for a while. ... LB Marcell Harris (Achilles tendon) and S Talanoa Hufanga (knee) could return this week.

18 — Kicker Robbie Gould made all three field goal tries, making him 18 for 18 in his postseason career. That's the most field goals made in the playoffs without a miss in NFL history. Gould made kicks from 53 and 52 yards, becoming the seventh player ever to hit two FGs of at least 50 yards in a playoff game.

The 49ers travel to Green Bay to face the Packers for the ninth time in the playoffs in their history. That ties the Cowboys and Rams for the most playoff matchups between two teams in NFL history. The teams have split the previous eight, with San Francisco winning the last three.