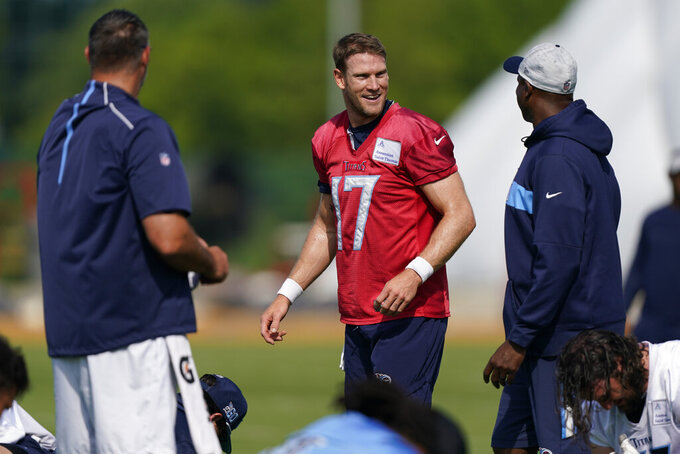 NASHVILLE, Tenn. (AP) — All-Pro safety Kevin Byard made clear at the start of Tennessee's offseason program that the Titans wanted to be the NFL's top defense.

Busy in the final stage of the offseason program, the veteran going into his seventh season isn't thinking big picture.

“I’m not going to necessarily put any great expectations, even though I said we’re trying to be the No. 1 defense,” Byard said Wednesday. "But as of right now, it’s mainly just about learning and trying to make sure we're getting everybody together, learning the schemes.”

The Titans earned the AFC’s No. 1 seed last season in large part because of how much better the defense played. Eight starters return this season, not counting three others who started at least five games apiece, is a big reason they can be even better across the board.

With so many defenders knowing the defense, coordinator Shane Bowen said it's a fine line of using that familiarity to build on what the Titans were able to do last season.

“Hopefully we can turn the page a little bit quicker on those types of things and get a little bit more involved as we go just based on their familiarity with the system, what we’re asking them to do, the culture, the play style, all the stuff that comes into being on this team,” Bowen said.

A team that ranked last by a wide margin in allowing third-down conversions in 2020 ranked sixth in the same category in 2021.

Byard earned the second All-Pro nod of his career in 2021 with five interceptions, while linebacker Harold Landry had a career-high 12 sacks to earn a new contract. Defensive lineman Jeffery Simmons had a career-high 8 1/2 sacks and earned All-Pro votes.

Denico Autry had nine sacks, making the Titans the only NFL team with three players with at least eight sacks. The Titans then tied a postseason record with nine sacks in their divisional playoff loss.

Not bad for a team that used 26 different defensive starters as injuries forced the Titans to use an NFL-high 91 players, most ever in a non-strike season.

Linebacker Bud Dupree also has a year in this defense after working his way back from a torn ACL last season.

The Titans also recently added defensive lineman DeMarcus Walker, the 51st overall pick out of Florida State by Denver in 2017 who's now with his third team. Walker has 12 1/2 career sacks, and being surrounded by so many pass rushers should help him play even better.

“They took a big step,” Walker said. “My goal is to help them take another step.”

The Titans will have to determine a starter opposite Kristian Fulton. Veteran Jackrabbit Jenkins was a salary cap casualty in March.

Caleb Farley, their first-round pick last year, is practicing with a non-contact jersey. Elijah Molden, a third-round pick last year, started seven games. The Titans drafted Roger McCreary out of Auburn in the second round for more depth and also brought back veteran Greg Mabin, who started two games in 2020.

“When we’re all playing well, guys get paid and guys have great stats," Byard said. “So that’s definitely going to be the plan this year.”

NOTES: Dupree was among five defensive starters not at the voluntary organized team activities so far along with Landry, Autry, Simmons and linebacker Zach Cunningham. ... Treylon Burks, the 18th pick overall, deferred to Titans coach Mike Vrabel when asked about using an inhaler during the rookie minicamp. Vrabel said a lot of people use inhalers, including one of his sons. ... The Titans signed WR Juwan Green and waived TE Ryan Izzo. Green spent the past two seasons on the practice squad in Atlanta.