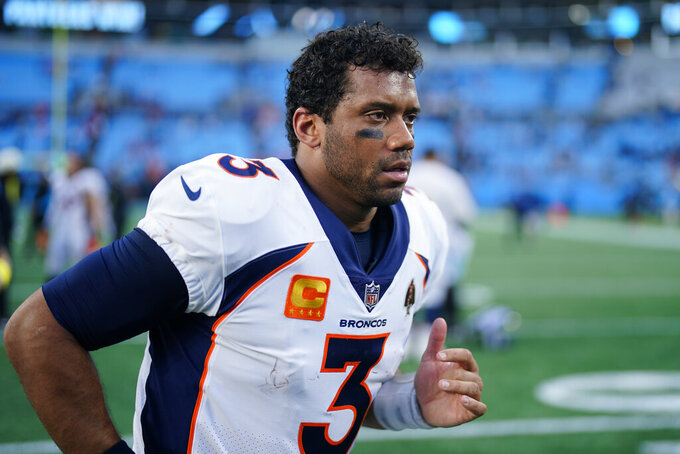 Denver Broncos quarterback Russell Wilson leaves the field after their loss during an NFL football game between the Carolina Panthers and the Denver Broncos on Sunday, Nov. 27, 2022, in Charlotte, N.C. (AP Photo/Jacob Kupferman)

ENGLEWOOD, Colo. (AP) — Whether or not there's a fissure in the Denver Broncos' locker room, there certainly is frustration.

Russell Wilson and Mike Purcell were quick to dismiss their sideline spat Sunday as an emotional exchange between competitive personalities.

“Frustration,’’ Purcell said, was the root of his brief blowup with Wilson during the Broncos’ 23-10 loss to the Carolina Panthers on Sunday.

Purcell had just been flagged for an unnecessary roughness penalty during a 26-yard field goal by Panthers kicker Eddy Pineiro early in the fourth quarter.

As he retreated to the sideline, TV cameras captured him shouting at Wilson, who responded. Purcell spun around and starting shouting in Wilson's face before walking away in a huff.

“Mike and I are on the same page,’’ Wilson said. “He came off after they kicked a field goal, he was (ticked) off. He just said, ‘We’ve got, we’ve got to effin’ go,’ and I agree. We’re on the same page — there’s no animosity there at all.

Wilson arrived in Denver eight touchdown throws shy of 300 for his career, and it took him three months to reach the milestone, which he finally did Sunday with a 1-yard pass to rookie Brandon Johnson with 3:19 remaining.

The Wilson-led offense is a reliable trending topic on Sundays as the former perennial Pro Bowler sinks to new lows in Denver.

For instance, it was pointed out this weekend that Carson Wentz has two more TDs passing this season than Wilson does and he hasn't played since getting hurt Oct. 13.

With seven losses in eight games, the Broncos (3-8) now have to win all of their remaining games to avoid a sixth straight losing season.

A seventh consecutive season without a playoff berth is all but a certainty for a team that hasn't won a game on American soil since Week 3.

And now comes the meat of Denver's schedule, beginning with a trip to Baltimore this weekend, followed by the first of two games against the Kansas City Chiefs, who haven't lost to the Broncos since Sept. 17, 2015.

“I think the chemistry with this group is still great,’’ Simmons insisted. “I think when you put as much into it as you do week in and week out and you don’t get the results, it can be frustrating. So as frustrated as everyone is watching, you can imagine how guys are when they’re the ones out there trying to put in the work and try to win football games.

“And some of that spills over."

Embattled coach Nathaniel Hackett said Monday that he spoke with Purcell and Wilson and “everybody's good. ... it's an emotional game.”

“I think whenever it comes from a player, those guys, that means a lot to them. So, I appreciate his passion and understand it. I just don't want him to get that personal foul in that situation. But besides that, I love when the guys are fired up.”

RB Latavius Murry rushed for 92 yards on 17 carries, including a 52-yard jaunt, in the Broncos' first game since waiving fumble-prone Melvin Gordon.

At this point, everything, including the defense, which is cracking under the weight of carrying the load all season.

WRs Jerry Jeudy (ankle) and KJ Hamler (hamstring), who are showing by their absences how much the Broncos need them to have a fighting chance.

GM George Paton. His 2023 first-round pick that he sent to Seattle in the Wilson trade is now a top-five selection.

12 — Number of drives it took for Denver to find the end zone Sunday. They didn't score a touchdown on their final nine possessions the week before, against Las Vegas.