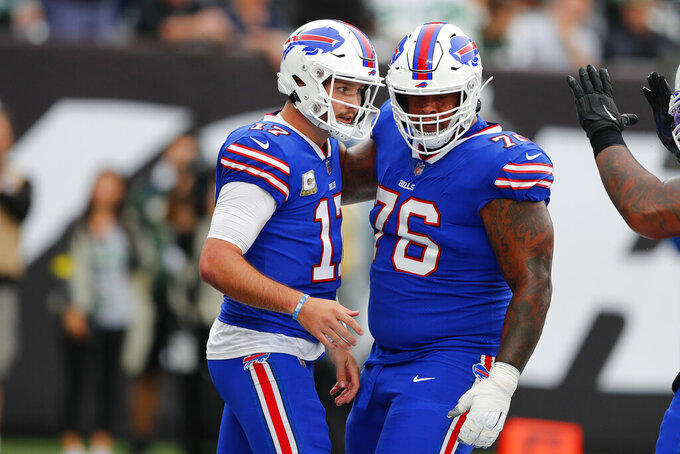 Buffalo Bills quarterback Josh Allen, left, celebrates with guard Rodger Saffold after rushing for a touchdown during the first half of an NFL football game against the New York Jets, Sunday, Nov. 6, 2022, in East Rutherford, N.J. (AP Photo/Noah K. Murray)

TURNOVER DIFFERENTIAL: Vikings plus-6; Bills plus-1.

VIKINGS PLAYER TO WATCH: WR Justin Jefferson. The third-year player selected by the Vikings with the first-round pick they acquired in trading WR Stefon Diggs to Buffalo in March 2020 is second in the NFL with 867 yards receiving and fifth with 59 catches.

BILLS PLAYER TO WATCH: Diggs. The eighth-year player has been Buffalo’s only consistent threat in the passing attack this season. Diggs is tied for the NFL lead with seven touchdown catches, and ranks third with 857 yards.

KEY MATCHUP: Jefferson vs. CB Tre’Davious White with an asterisk. The asterisk is necessary because it’s unclear yet whether White will make his season debut two weeks since being activated to the roster. In his previous five seasons, White has established himself as one of the NFL’s top shutdown cornerbacks, but he has missed nearly a year since tearing a ligament in his left knee.

KEY INJURIES: Vikings CB Cam Dantzler (ankle) was injured in the first half against Washington and is a “long shot” to play, according to coach Kevin O’Connell. ... DE Dalvin Tomlinson (calf) sat out against the Commanders and remains iffy this week. He did not practice on Wednesday. Neither did C Garrett Bradbury (ankle). ... Bills QB Josh Allen (sprained throwing elbow) is listed as questionable, and a decision on whether he can play will likely come down to Sunday morning. ... S Jordan Poyer (elbow) and DE Greg Rousseau (ankle) have been ruled out. ... LB Matt Milano (oblique) is to return after missing one game, while LB Tremaine Edmunds (groin/heel) is listed questionable. ... CB Kaiir Elam (ankle) is listed as doubtful.

SERIES NOTES: The Bills have won four of the past five meetings, including the past two at Orchard Park, New York. ... The Vikings opened the series winning the first seven of nine meetings. ... The Bills’ 27-6 win at the Vikings in 2018 marked Allen’s first career win in just his second start. He finished 15 of 22 for 196 yards with a touchdown and added 36 yards rushing with two scores.

STATS AND STUFF: The Cook family loyalties will be split with Vikings RB Dalvin Cook on one sideline and his younger brother, James, playing for the Bills after being selected in the second round of the draft in April. ... Bills DC Leslie Frazier spent seven seasons with the Vikings including a three-plus year stint as coach from 2010-13, while Vikings first-year DC Mike Pettine held the same role in Buffalo in 2013. ... The Vikings have won six straight for their longest winning streak since 2017 (eight) and their best eight-game start since 2009 (7-1). ... O’Connell is one of only five first-year coaches since 2000 to win seven of his first eight games. ... Vikings QB Kirk Cousins has at least one TD pass in 38 straight games for the longest active streak and the sixth longest of all time. ... Vikings WR Justin Jefferson can set the NFL record for most games with 100 yards receiving in a player’s first three seasons. He has 19, tied with Odell Beckham Jr. and Randy Moss. ... Vikings TE T.J. Hockenson caught nine passes on nine targets for 70 yards in his debut with the team since arriving in a trade with Detroit. ... Vikings OLB Za’Darius Smith, who leads the NFC with 8½ sacks, has the best pressure rate (20.3%) in the NFL among defensive players who have rushed the passer at least 100 times. ... Vikings S Harrison Smith has an interception in each of the past three games, the longest streak since Corey Chavous (three) in 2003. ... Buffalo is 6-2 or better through eight games for the 13th time in team history, and went on to qualify for the playoffs each previous time. ... If Allen can’t play, backup Case Keenum will make his first start for Buffalo after being acquired in a trade with Cleveland in March. Keenum is a 10-year journeyman with a 29-35 career record, and his best season came in 2017, when he went 11-3 with Minnesota. ... Allen hasn’t missed a start since being sidelined four games with a similar injury during his rookie season in 2018. ... Diggs’ 60 catches make up 31% of the Bills total, and two more than Buffalo's six other WRs combined. RB Devin Singletary ranks second with 27 catches. ... Singletary also ranks second on the team with 347 yards rushing behind Allen’s 392. ... The Bills have topped 300 yards in 13 consecutive games. ... In their past four games, the Bills scored just six TDs and two field goals on 14 drives inside an opponent’s 20. The other drives ended with two fumbles, two interceptions with one missed field goal and one on downs. ... With a sack against the Jets, Von Miller upped his active career-leading total to 122 1/2 to move into 20th on the career list. Robert Mathis is 19th with 123 sacks.

FANTASY TIP: With Poyer out and if Edmunds can't play, Dalvin Cook has a chance to find holes against a Bills D which has allowed a combined 382 yards rushing in its past two outings — the team’s third-worst two-game total since coach Sean McDermott was hired in 2017.