At age 33, Houston still adding to sack total with Ravens 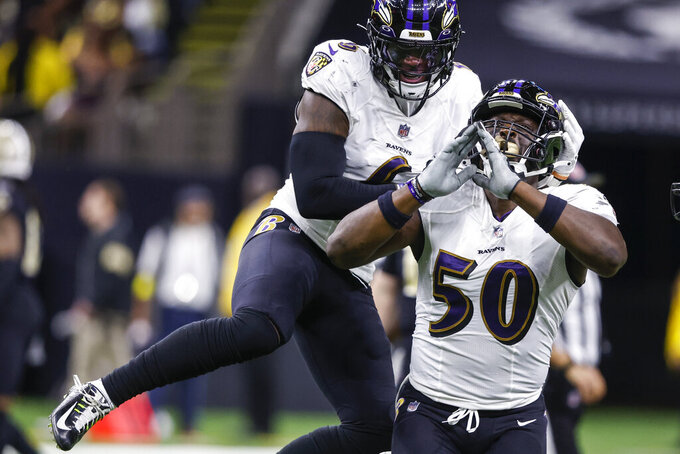 Baltimore Ravens linebackers Patrick Queen, left, and Justin Houston celebrate after a sack in the second half of an NFL football game against the New Orleans Saints in New Orleans, Monday, Nov. 7, 2022. (AP Photo/Butch Dill)

OWINGS MILLS, Md. (AP) — Around this time last year — shortly after he reached the 100-sack milestone — Baltimore linebacker Justin Houston said his son didn't want him retiring until he hit 130.

Now that might be more realistic than it seemed.

“It's looking like it,” Houston said with a smile Wednesday. “Just need to stay on track.”

The 33-year-old Houston already has 8 1/2 sacks this season despite missing three games. Since returning from a groin injury, he has 6 1/2 sacks in three games, and the Ravens won each of them.

“I think it’s the defense as a whole," Houston said. "We’re doing a great job covering. The linebackers playing well, the DBs are playing well, so you’ve got everybody on the same page, it’s easier to get to the quarterback.”

Now in his second season with Baltimore, Houston has raised his career sack total to 110 1/2, and he already has his highest mark in a season since he had 11 in 2019 with Indianapolis. He’s had multiple sacks in each of the past three games, the longest streak in franchise history, and he earned AFC defensive player of the week honors after contributing 2 1/2 sacks and an interception at New Orleans on Nov. 7.

That was the Ravens’ most recent game. They were off last weekend and host Carolina this coming Sunday.

Although he surpassed 100 sacks last season, his season total was just 4 1/2. That was the lowest of his career, aside from a 2016 season with Kansas City when he only played five games.

Houston went to Mexico with his wife, and they talked about his future. He felt good enough to keep playing, but the lack of production was frustrating.

“I turned my phone off, and I really just prayed," he said. "At some point, I just heard ... God said, it was just like, ‘Just give me all of you, and I’ll give you your desires.’ It was just strong, for like two days on my mind just, that’s all I kept hearing.”

This season, Houston had sacks in each of the first two games. Then he played only six snaps in Week 3 and missed the following three games.

Since returning, Houston has only played about 40% of Baltimore's defensive snaps, making his sack total all the more impressive.

“I think it’s very beneficial, especially at this point in my career,” he said. “I think it’s just keeping everybody fresh.”

Houston is part of a defense that also includes veteran pass rushers Calais Campbell and Jason Pierre-Paul, along with second-year man Odafe Oweh. The Ravens might also be getting rookie David Ojabo back from an Achilles tendon injury that has kept him from making his debut, and they recently traded for linebacker Roquan Smith.

Houston, Campbell, cornerback Marcus Peters and tackle Ronnie Stanley had the day off from practice to rest Wednesday.

“I feel great. I think they're doing a good job here keeping me rested, keeping me prepared for the game," Houston said. "We've got a good rotation going, so that's definitely helping, me not having to play as many snaps, so I'm fresh all game.”

NOTES: TE Mark Andrews (knee/shoulder) and RB Gus Edwards (hamstring) were limited at practice Wednesday. So was CB Jalyn Armour-Davis (hip). ... Pierre-Paul (ankle) was a full participant. ... Coach John Harbaugh said Ojabo might play this week, but both he and rookie TE Charlie Kolar (sports hernia) are at a disadvantage coming back from injuries because they also missed preseason work. “They had nothing really stacked up until like two weeks ago,” he said. "They both look really good. I think they could both play, and if we have an opportunity to put them out there, we will.”