Analysis: Tom Brady is losing more than just his cool 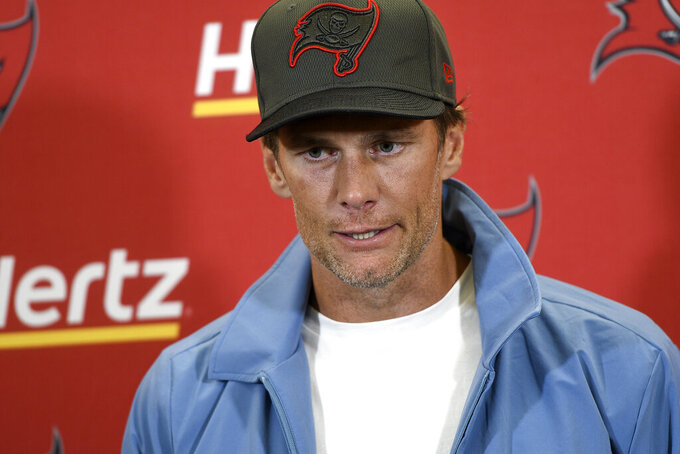 Tom Brady is losing more than just his cool.

Games are starting to slip from his grasp and so, too, is his touch.

The seven-time Super Bowl champion, who missed nearly two weeks of Tampa Bay's training camp to tend to a personal matter this summer, gave his offensive line a tongue-lashing during the Buccaneers' 20-18 loss at Pittsburgh on Sunday.

“There's too many plays we're not making,” Brady said after the Bucs fell to 3-3 — his worst start after six weeks since 2012.

“We didn't earn the win. It's a game of earning it and it's a game of playing well and performing well and we're just not going a good job of that,” Brady said. "I don't think we've done it for six weeks. I think we're all playing less than what we're capable of.

“We all have to look at ourselves in the mirror,” added Brady, "and figure out why.”

That's precisely what Twitter was saying after Brady's dressing down of his offensive line as his latest sideline tirade came after he missed his team's Saturday walkthrough to attend the wedding of New England Patriots owner Robert Kraft.

Coach Todd Bowles insisted Monday that Brady's trip to New York City to serve as part of Kraft's star-studded guest list had nothing to do with the Buccaneers' loss to the Steelers, which dropped them into a tie with the Atlanta Falcons atop the topsy-turvy NFC South.

Bowles also maintained that his 45-year-old QB isn't receiving preferential treatment in his 23rd NFL season even though he was allowed to miss a chunk of training camp for personal reasons that Brady has not discussed publicly since rejoining the team after an 11-day absence.

“He works as hard as anybody,” Bowles said. “Special treatment — there have been a few guys that have missed meetings and some practices for some special thing — that just doesn’t get publicized because they’re not him. It just kind of comes with the territory. You don’t worry about it too much.”

What is worrisome to his fans is Brady's dramatic drop-off following a newsy offseason in which he retired in February, unretired a month later and after missing much of training camp found his marriage to Gisele Bundchen the subject of rampant tabloid speculation centering on his unretirement.

Brady's 3.2% touchdown rate while attempting to pass is a career low and he has just eight TD passes in six games after throwing a combined 96 in his first two seasons in Tampa, including the playoffs.

He had 17 TD passes by this time a year ago and 14 the year before that.

The Bucs are averaging 20.2 points per game, down from 30.1 points last season. Take away safety Mike Edwards' pick-six in Week 2 and the Bucs' offense is averaging a mere 19 points per game.

The Falcons' fourth-quarter rally fell short in a 21-15 loss to Tampa Bay in Week 5 thanks largely to a disputed roughing-the-passer penalty on Atlanta defensive tackle Grady Jarrett. Even that fortuitous flag turned out to be costly for Brady, who was fined $11,139 for trying to kick Jarrett following his takedown.

Asked after the loss to the Steelers and their second-string secondary what was his message to his teammates, the profanity-laced berating of his O-line aside, Brady said, “We have to score more points.”

That's the rallying cry across the league where a dozen teams are averaging fewer than 20 points per game and the 49ers (20.1) are just outside that mark along with the Bucs.

At 15.2 points, the Broncos are the lowest-scoring team in the league as Russell Wilson continues to struggle making quick decisions behind a banged-up offensive line. In four prime-time games so far, the Broncos have managed 16, 11, 13 and 16 points, losing three of them and overcoming 10 three-and-outs in the other.

Five times Denver's defense has held opponents to 17 points or fewer in regulation, leading Troy Aikman to declare after Denver's 19-16 loss to the Chargers in overtime Monday night that “it's hard to imagine you can play that well defensively and hold the score down that low consistently and have a losing record.”

The reasons for the paucity of points are plenty.

— Several teams didn't play their starters in the preseason and have spent the season ironing out the wrinkles on offense.

— "Shell" defenses popularized by former Broncos coach Vic Fangio in the red zone are throttling offenses inside the 20-yard line.

The troubles in Tampa might run a little bit deeper.

“It doesn't matter who you're playing, if you're not making the plays, it doesn't matter if it's the Steelers or the Chiefs for the Packers or the Saints," Brady said. “You either make the plays or you don't. It's a production business.”

And no, Brady stressed, it's not just the offensive line's fault.

“It's all of us. It's our whole offense," Brady said. "We have to do a better job in the run game, in the pass game. Everyone has to do a better job. Obviously, there's no position that's performing at an elite level right now.”